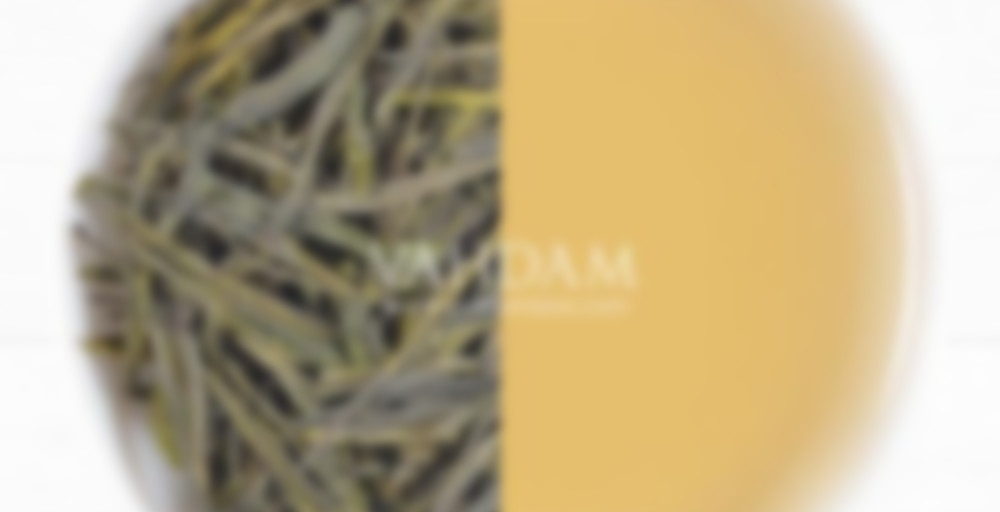 An exotic limited edition green tea manufactured on order at the Avaata tea estate in southern India. Long Ding refers to the prized ‘Kaihua Long Ding’ tea originally manufactured in China. Characteristic of exotic long leaves with thick sharp ends, the minimal processing of the leaves post harvest gives it a delightful visual appearance. Only tender leaves are used to manufactured this intensely aromatic organic tea. The champagne like liquor is majestic. The flavour is complex yet mellow and smooth with hints of sweet grass and fresh greens. A long sensational finish follows. A palate pleasing cup which is best served straight.

Okay well after trying a number of my Indian samples (of which I have.. like 25), I kind of gave up all hope to review them, save for an Avaata white, but I pulled this one out on a whim because I’ve actually got very little tea at the moment and I can’t wait for my new shipments to arrive ugh, anyways, I opened this to a pretty unique aroma, a very soft sort of soapy, a very indian floral aroma, anyways then I started to pour them out into my presentation.. bamboo scoopy thing, and I was just startled I mean look at these leaves!
https://www.instagram.com/p/BM0mDwoDM4w/?taken-by=mackie_tealife&hl=en

so many huge, long thin needles, it’s obviously very carefully processed, and this is something I’ve always felt is missing from typical tea pretty much from anywhere in the world outside of China. Now there is decent amount of breakage in this one, so I’m just going to pick out all of the whole leaves and brew just those, because I can.

oh my god, okay in the gaiwan it smells pretty much exactly like a laoshan green and oh okay this gonna be wonderful, I’m not gonna rinse this one.

oh my goddddd after the first steep, the leaves smell again even more strongly of a laoshan green, but there’s this fruitiness and this like meatiness thickness too, and then something that reminds me of a sangria tea I had from teavana (I’ve never had sangria so I don’t know if this smells like that..) but okay I’m so excited to drink this.

okay well on the face of it, there’s a very familiar soybeany, spinachy taste, a grapey fruitiness and a very indian florality in the finish akin to darjeeling black teas, there’s a certain unpleasantness to it though, I’m not sure what it is, but the body is also thin, I’m going to attribute that to the first steep though, so okay well anyways

Okay nevermind the second is also thin, but lots of new flavours, still very green, but a bit more grassy, very sweet as well this time, some very pleasant bitterness, there’s a very odd fruitiness, it’s like.. I wanna say it’s a combination of orange and blackberry? and there’s a more mellow floralness, less perfumey

Okay okay okay it’s thicker in this one, it’s so hard to describe the tastes.. it’s very bitter and satisfying and sorta green beany and sort of a pear-like taste, lots of spinachiness and like.. I don’t know, it’s vaguely citrus-like and smokey!! I didn’t notice the smokiness

I don’t know, for some reason it reminds me of chow mein. And now I’m craving chow mein..

oo I got a nice strawberry aroma like a minute after finishing the sip, also the sweetness is very sheng-like. This is some weird tea
Oh ew, it’s like lemongrassy and sour and blech I think this one’s finished..
jk the next 2 have still been good, it’s developed this lovely creaminess and really it’s starting to taste a lot like a weird young sheng

I got 10 steeps out of it though, that’s pretty impressive for green tea

I’m majorly impressed that you even had the stamina/will/attention span to go through ten steeps! I think the most I’ve ever done was four and by then was ready to move on to something else.

Do you drink gongfu??

Do you drink gongfu??