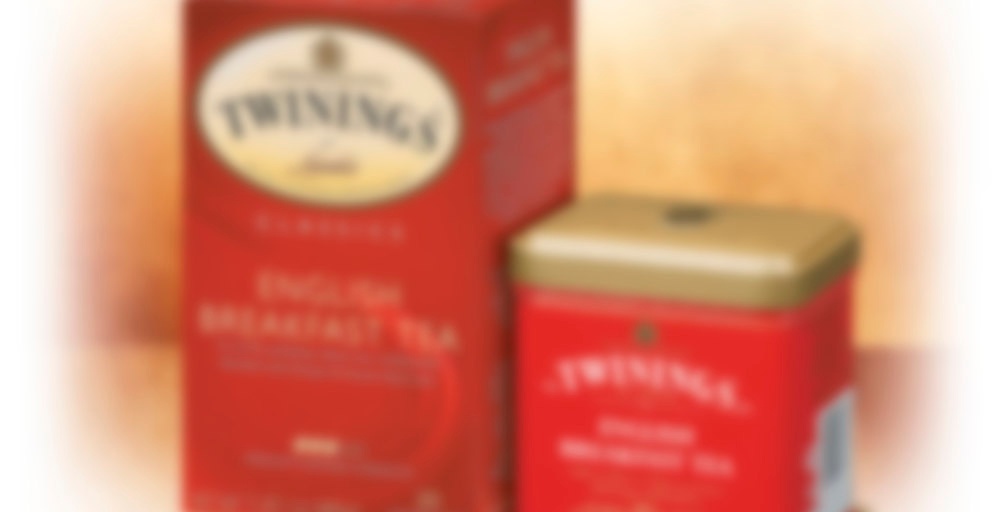 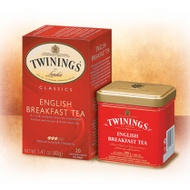 with 408 Ratings Rate this tea Rate This Tea

English Breakfast is our most popular tea. To create this well-balanced blend, we select some of the finest teas, each with its own unique characteristics.

Tea from Kenya and Malawi, provides the briskness and coppery-red colour while Assam gives full-body and flavour. The robustness from these regions is complemented by softer teas from other regions.

The combination yields a complex, full-bodied, lively cup of tea that is perfect any time of day.

I feel like calling winter into my office at 3:45 on a Friday and telling it to find another job. Church was cancelled today because of black ice. I had a suspicion last night when it started misting on the windshield. So I declared it a house pants day for all of an hour before they started bugging me and I had to find actual clothes. I can’t believe it either. So now I have decided its Cheapster Steepster Sunday. At least till it starts bugging me. Starting with this tea bag sip down. I used to really be apathetic toward EB. I used to call it beige. Not bad just never remember what I just sipped. This one has actually grown on me. It is smooth, malty, and comfortable. Sometimes that is enough.

Indeed ‘tis. I was at a friend’s house, and he apologised for only having Yorkshire Tea in because I’m known as the Brewmaster and all, but, like, sometimes you just want a simple cuppa!

Yes! Or a gentler approach: I’m sorry winter, you have been eliminated. Please go back to your workspace and pack your kit. Not sure if that is my Heidi Klum or McKenzie Westmore interpretation.

Yes K S, I can totally picture you doing a perfect impression of Heidi Klum, lol.
And I so agree with your comment about what Sami said…some common teas are like old friends are they not?

My mother will pretty much only drink her supermarket’s own brand Earl Grey. If she’s visiting company, she’ll bring a little bag of tea with her.

(To be fair, I’m out of town for 5 days coming up, and I plan to bring enough tea to keep me going)

Also, please do make winter stop – I’m trying to bake bread and my flat’s so cold that the dough won’t prove! :(

What I heave learned about china/beijing today:

Take advantage of uber nice hotels since what’s outside the hotel is pretty gross.
And secondly….as a white foreigner in said hotel, when you ask for tea with breakfast you won’t get a choice…they will bring you English breakfast twinnings….even if they have gaiwans and three different (at least) kinds of tea on their tea bar lol

So I had this. Wheee!

Haha, lucky you.. My dad loves this tea. I hope your trip over was smooth and that you continue to have many more “exciting” tea experiences! ;)

Have the time of your life! Sounds exciting!

Ahh I musta been lucky! I asked for tea for breakfast and they gave me dragonwell!

Who would think you’d go all the way to China to get a cup of Twinings EB? ;)

I think I found “real” tea…though I’m not sure yet how to have it haha. Ill figure it out.

Working out of a temporary/makeshift office this week…but there’s a Keurig in it. The problem is … I don’t think I’m very impressed with it. Have had two cups of Twinings EB and I’m not getting much but “hot leaf juice” flavor out of this. Something about brewing through all that paper and plastic makes me wonder how any of the real tea personality can get through.

you poor thing, you’re really having a time lately, aren’t you? a good cuppa is hard to get sometimes, and it’s not too much to ask for, either :(

Thanks for the empathy! I’m among friends and doing something I love (writing kids’ curriculum 12 hours a day; yes, I’m nuts) so I’ll bear the inconvenience as gracefully as I can ;)

Use the Keurig to heat the water and loose the k-cups. Ick!

I have had only one tea from the Keurig but it was unpleasant enough to keep me from trying more. I hope you’re able to get a decent cup soon!

you need any item of this nature-ASAP http://www.ebay.com/itm/INSULATED-GLASS-TEA-THERMOS-9-oz-Tea-Pot-Design-Infuser-Mug-Handle-Tumbler-/160649004516?pt=LH_DefaultDomain_0&hash=item25676d45e4 or one like this http://www.ebay.com/itm/MidCentry-Modern-Swiss-BODUM-ASSAM-5-L-TEA-PRESS-POT-New-NwoB-/330810442508?pt=LH_DefaultDomain_0&hash=item4d05d6c30c that you can find for a good deal, it’ll save you, honestly

I may have been off of Steepster for a while, but I haven’t left my teas behind! I actually had to go out and buy a second tin of this and it is almost halfway gone now because of my not so secret obsession this winter: chai!

Yes, I’ve been perfecting my own dry chai spice mix to make an easy and quick stovetop chai for the mornings to try to get myself off of coffee. I have found out that the reason I keep slipping back to coffee is because of the overall savory feel-good mouthfeel I believed is also referred to as umami.

So far I have figured out the spices that I want: cinnamon, cardamom, and ginger being the top three players with nutmeg, pepper, and occasionally clove playing a part depending on what I want for the day. And fresh farmer’s market local honey being the sweetener instead of plain ol’ white sugar.

Normally I don’t have anything against coffee, but I have discovered that when I drink it in the morning, I don’t have any types of tea at all and I am less likely to drink water throughout the day. I have a theory that this is a hold over from when I worked at McDonalds and didn’t have time to drink anything else. So, that is why I’m trying to kick the morning coffee. Besides, chai tastes a whole lot better on the cooler autumn mornings than hot coffee for some reason.

Oh yeah. There were two months where I actually went out and got a latte every morning after I stopped working at McDonalds. That’s when I realized I had to do something because my money was disappearing quickly.

I finally was able to try out my new tea thermal! I ordered the Copco tea thermos (http://www.amazon.com/Copco-2510-4600-Tea-Thermal-Stainless/dp/B0028N6OLQ/ref=pd_sbs_k_1) which has a twistable infuser so you can stop steeping without having to dump the leaves. Unfortunately the inside of the mug is plastic, not steel…deceptive, because the outside is stainless steel!

Anyway, I decided to christen the thermal with one of my favorite teas, English Breakfast by Twinings. I heated the water and milk to boiling, put a little under 3 teaspoons of leaf in the infuser, added some Splenda and honey, and let it steep for a few minutes. The first thing I noticed was that the tea is HOT! And it refused to cool down until like an hour later…good if you’re planning on packing your tea for a long trip, but bad if you’re impatient like me :(

I’ve never made English Breakfast outside of the Zarafina, so it might have just been my weird steeping methods, but the tea did not taste very good. It actually tasted a lot like Irish Breakfast tea does…malty with notes of brown sugar and, um, sweet potato. I didn’t taste the delicious caramel-honey flavor English Breakfast with milk and honey usually gets. I don’t know if I added too much leaf, or oversteeped it, or if the temperature was off. I’m increasing the rating a little, just because before today, this tea has never let me down.

This was my caffeinated cup of the day. And it was a good cup of tea. I’m looking forward to days where I can have whatever I want. One of my first little projects will be to compare breakfast blends in one sitting. Then I’m going to compare different types of blacks in another sitting. And life will be grand. :) (and it will all be documented on Steepster.)

Cool, I honestly have a hard time telling ‘breakfast’ tea apart unless they happen to be really good or really hideous.

I look forward to the notes!

Yes let us know the good bad and ugly

Hi all!!! I miss you all and wish I had time to keep up! I am currently both working and getting an MBA, so drinking tea is in myschedule, but writing about it is pushed back for later… :(

I had this tea in the hotel today while travelling, it was OK, but tasted delicious as I have gone for almost a week without tea and was in withdrawal mode! It was a bit astringent, but that may have been due to over-brewing since the tea was passed to me with the bag already in the cup! Will leave the numerical rating to a second tasting.

Have a good weekend everyone! Off to class…..

Nice to see you on here again! Hope you’re not working too hard. :)

Just wanted to pop in here and say I miss you. Hope your work and MBA is going well!

Aww! I miss you too!!! I can’t wait to graduate and get back to Steepster!!! All is going well, just insanely busy… To add to the craziness of it all, I got engaged!!! I hope I survive all of this insanity! :)

woot woot! grats on the engagement!

Yesterday was my birthday and I wanted to have a special cup of tea. I had a few kinds.. but nothing incredibly special. I couldn’t fully enjoy them because I was suffering from the beginning of a bad cold — sneezing, watery eyes, sore throat, cough, sniffly nose. Not fun. Today, it’s now much worse & at this point, I can’t taste much of anything.

I had a nice cup of this tea & milk earlier today when I could still taste. It was a little bit malty and creamy — very enjoyable. Even if I could taste a bit more, I’m sure I would enjoy this tea for those times when you just need a cup of english breakfast tea & milk. Hopefully this cold goes away quickly and I can get back to sipping my tea & enjoying the holidays!
Yours I Like This
13 likes
8 comments
Edit

I think I had my first English Breakfast this morning. yum! Happy late birthday and feel better!

Thank you so much Tea Sipper, Indigobloom & Angrboda! :)

Happy Belated Birthday! I hope you were able to get some time off and that you feel better soon!

I was craving a hearty tea with milk and sugar- comfort foods, you know- and decided on this one. Nice and full bodied, malty, smooth. The milk rounds it all out, and the sugar brings up the tea flavors, brightening the cup a bit. Just what I needed on a Monday morning.

At the bottom of the tin. I’m thinking this one might be getting stale. Instead of smooth and malty it’s more bitter and peppery. Still a decent cup. Especially when shared with a friend.