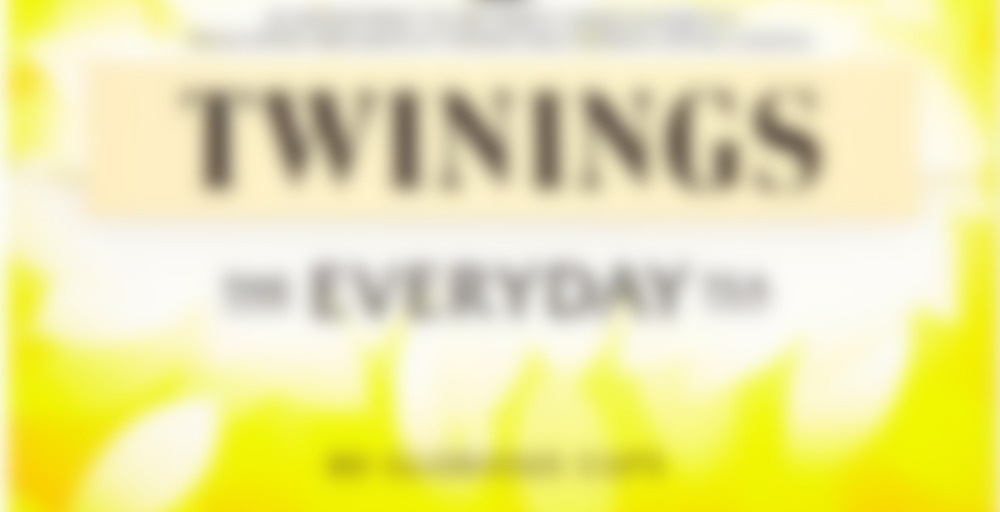 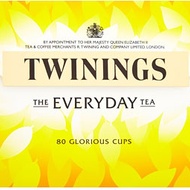 Because Twinings new Everyday Tea combines a traditionally strong base of African and Indonesian teas, with the rich, malty taste of Assam. This is perfectly complemented by hand-picked Yunnan tea; a rare, but essential ingredient that gives a special and unique finish. The new Everyday blend is an everyday tea with more taste, designed for everyday drinking, helping to “get you back to you” all weeklong.

I’m in a bit of a funk…not just tea-related, but life/work related (or that’s how it feels, anyway). The only thing I’m making progress with at the moment is my stitching, which is odd because usually I have to be in the right frame of mind for that kind of thing. Instead, it seems to have increased exponentially in importance in relation to pretty much everything else. I think maybe because it’s totally different to my job, and when I get home I really do just want to switch off and lose myself in something unrelated to the day.

That kind of means that at home I’m drinking mostly this one – Twinings Everyday. It’s pretty good as “normal” tea goes. It’s strong, malty, reassuring kind of stuff. I don’t have to think about it at all. I’m still drinking “proper” tea at work, but I think now I’m starting to associate it with work, and so it’s become one of the things I don’t do at home in an effort to not think about work while I’m not there.

Clearly I need to sort myself out, but other than applying for jobs I’m not really sure how to go about that right now. I want to move out of admin, but I don’t know what I’d prefer to do instead and that’s at least half the problem.

I know things will come out on an even keel sooner or later, because they have done before, but I’m just not feeling myself at the moment and that’s why I’m not really posting anything new. Basically, I await the return of my mojo.

It makes sense that you’re using the stitching to get into a better headspace at home. I know that being unemployed was one of the big factors why I started going into tea a few years ago – it gave me something nice to focus on.

What if you switched to bagged tea at work and loose leaf at home? That way you have better tea to go with relaxation at home.

I hope you can find your mojo soon!

Boring review today, I’m afraid. I’ve been really busy this weekend, with my parents visiting me at uni, having an essay to write and also staying up until ridiculous hours to watch the NBA all star weekend (being an English NBA fan really sucks, the time difference means that if I want to watch a game I usually have to wait until like 2AM before it starts). I haven’t really had time to play around with teas as much as I usually do, so I’ve mainly been drinking bagged generic black tea, or coffee to keep myself awake. This particular tea wasn’t even mine – I nabbed it from my parents’ hotel room. I had this with milk and one sugar (one of those crappy little pots of milk) and even with the plastic-y tasting milk it was a very good cup of everyday tea. It was actually nice to give my taste buds a rest and just have a simple brew, and for a plain teabag this was pretty much as good as I expected.

I would recommend this tea, but only if you don’t have a major thing for loose leaf. If you’re looking for ‘everyday’, it’s pretty decent.

A tea bag from Izzy, thank you — I guess this is a tea for today morning, a simple tea, a caffeine boost, but not trying to find some flavours and such. As I have received it recenly, I guess it’s new blend.

This tea exactly delivers that what they say: rich and full bodied. It’s indeed full bodied tea; pretty much rich flavour and almost 3 minutes steeping was quite a lot.

I didn’t add any milk, even it is suggested for longer steeps. It was nicely astringent and a bit bitter, but I have been expecting that. Niko said it reminds him Lipton Yellow Label and I have to disagree. The Lipton tea is way more rough, their tea essence is my nightmare in pure blacks, while this was typical black tea flavour. It’s not though autumn leaf pile or some other “good” flavours. It’s a bit tannic, and “tea-ish” Don’t expect you will find anything else.

Not a tea I would drink daily, but better than Czech Pigi čaj (a bestseller here (rolls eyes) ).

There was 2 bags of this tea in my Twinings pineapple&grapefruit green tea box along with useless coupon. I have never before seen Twinings everyday tea, nor tasted it. Even this green tea box was new to me, found it from shop specialized to selling dried fruits, nuts, organic foods, teas and so on. You don’t find this from market.

So to the review! Lipton yellow label, yes, that is what this tastes like. I hate yellow label, and I haven’t tasted it for months, but that taste still haunts me. This is only slightly better than yellow label, this taste is more light and smooth, not that kind of sting like yellow label. I don’t like the aftertaste that tastes in your mouth for minutes.

I don’t recommend this tea for anyone, and I would not EVER buy this tea. Sorry if this review is bit harsh, but this tea reminds me too much of Yellow label. Why Twinings? Just why???