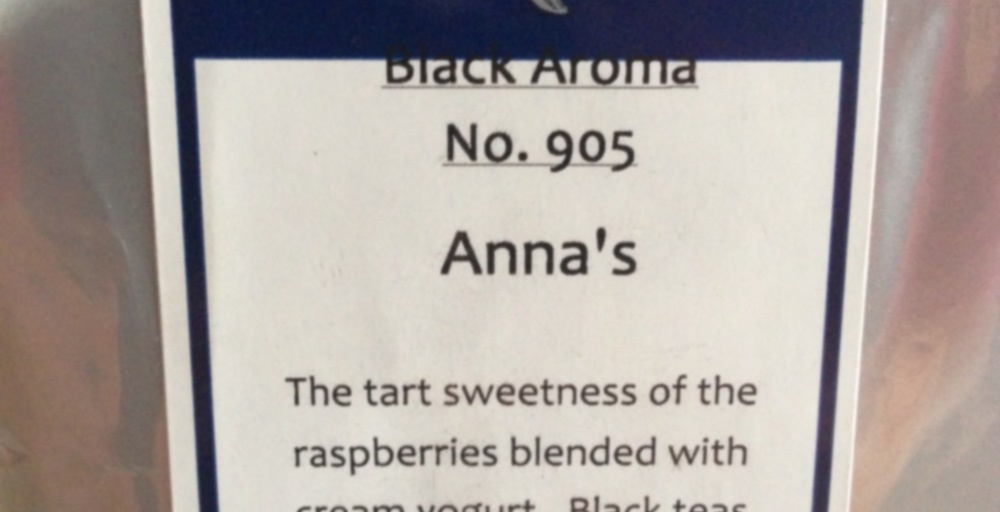 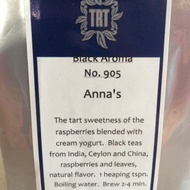 The tart sweetness of the raspberries blended with cream yogurt. Black teas from India, Ceylon, and China, raspberries and leaves, natural flavor.

As I mentioned in last night’s note on Marco Polo, I usually only steep that one for 2 1/2 minutes. It is fussy, but it is worth the trouble because you get a really amazing cup of tea. But hubby was a little disappointed in last night’s pot of tea because it went for about four minutes before I got the leaves out. I told him I would try to make it up to him soon by making this one, Anna’s from Tin Roof Teas. It has a similar taste but the base is more forgiving and a bit smoother, without being a generic Ceylon base. I am pretty sure there is some Keemun in this base and possibly a little Darjeeling.

He tried it tonight and said he liked it better than Marco Polo! At first he said he thought it was more floral, which I thought strange because there is no floral flavor at all in Anna’s, yet there is in Marco Polo. He adds milk and sugar to both, I take them plain. The bottom line was that he likes this one better, and that is great because it is less expensive.

The bag I sent to my oldest daughter’s BF in Ireland reached him today and he has already tried it. He liked it as well, and commented on the fresh berry taste. So it is a hit in general, and is somewhat comparable to Marco Polo, Paris by H&S, and Tower of London.

I live in NC too, and discovered Tin Roof Teas recently, I love that place! It’s about the only tea store that is really good in NC. Have you found any others that have a nice selection?

A Southern Season has a lot of tea but some of it doesn’t have the quality I would like. I have also gotten some misinformation from people working there, but it was my starting point for loose leaf. Teavana in Crabtree Mall and Streets at South Pointe, but I don’t really like their tea much and it is soooo expensive. I love Tin Roof Teas. There is also Old Wilmington Tea down at the coast but I haven’t been there yet. Just over the border, the Calabash Tea Room has some teas for sale in the front building, mostly repackaged Harney and Sons, American Tea Room, etc. Nice to meet you! Are you near Raleigh?

Oh, I’ve seen Southern Season listed before and will have to definitely try it now. I’m not a huge fan of Teavana either, they always seem very pushy to me. I actually live in the Greensboro/Burlington area but try to stop by Tin Roof Teas each time I go. I’ve had nothing but great experiences there – the staff are always so patient and helpful! It’s nice to meet another tea person in NC finally! :)

I went to college at UNC-G! I live in Fayetteville so it is about an hour and a half for me to go to Cameron Village and a little farther to A Southern Season. I love ordering from Harney and Sons and Teavivre. A Southern Season has a PDF of what is available in their daily teas and on their fine tea wall. They also carry a lot of prepackaged teas like Mariage Freres, Steven Smith, Harney, RoT, Twinings, and on and on. They have all kinds of gourmet food, a restaurant, a take out deli counter, hand made chocolates, and if you go, be sure to visit Night Gallery/Branching Out in the same mall. Wonderful mix of antiques, clothing, and garden decor. So eclectic, and they are recently featured in Victoria Magazine.

Ohhh, I went to UNCG too! I got a degree there, but am now going back to school for nursing at GTCC. We live in Whitsett (right outside of Burlington), so it takes me about 50 minutes to get to Tin Roof Teas, which isn’t too bad. I usually plan to go when we are passing through Raleigh or have someone to pick up at the airport. I am definitely going to check out Southern Season. Harney & Sons is my favorite brand, and I recently discovered Steven Smith. I do most of my tea ordering online since we don’t have that many local stores here (besides TRT), but I love those little stores that carry other brands so you can get a little bit of everything to see what you like. I tend to go overboard if I am ordering online, I feel like I have to get everything I’m interested in! Thanks for all of the tips about Southern Season, I can’t wait to visit!

Have you contacted Teavivre yet for free samples to taste? They are amazing! Great service, and usually fast shipping though my last order got held up in Hangzhou for some reason. They have high quality tea, excellent prices, and always send a sample with your order. Free shipping over $30 and a rewards points program like H&S. they have sent me four boxes of free samples so far, and there is usually enough for about six cups of tea without counting resteeps.

You know, I’ve heard so many good things about Teavivre, but just haven’t gotten the chance to try them yet. I am definitely going to check them out today though, that will be my treat for myself during my breaks from studying! Do you know if Harney & Sons starts the reward points automatically? I actually didn’t know they did that and didn’t notice anything about that when I placed my last order. Is there a place to check your points on the website?

When you go to Harney.com, it says My Account over to the right near the top. When I started buying there, they set me up automatically when I made an account with them. The Millerton always does reward points, but theirs are separate. The nice thing about Millerton is that you can buy different amounts and just get tin refills, etc. and sometimes they have tea the website is sold out of. If you didn’t set up an account to order, but ordered as guest ( if that is possible) I bet if you set up an account and didn’t see points, they would probably pull our order history and give them to you. Their customer service has been really great for me. And do check out Teavivre! They have sent me so much free tea…which I love so much that I end up buying it, and so do my friends!

Thanks so much for the info! :)

One of those lovely close-to-perfect days where you want to push “pause” and leave it there. Slow, steady rain all day; temps in upper 60’s. Took a travel mug of this with me on a trek to North Arkansas (Google “Crystal Bridges Museum” … it was great!).

If you put this, Marco Polo, and H&S Tower of London Blend in front of me without telling which was which, I would be hard put to tell the difference. This is berry-creamy sweet, has a great quality tea base, didn’t need a bit of sweetener. Thanks to ashmanra for the treat!

Ooooo… I have been wanting to go to that museum. We always end up in Eureka & Hot Springs when we go to Arkansas, though. I’d love to take a little detour to the museum.

We have a running joke about “next time, we’re going to Eureka Springs.” We’ve been trying for decades and it never happens. Just take a Dramamine (the road is curvy!) and head west from Eureka on Highway 12. And stop at War Eagle Mill—old working grist mill with a craft shop and a little cafe that serves tea and pecan cobbler.

We have been to the mill. Perhaps Mom & I can stop by the museum and Savoy Tea Co. on the way home. We are doing Hot Springs and then Eureka so heading west on the way home is quite do-able.

I had high hopes for this tea when I discovered it at Tin Roof Teas. I love fruit-flavored black teas and I love this tea store also. The dry leaves smell just like raspberry yogurt and the tea liquor aroma smells like warm, tart and sweet raspberries. In the past I haven’t really loved this tea, but after experimenting I’ve found that I enjoy it with just sweetener added, which enhances the berry flavor. If milk is added it brings out the creamy, yogurt flavors, which I apparently don’t enjoy as much. This tea would probably be excellent iced as well. I am surprised that I don’t love this tea more, especially since other reviews compared it to Tower of London by Harney & Sons, which I love. I think the Tower of London blend has more of a honey flavor to it, while Anna’s is obviously a yogurt flavor and that may explain my non-love for this tea. I like it, it’s enjoyable to drink (maybe just not every day), but it doesn’t compare to Tower of London in my book.

Boiling 3 min, 0 sec
Yours I Like This
9 likes
4 comments
Edit

I love this one! It reminds me more of Marco Polo than Tower of London, though. You are right – ToL is so honeyed, while this one is tangy like yogurt or sour cream. It has all the berry goodness of Marco Polo but not the fussy, easily astringent base. I have all three, but I will be letting Marco Polo go off my shelf when I finish it.

Yes, Anna’s is reminiscent of sour cream! It made more sense to me when you said that! I haven’t tried the Marco Polo but I love the Tower of London blend!

Same here! When I first went loose leaf, I mentioned wanting to try ToL. It was sold out at Harney at the time, and hubby searched and searched online until he found a tea shop that had some. He gave it to me on our anniversary. After that, I begged Michael Harney to make it available loose leaf, and he agreed to mix up one pound for me. I asked for three, then someone else asked for two (this was all happening on Facebook) and someone else asked for a pound…pretty soon he just said OKAY OKAY! And made it available loose leaf for everyone! :) I love it because hubby looked so hard to find, and he likes it, and there are few flavored teas that he likes!

Oh what a nice story! I actually have the little sachets of ToL, but I will certainly have to try the loose leaf now!