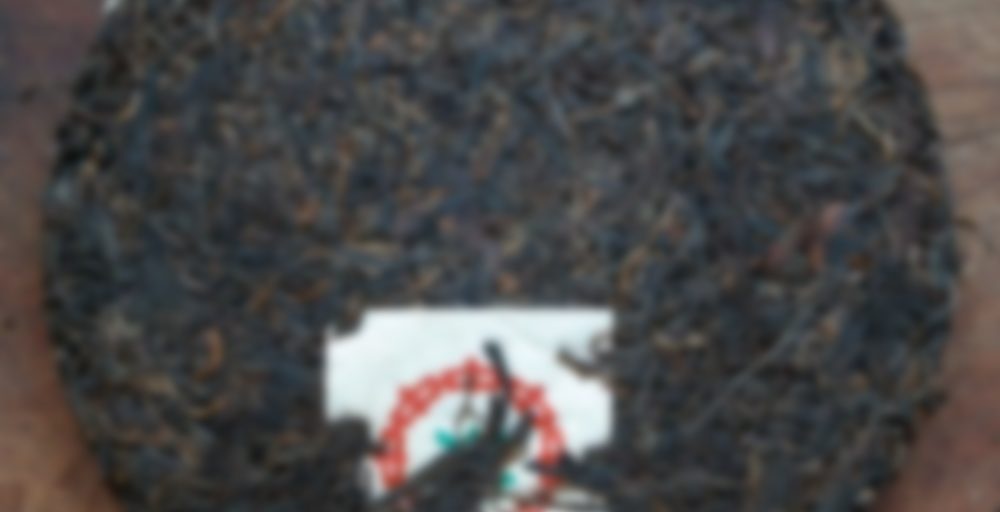 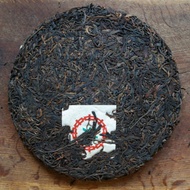 On the wrapper you will see something like this: high mountain, wild, high quality Menghai tea. It comes from unknown factory and the wrapper was customized for Hong Kong customer order. For several years tea was stored in Hong Kong but in natural storage condition: so it is not traditional HK storage but natural HK storage in humid climate. Then the tea was moved to Taiwanese dry storage. So the tea became quite dark but did not loose all its young character. When you brew Gaoshan Bingcha, you will find forest groundcover, sweet autumnal honey, tree bark dryness and some hidden yellow flowers smell. What makes me feel this tea is real gaoshan cha is incredible huigan (returning sweetness) coming from bitterness and staying at the back of the tongue and throat for the long time.

100C, 5g/100mL.
Again, received from fidgetiest, I’m uploading a few tasting notes tonight.
The rinsed leaves smell like smoke and green hay to me. On first steep, I just wrote “whoa” and then skipped to the next page apparently. This is thick and rich, not quite like anything I’ve had before but this is my first aged sheng. I wrote down that this smells like wet wood and citrus rinds. Steep 2, this is definitely bitter, but no astringency until like 5 minutes later when my mouth suddenly dried up.
Steep 3: formaldehyde, cinnamon and ginger, the latter two are definitely more pleasant than the first which just reminds me of anatomy lab.
Thankfully by steep 4, I’m getting sweetness, astringency, but no sour acid refluxiness like other shengs give me which is a plus. I also felt like I was floating, feeling light.
By steep 6, most of the taste was in the nose, ether retronasal or aroma though nothing was left in the cup afterwards which I found very odd.
Started to become just sweet+bitter melon by steep 8 but I kept going through and past 13 when I also noted some sort of waffle-cone-y notes, as well as sugarcane and rum.
A really interesting session overall.

It’s really fun reading your thoughts on teas I sent you!

I’m enjoying them! Just letting a couple of them rest for another week or two. I probably should have waited on this guy too but i was just too impatient

Hahaha enabling is the best! If you ever develop a taste for younger sheng I’d be happy to send over a bunch of little gifties!

(you = brutusk. I mean, I’d be thrilled to send gifties to you=mrmopar too but I get the sense you know more, have tasted more, own more, understand more, &c, than me :)

From the start it shows a very thick, deep creamy texture plus a sweet brown sugary liquor.You feel an instant tingling within your whole front teeth.Taste and scent-wise there is a nice wet storage basement stony moss composition to it.Between its mouth watering woodsy Autumn notes there is also a mysterious bouquet of something fruity sweet noticeable.

Imagine a little story with this aged fellow like a spiritual pilgrimage through a deep from rain soaked Autumn wood.While you literally can taste and feel the fresh rain dripping down from those reddish brown colored treetops.You can hear wood cracking near and far and feel a fine breeze of wind cooling your cheeks.Along your way of withering with mushrooms covered wood, moss, fresh springs and fallen leaves you finally find shelter inside an abandoned old wooden temple before the rain started pouring down with all its natural power.While listening to the sound of the rain playing its mystical music on top of the roof you can smell the old wood of this temple getting soaked up.You might also discover an old library filled with ancient parchments and scrips.This was quite the image I got.

Now let’s get back to the fruity aspect. The first thing that came into my mind was a gentle tiny hint of an old ripe pickled cherry note within a fusion of pear skin.The major sweetness of this aged sheng definitely shines through its dark sugary aspects.There is also a subtle vegetable note of a tomato nuance but more of green salad especially red chard plus a nice fresh taste of whole grain bread.Talking about the tart aspect it reminds me also a tiny bit of grapefruit.Imagine it all as a nice fusion where all those aspects complement each other and bring a unique united flavor to its perfection.Definitely a very inspirational and relaxing long lasting Pu!