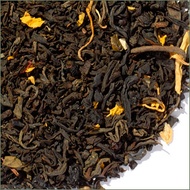 From The Tea Table

About The Tea Table View company

One of the nice things about The Tea Table is that you get 3 free samples with any order, no matter the size, and you can pick from any of their teas. So I placed a teeny order, just for 4 teas in a 1-ounce size, but got a bunch of samples too! This was one of them, since I’ve discovered that I love berry teas.

This is an okay tea. I don’t think it’s anything special, a mildly smooth black base with a pretty generic “berry” taste. It doesn’t really say WHAT kind of berry it is, and I don’t think I could place it. It’s not tart like raspberry or cranberry, sweet like strawberry, rich like blackberry or currant, or with that signature juiciness from blueberries. It’s like… the lowest common denominator berry flavor. It’s definitely berry, but it’s a bit muddled—especially since I had to add cream as the base brewed up a tad bitter. I do have a few cups of it left (they’re pretty generously sized for free samples!) so I might try this iced, I have a feeling that I’d like it a whole lot better.

EDIT: Gave this tea another shot with a short 4-hour cold brew using my once-steeped leaves, and served it with a slice of lemon. Wow, what a difference! The weird “mixed berry” taste has faded significantly, leaving a more distinct flavor: raspberry! There’s also something else fruity, and it’s pretty clearly apricot to me. So it’s like an apricot raspberry blend now! The lemon also helps subdue the artificial taste, leaving a crisp and sparking iced tea. It’s almost hard to believe these are the same leaves I used before: for the rest of my sample I’ll definitely give them a good rinse to get out some of the flavoring and then cold brew it. I’d give the hot tea a 72 and the cold an 85, so I’ll bump the rating to meet somewhere in the middle.

Top notch. The berries work wonderfully with the black tea creating one of my favorite flavored blacks.