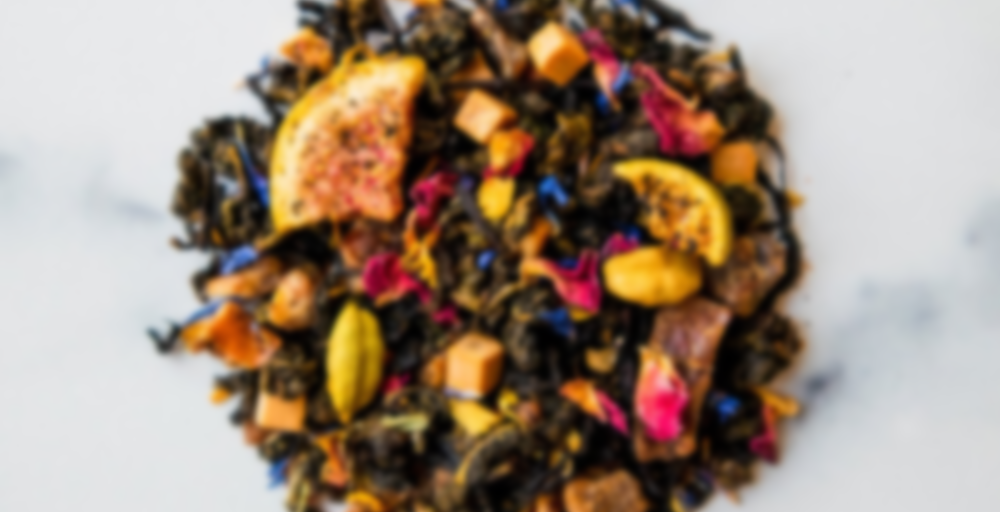 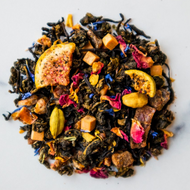 From The Silk Tea Co.

The packaging on this is so pretty. The tea is also quite lovely. It’s syrupy in its sweetness but not super dense, if that makes sense. There’s also a clear fig flavour with a rose top note. The caramel is present but blends into the fig. It’s nice. Not a flavour I would really ever crave but nice.

I completely forgot MadHatter’s review of this and adding it to my wishlist. Maybe because I was trying to be good and not buy tea. But Superanna saw it on my wishlist and got it for me!

Looking at the bag, the first thing it says is “smoky Assam.” I love smoky tea but no one else who was here today does. Still, everyone was willing to give it a try.

First – there was no smoke. Ashman and Superanna said they didn’t get smoke and thought it tasted more like a green base. I would say there was little Assam, and mostly Milky Oolong and fruit. The spoon was full of fruit chunks and cardamom pods when I measured the dry leaf. The steeped tea was yellow, not at all the color I expected in a tea that lists Assam first.

It was absolutely delicious. I tasted caramel first and foremost with fruit right on its heels. Superanna felt it was super fruity. Ashman doesn’t care for anything fig, although he doesn’t detest fig, just doesn’t prefer it as he says. When I asked him how he liked it, he said it was right down his alley, mild, not brisk, and very fruity. We didn’t mention there was fig in it. With the dates, caramel, and cardamom I doubt he really picked out separate fog flavor.

I will really, really enjoy this one, and I agree with Superanna that it will probably also be super iced and will not even require any sweetener.

I was very tempted to try that company out. It’s like half of their blends have oolong, which makes me happy. Was the tea lighter body overall, or just balanced enough to be just right?

It was wonderful. I just had it with a friend who said she would have thought it was a white tea base. She must have meant one of the heartier ones likes a Bai Mu Dan or Shou Mei because it certainly isn’t light like silver needle. I do not detect the assam, or smoke, just medium body and rich fruit and caramel aroma and taste.

I absolutely love this tea blend. The hint of smoke is hardly present, and the creamy fig note is heavy on this brew. It’s borderline a “dessert in a cup,” but in the healthy sense. I’m reminded of yogurt with figs. I’ve already sipped on bag of the tea and working on the second.

Fig? Definitely going to look for this one! (So much for not buying any more tea…)

That’s where I’m at too on my tea journey. 2022 is a year of sipdowns. It’s a fantastic tea. I’ve not had a tea I didn’t like from The Silk Tea Co.

Well, whaddaya know? I didn’t remember adding this to my wishlist but I just got it as an early birthday gift!

I think I like this tea even more my second time having it!

The aroma is so fresh and fruity but also really sweet and golden. Reminds me of Werther’s caramels but with a fruity figgy edge to it. The steeped tea is such a perfectly medley of the golden gooey caramel notes, a buttery pastry type element, dewy floral fresh yellow orchard fruits/apples, and fig spread. Complex but well balanced with all these many flavours in sync with each other.

Thanks to Cameron for posting about this brand! I bought the sampler pack as soon as it became available again, and they arrived today! I was most intrigued by this blend- milk oolong, Assam black tea, cardamom, dates, figs, caramel, and roses (amongst a few other things). Quite an ingredient list. The smell upon opening the bag is incredibly strong. It’s soooo sweet smelling, and has an eggnog thing going on with it. I’m getting eggnog in the flavor too. Not really making out any of the individual ingredients, except the caramel. Not getting any of the flavor of the tea, which makes sense, as I can’t see much of it in the dry mix. Definitely need to revisit this one, as I have some mixed feelings.

Ha ha, well I’m glad to encourage new brands around here, even if this wasn’t your favorite! I’m waiting for it to be available individually to order some to try. I will say I haven’t been super happy with her teas so far, but mostly because there are a lot of florals…