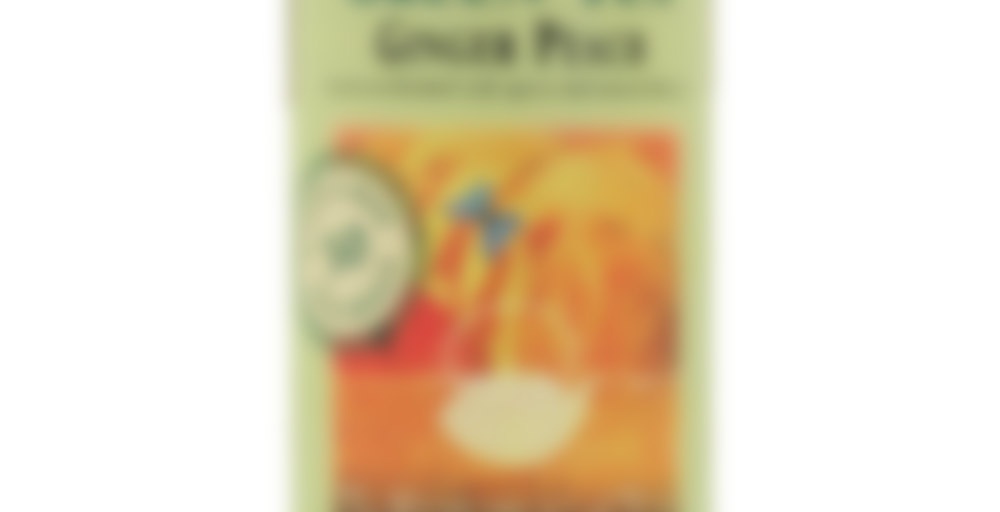 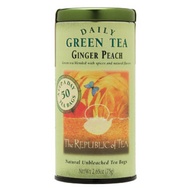 by The Republic of Tea
69
You

This new green tea is a delightful addition to our collection of Daily Green Teas. Offering the lushness of a ripe peach and the tingle of spicy ginger in a fresh green tea base, this flavorful and healthy cup will make the head wiggle with delight.

Our Citizens have enjoyed Ginger Peach Black Tea as their all-time favorite for years and we’re offering this green tea flavor as a New Classic. Enjoy!

Good morning Steepster,
I had a few cups of this yesterday at the office. It’s good as an iced tea and pretty good as a hot tea, though I’ve noticed it tastes better if you add about a tsp. of sugar to it. The base tea looks like a dragonwell or something similar. This is growing on me a bit but is one of those teas I’ll be glad when the sipdown day approaches so I can get rid of it. Working is not as much fun at typing tea notes on Steepster all day – lolol

67, I guess, is get ride of soon:-) I am sipping a dandelion roasted root tea in tea bag from Republic, too. it has a roasted smell, but tastes quite banal. I have a bias against tea bags…does it really make difference?

Once you go loose tea you never go back…. well only occasionally.

I don’t really like tea bags because they make the tea taste like paper, good for traveling or work though

@TeaBrat, you are right…no wonder it smelled like an old bag…how about the fancy nylon satchet ones? I haven’t tried them

IN my opinion the mesh bags are a lot better :)

just googled it. ah, i see, mesh, has holes, lol. cool concept. will see where it sells teas in mesh bags, good for office.

This was my free sample that came with my latest Republic of Tea catalog. The aroma is interesting… it smells like artificial peaches and… chlorine? I find that any artificial fruit flavor or smell will have a chlorinated edge to it. The steeped tea came to a lovely light orange color.

The first sip is pretty good. I’m not getting very much green tea or ginger, mostly just peach. It doesn’t taste like true peaches, but rather a peach flavored lollipop. It isn’t bad, but if you’re looking for a real peach taste, don’t get this. I’m picking up just the slightest hint of green tea in the aftertaste, so this would be a good tea for people who don’t exactly like green tea. As for the ginger… I can’t find it at all. Darn. Still, this is decent.

Exciting to hear a new catalog is out :) I love getting their samples in the mail!

I realized I was the only tea geek among my coworkers when the Republic Of Tea shipment came in yesterday and I was the only one excited. The restaurant is carrying three new tea flavors and this was one of them. We already have the black tea version, which I’m not really a fan of, but I’m going to review them all anyway. (Blackberry Sage is among the new ones, too, which I’m thrilled about! It’s an old favorite.)

As far as the aroma goes, it smells almost the same as the black Ginger Peach. Like artificial peach candy. I wouldn’t expect that to be different, though. The flavor is pretty much what I imagined it would be. Heavy on the fakey peach, super light on the actual tea. No ginger to speak of whatsoever. This tastes really similar to a peach green tea that Lipton makes. Like the bottled stuff you’d get at a gas station. I mean, it’s not awful, but it’s not what I look for in a cup.

Brewed a half cup then iced it down. Poured it into a blender with one container plain greek yogurt, one sliced peach, 1 tablespoon orange blossom honey, and about 1/2 cup vanilla almond milk to make a rather thin but yummy smoothie. Served in a tall glass with a few cubes of ice.

1) this was a RoT free sample with their catalog
2) yes, I’m on a smoothie/latte kick lately. Can’t seem to drink a plain ol’ cup of tea. I guess it’s the warmer weather. Or the fact that I keep buying almond milk and trying to use it up. It will pass, I will drink and log “real” tea again one day!

I went to my Dad’s house for Thanksgiving this year. His wife, my stepmother, offered me a selection of Republic of Tea teabags. I chose this Ginger Peach green tea. It is a bagged tea, so my expectations weren’t that high to start with.

But honestly, it’s not bad. It’s not fresh, and it has that off taste of non-authentic Americanized bottled green tea. But I’ve had worse. My biggest complaint is that there’s no string!!! How do you steep a teabag with no string?!

It was kind of inconvenient. But not as inconvenient as the cup of tea on the table became. Apparently, it was blocking my boyfriend’s view when we played the Mexican Train Game. So he blamed the tea when he lost. Hahahahaa! [Insert evil maniacal laugh here].

Anyway, back to the tea. I steeped it in almost boiled water for somewhere around 1.5-3 minutes. I’m not very precise without my tea paraphernalia. The liquor was an orange-tinted, dirty brown color. It smelled and tasted mostly of peach. Not much ginger, which is a good thing. The ginger stayed subtle and paired well with the tea base.

It’s not the best example of green tea, but it’ll get you through the day. If it were on Netflix, I’d give it 3 stars.

I got this as a sample with the Republic of Tea catalog this month.

I am not finding the peach in the taste, only the smell.

It’s an OK green, I don’t really love greens anyway. I don’t plan to buy it.

Backlogging I had this on tues. I got this as a free sample in a teabag. This smells like peach and abit of ginger. I steeped it up and now can smell the ginger more and the green tea. This has a medium peach taste with abit of ginger and a pleasant green tea. I think this is pretty good.

Just had a cup from Pandera Breads and enjoyed very much except it smelled wonderful so I took a big sip and burned most the skin off the tip of my tongue Ouch! I agree with the other reviews it smells peachy and taste peachy but the more you start to drink the more you realize it’s a green tea. Nice tea!

I’m in search of a ginger peach green tea, thanks for posting! If only it was loose.

Cofftea, it is so funny you should say that I was just researching the Numi chocolate that I know you love and I was thinking the same thing if only it were loose!!!!!!!!!!!!LOL

I got this in the Republic of Tea catalogue. It was very yummy. It smelled nice and peachy. I made it hot but then added ice and it made a very nice iced tea. The peach flavor really shined and I love subtle fruity iced teas. Especially with white or green bases. I would definitely consider buying this.

This was actually the very first tea I ever purchased. I had recently added this to my shopping list and today in the mail was this sample! The tea bag smells wonderful. The brew is light and refreshing. I am not a big green tea fan, but this is doable for me. I always tend to gravitate to ginger and peach flavor profiles. I like it:)