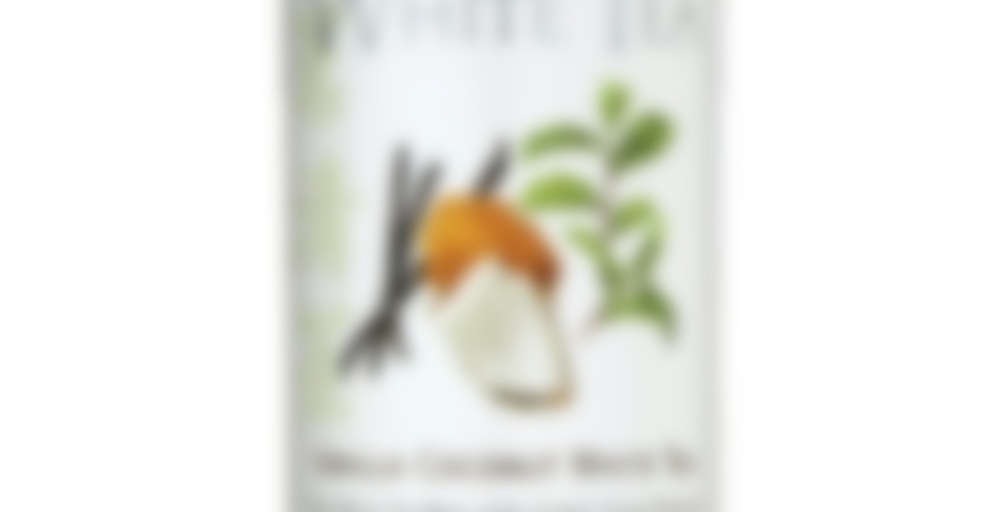 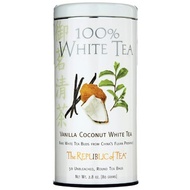 by The Republic of Tea
64
You

Vanilla beans have been treasured for centuries for their intoxicating, floral bouquet and natural sweetness. Combined with the Kingdom coconut, which is located along the seaside of Wenchang, China, they are the inspiration for this fragrant, flavorful and rare White Tea. (Also known as item 40067 via catalogue)

Not all White Teas are created equal! The Republic of Tea has procured this season’s harvest to offer 100% White Tea in our signature round, unbleached tea bags. No other variety of tea or leaves are included. Once reserved for the cups of emperors and nobility we are honored to offer you this pure, delicate brew with its subtle, sweet, lingering finish. Serve warm or over ice.

I tend to steep white tea longer than most…5 minutes give or take a half.
I was a little afraid of this, it ended up getting pushed to the back of my cupboard.
My first sip was reminiscent of my coffee drinking days. The initial taste was familiar—vanilla soy latte. The after taste is definitely coconut.
I’m on the fence.

In the tin, this smelled delicious… until I realized there was a scent of something like bananas, and I started to try to break it down. I resorted to the ingredients list, which showed “vanilla and coconut flavor”. Which, of course, means almost anything but actual vanilla or coconut.

Steeping, it did smell enticing, but when it was ready to drink it seemed like nothing more than hot water. Reminiscent of banana.

Reading the 1st tasting note, I wonder if I used water that was a little too hot. More likely, this tea is just too delicate for my palate, which tends to prefer really tasty spicy chais.

I’ll keep it in my cupboard, but will be happy to send a sample (it’s in bags) to anyone who’d like to give it a try despite my experience…

Be careful with steeping this one – not too hot of water, and fast steep (45 seconds or so).
Smell is a good mix of coconut and vanilla. It’s relatively strong smelling from the tin. The taste is white tea and coconut. With all of these tasting notes I’ve done, I’m noticing a trend with The Republic of Tea: not much vanilla taste to be had in their teas that have vanilla (so far from the ones I’ve tried). The vanilla smell is pretty but for some reason I can’t taste it. Since vanilla is listed in the title before coconut, I would have thought that vanilla would be the main flavour. It’s not a bad tea though, just a “like”, not a “love”.

Despite the fact that I have a lot of ROT canisters that I badly need to sip down, I bought 2 more when I was at Whole Foods 2 weeks ago.

Obviously this is one of them.

I am not a huge coconut fan, but I have a mild like for them and have really gotten into putting lime juice in with it. (Though this seems to work better with colder teas.) This time around I put in some salt as well, meh that made it taste weird. (Sometimes it works, other times…not so much.) I think I also put to much lime juice.

Despite both of those though, I am enjoying my cup.

I do wish however….that ROT wasn’t quite so expensive. Though at least they are alittle bit more accessible (At the moment. Where I’m moving this summer, the nearest tea places at all are in Ann Arbor, which about half hour-45 min from where I will be living. Though bonus is that I’ll be nearer to The British Pantry in Tecumseh.)

If your obsessed with coconut, then this tea is worth a try.

Would I buy this again? It depends on how it does as a iced tea.

Groans Argh. I should of known someone was gonna mention that!

Don’t worry, I have aROT of canisters too! I have 2 full shelves of them…and I keep sharing them too! I find their tea bags go a long way.

A half hour isn’t too bad! That’s my drive to work everyday. If you find any cool tea places in MI, please share! I don’t even know where to start looking, lol

Hello Kiki-Crazy Wisdom’s Bookstore/teahouse in Ann Arbor is really cool, especially if you like New Age/Alternate Religions, funky jewelry, etc. Plus the tea house on the 2nd floor is really nice, homey atmosphere the staff is pretty accomadating. Tranquilitea in Plymouth is really nice though they do not serve the tea. Their prices are reasonable (Like about averagely 3.50 an ounce.) British Pantry like I mentioned above is pretty cool, though only been there once so far. Umm…There are a few other tea spots in Ann Arbor but I have not been to them yet, like Tea Haus. If you get down to Royal Oak there is also Goldfish Tea (on 4th street.) They specialize in Chinese teas. They serve and sell their teas as well as a nice selection of tea accessories. 2 Japanese Grocery stores (that are owned by the same company.) Noble Fish in Clawson and One World Market in Novi has reasonably priced tea accessories and bonus if you like Japanese food stuffs. Both stores also have Sushi bars, but make sure to find out about hours before going, as they can be kind of limited…and look up reviews of both on YELP.

Bought it, thinking I would like it – no LOVE it, as I love all things coconut… It was kind of like flavored (almost) hot water.
Gave it away.
Still seeking a yummy coconut tea.

Not bad, for what it is. The tea is nice and smooth, though as others have said, the vanilla isn’t extra strong. I may try it again with a little vanilla extract added. It gets pretty bitter in left in for a long time, though!

Weak.. would probably be good if it had more flavor to it. Won’t buy it again but might finish the box.