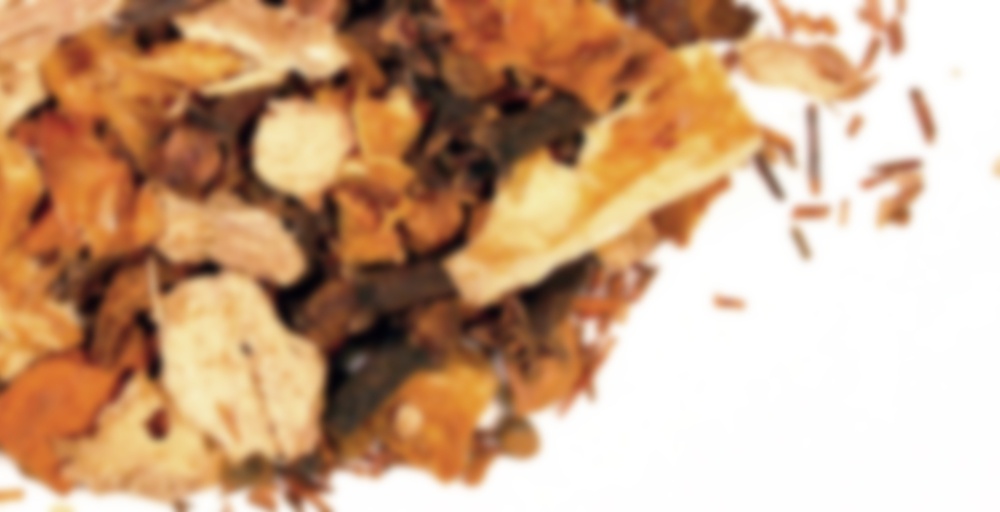 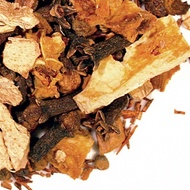 by The Persimmon Tree Tea Company
83
You

A delightful blend of masala chai spices, red rooibos and a hint of vanilla. Great with milk and/or sugar, and naturally caffeine free for an anytime treat.
Origin

I do really like this one and needed a quick spicy cuppa with a little bit of something else before drinking my upcoming several teas! See previous notes! Stay Tuned for many more reviews. Treat this as an intermission of sorts! LOL :)

Got a sample of this in my last order:
I used to LOVE chai – always what I would order at a coffee or tea place. Then I lost interest because of all the other wonderful options in tea. Its been a long time since I have indulged in a chai and this was a wonderful way to come back to the goodness!
Autumn is my favorite season and while it is summer here now I just amped up the air con and pretended I was mid October! :)
The flavors are very well balanced and I added a little vanilla coffee mate which the tea took to very well. Oh oh I think I have some whipped cream in the fridge!
I love that this chai can handle additives but even on its own it is delicious!

Ok – last review of the night! The morning was too chaotic to really enjoy any teas, and it’s only the last 2 hours of the night after TK is sleeping that I really get anything done.

I packed up 4 boxes though, so I get this as a reward before bed!

As soon as I poured it into my cup I was blown away by the rooibos smell. I’ve never noticed that before! But I could also smell the vanilla and the chai.

This is actually a pretty good non-caffeinated tea. It’s not as dark as a black blend would have been, but the vanilla makes it a tad creamy in my mind. I bet this would make a nice latte too. I’d recommend this to someone who wanted soemthing spicy in the evening! I think this is my favourite of the Persimmon samples I’ve had so far!

Also, I know non-caffeinated might not be a real word, but it makes more sense to me than decaffeinated ‘cause that implies it HAD caffeine. Anyway… that’s why I did that. :D

And now I’ve stared at the word “caffeine” long enough that it no longer looks like a recognizable word. I’m going to bed pretty quick.

Tonight I blended this with Russian Caravan black tea from Capital Teas, because when I had the chai alone last night there was no tea flavor to accompany the masala spices. The blend was a HUGE improvement.

I used 1 heaping tablespoon of Rooibos Vanilla Chai and about half to three-quarters of a tablespoon of Russian Caravan. (And like last night, I made it with a bit of rock sugar and half-and-half.) The resulting drink had a much fuller-bodied flavor than the chai produces alone. Very tasty! I will definitely be doing this again (perhaps experimenting with other blends).

With a splash of milk, this really does taste very much like black tea chai, smooth, warmly spiced, and rich. I love that the spices aren’t wimpy. The tea also looks beautiful with some milk; I’ve heard it said sometimes you can tell a tea blend is decent by how it looks brewed with milk—some stuff takes on a dirty dishwasher, washed out streaky grey appearance while better blended teas stay smooth and might turn opaque. This does the latter, turning a pretty opaque taupe with some shell-peach undertones.

I don’t smell or taste the rooibos at all—pretty impressive, on the level of H&S Vanilla Comoro at coming off like a decent version of its standard black counterpart. Until I find better (if I ever do) this will definitely be my late night go-to chai fix. Yummy.

My favorite tea from the Persimmon Tree – its perfect for a cold morning and likely to be in my tea glass all day- must have it!

Read more of our Persimmon Tree Reviews at http://techtea.tv

I steeped this tea twice to see what would happen, and I must say both times were quite good.

The first steep (5min) was a well-balanced chai with the spices all being distinguishable. Oddly enough, the one thing I couldn’t really taste was the rooibos, which seems to have been lost among the spices. With a small dash of milk this blend is particularly delicious.

The second steep (7min) was still quite good, though the ginger seemed to dominate making it a spicier cup on the whole. Still delicious; makes me glad I have 7oz. of this to go through!

Needed some sort of caffeine-free fix tonight, and none of my sweet rooibos teas sounded appealing, so a spicy chai it is!
Ahh this one is lovely! Taken from the Marco Polo TTB

Great balance of spice, and a touch of sugar to pull the flavours out brought it all together :) The liquor is such a deep red, and it’s nice! Definitely doesn’t have that full black chai flavour, but this rooibos chai seems to do the trick. Hmm.. I don’t seem to taste the vanilla though. Just the rooibos and chai.

Chai – kind of never been a fan in the past. Rooibos – another hit and miss with me.

Last month I had The Persimmon Tree’s Masala Chai and was impressed. So I decided to try this one. This one seemed much stronger spiced to me. The ginger packs some heat. On the bright side the vanilla knocks the harsh edge off the rooibos.

Once milk and Splenda are added this became a warm cup of yum. The spices kind of mingled and washed past the tongue. It felt thick and creamy. Didn’t really notice the rooibos at this point. My only complaint is the ginger was a little intense but it is important to note I am not a ginger enthusiast.

This would be excellent sitting around an evening fire in the cool night air.

A nice, caffeine free chai. I like the way the nutty flavors of the rooibos meld with the other flavors – it tastes a bit like a spiced cookie in a teacup. YUM!

A strong, zesty flavor. I like that the spices are not too understated. The vanilla softens the edge a little. The orange brightens the cup. It’s really a tasty combination of flavors.