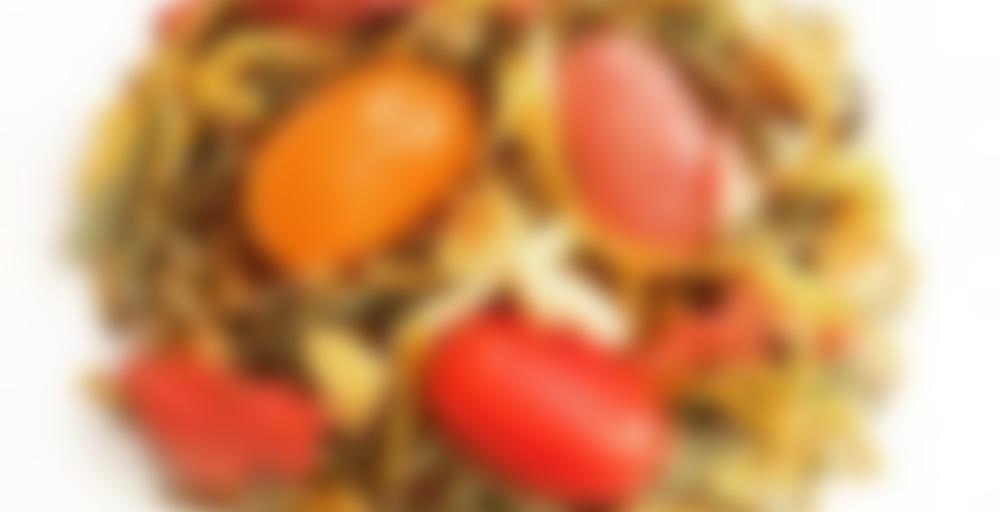 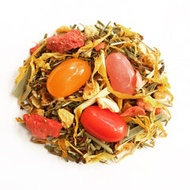 Jump into Spring with this fruity blend of cherry, strawberry and orange. The sweet taste of classic jelly beans will bring back some childhood memories and the real jelly beans we added will bring out the kid in you!

A free sample from my last order…

I’ve had teas with jellybeans in them before, and haven’t really been a fan despite actually loving jelly beans a lot. It’s hard to capture the distinct “flavours” of jellybeans though, aside from the really artisan/gourmet ones like Jelly Belly does, and so most of the time Jelly Bean teas kind of feel generically fruity which is just sort… meh.

When I think of what a “a jelly bean is” in a more general sense, what comes to mind is the bordering on flourescent ones that were kind of brandless that we always got around Easter. They came in green, orange, pink, yellow, white, and red colours and had a THICK sugar coating that was both kind of hard/tough but also a little waxy and crumble-y. Though you could probably describe them all as pretty much just sweet/sugary, they definitely had distinct flavours underneath that layer of intense sweetness. The white ones were the worst – to this day I have no clue what they were supposed to taste like, but they were garbage. The best ones were the red and the pink, which I think were probably cherry and strawberry respectively?? That’s kind of a lie – the best jelly beans are actually the black licorice ones, but I know I’m a SUPER big outlier in that opinion, and even I can admit that only a psychopath would include the black ones in a pack of Easter jelly beans, which are CLEARLY intended for children.

Those jelly beans were always great for the first three or four, but any more after that and the intensity of sugar and artificial fruit flavouring would kind of leave your mouth feeling numb and tingly. For better or worse, I think this tea actually eerily captures that nostalgic childhood experience and texture – the flavour is super sweet and artificial strawberry (just like the pink beans!), complete with the weird bordering on waxy quality that just coats your entire mouth in a thick film. It’s not exactly pleasant, though it’s not unpleasant either – and the first half a mug feels deeply good and nostalgic, especially if you like sweet teas like myself. The second half? Has the same numbing, intense artificial fruit thing going for it.

White jelly beans are usually pineapple for me? Though it always depends on the brand I guess…

Ros, you ever had Finnish salted black licorice?

Or is it Swedish. The Dutch stuff isn’t as tasty to me.

It is Finnish derk! Or it should be!

@derk, I have actually! I really thought that I would love it, given that I typically love basically anything black licorice flavoured, but my distaste for salty snacks outweighed my love of black licorice.

Black Licorice jelly beans are my favorite, too. I have a special memory of one of my late grandfathers, who used to buy bags of black licorice jelly beans, all black licorice, some generic brand, as a snack for himself that “the grandkids wouldn’t touch” to hide in the pocket of his reclining armchair. Except… I always stole them all, hahaha! (Always one weirdo grandkid…)