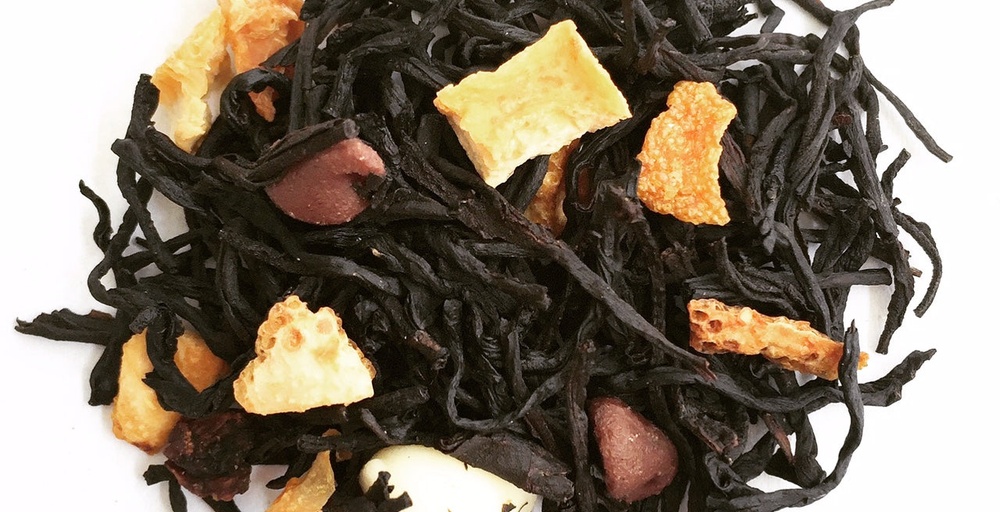 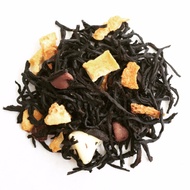 The orange flavor is quite strong, tart, and authentic. I really don’t taste much chocolate. Milk and sugar definitely help smooth this blend out. I enjoy it most cold. I wish I tasted more chocolate, but I’m still having a decent time with this TTB tea! The orange does taste like the orange you would find on the inside of an orange truffle.

This is a sample sent by vallhallow and I’m so happy they sent it over. I’ve been trying to find the perfect chocolate orange tea for a while and this might be it! It has the Terry’s Chocolate Orange distinct flavor and scent and kind of just tastes like someone melted one down. Looks like I may have to place my first Necessiteas order once this is gone!

I had a delightful cup of this yesterday that I sipped on for hours. Today I’m resteeping those leaves and the cup isn’t as nice. There is a sharper edge to it that I dislike. Something that I bet cream would even out, but my preferred creamer has been out of stock for a while, so I’ll continue to mindlessly sip through this cup.
I like this tea enough that I tried to order more right after getting an email about a site restock, but two of the teas that were in my basket were sold out from under me while I shopped for an add on tea. I’m new to this company and a little put off that it seems so competitive to purchase her tea and that it appears to only be an in her spare time kind of business and not one that is being taken seriously. I worry about getting hooked on a company that is inconsistent and frustrating to order from. :/ Have others had similar experiences with Necessiteas?

I know that any time I’ve browsed the site, everything but maybe three items have been sold out, and I’ve heard likewise stories about Hunger Games wars to get items the second they release and them disappearing from order carts. I, for one, am not into that as a shopping experience and moved on from the thought/desire of ever trying them out.

I mean…. I’ll shank someone for a good cup of tea if I /have/ to, but it really doesn’t set the mood I’m looking for when enjoying a cup. Shanking is more of a whiskey mood thing IMHO. :P
I’m with you on the maybe it’s better to move on thing.

You are DEFINITELY not alone – VariaTEA, Sil, and I all had an incredibly frustrating experience trying to order during her last big restock. She didn’t add all the new teas at once, but rather staggered them as uploads to her website. We actually, as a group, noticed that they were being uploaded to the site BEFORE the announcement was made on IG/via email – but in the time waiting for the rest of what I wanted to order (waiting on two teas during the staggered launch) from when she started adding to the site, more than half my cart (about six teas) sold out! I was super pissed, and ended up just not ordering.

It was the last restock that I tried to make a purchase as well! I too didn’t buy anything and was upset about the issue. I was on the site within 20m of the email announcement too. It’s so disappointing that the business is being run this way. I’ve seen features that give you a certain amount of time to shop and a warning of when your time is up, which would have been nice. I don’t get why she isn’t blending bigger batches if she has this much demand. It leaves a lot of money on the table. Makes me want to blend my own tea to avoid the frustration.

love.this. Seriously just need a kilo of this or something…i dunno. Once the borders open up again i may just need to see if i can get a vat of this blended for just MEEEEEEEEEE

Really making a case for this one!

a vat of tea. hahaha

This makes me think of Butiki’s Two Friends!

The other day I had a really weird sausage that could only be described as a sausage made by the Terry’s Chocolate Orange company if they decided to give up on chocolate and refocus their efforts to sausages. Basically, the sausage had a lot of orange flavor, but not just any orange, that very distinctive orange flavor in a Terry’s Chocolate Orange. It was not bad but it was weird and then it got me thinking about those chocolate oranges which brought this tea to mind.

This tea, like most other Necessiteas blends, is spot on for that flavor. It is much better hot but the flavor continues through even as it cools. I just personally think flavorwise it lends itself to a hot tea much better.