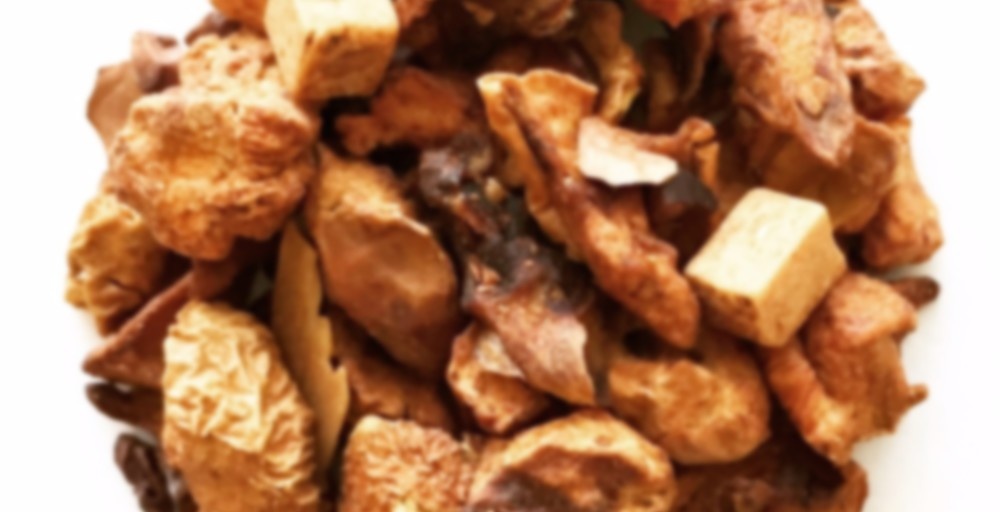 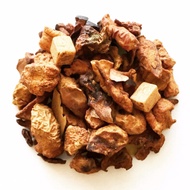 This blend is seriously addicting, over the top yummy and double-delicious. It’s quite amazing and tastes just like a Reese’s Peanut Butter Cup! To sweeten the deal, this chocolate peanut butter bliss is completely guilt-free!

This one was a little disappointing because it mostly tasted like apples, but sort of sour and not great apples. With milk and sugar, I could almost imagine the peanut butter, but it was a bit of a stretch. I did a long second steep, which actually tasted better than the first and closer to what it’s supposed to be. Cold was definitely better than warm as well. I prefer DavidsTea’s take on this flavor profile. But thanks to amandastory516 for letting me try it!

2021 Sipdown #63:
This sample was kindly sent by AmandaStory
I like this one! I remember buying the DavidsTea Peanut Butter Cup tea years ago and being a little disappointed. That one was nuttier even with sweetener added. This one actually is sweet enough and dessert-like on its own that it does remind me of a peanut butter cup with or without milk. I am currently out of tea compatible milk so this particular cup I am drinking plain. The apple in this tea works really well.

I read several tasting notes mentioning how nice this was as a latte and I intended to do that, then forgot as I was steeping. Next time. As it is, it’s a nice cup! The sip is a little light with some peanut notes and then the chocolate peanut butter notes come out in the finish. Enjoying this as I watch bits of The Princess Bride with the tiny roommates.

Thanks for the sample, AmandaStory!

I love it too! I noticed last night that it doesn’t age as well as I hoped for children. There are a few things that need calling out for the sake of tiny roommates, but not enough to not let them watch it multiple times and hope that they pick up all the classic catch phrases!

Making this one as a latte was VariaTEA’s recommendation, so that’s exactly what I did. I’m a fan of the chocolate peanut butter cup tea that DT sells, which is quite similar to this one, so I was excited to see how this would compare. As far as I can tell, the BIG different between these two is that this one has caramel pieces in it? For me, that’s actually a really good selling point – but who knows if they would drastically impact the flavour.

I think the ultimate answer is that this does make for a REALLY tasty latte, but not one that’s massively different from the DT version. It’s perhaps a little bit sweeter from the caramel, and it has a super creamy/nutty peanut butter taste that does loosely emulate the filling of a Reese’s Peanut Butter Cup/comparable candy. I don’t think it’s nearly as much chocolate as the DT version!? However it’s hard to say without a direct comparison. Even if that’s true, I’m ok with the trade off for the sweeter/richer nutty components. Yeah; this one was REALLY good and I’m super happy I decided to do it up as a latte because it was the perfect cap to a long shift at work and gave me this really indulgent moment!

mmmmmmm pulled this one out to have as a latte tonight since VariaTEA gave me enough of a sample for that as well. Latte really brings out the peanut butter aspect of this one imo. It’s still not as intense as a reese, but it’s delicious! Even though i wouldn’t want this all the time, it’s an interesting tea and pretty good! thanks VariaTEA!

I made this as a latte the other day using both regular and chocolate milk. Then I thought it would be nice to chop up a peanut butter chocolate bar I had and put it on top. Tbh it was waaaayyy too much. I think this is much better as just a regular latte with plain milk. The tea itself is rich so no need to add more.

It all sounds pretty fab. With or without all the things.

interesting. PB in a tea seems weird. Did you try the other one?

I haven’t yet but will today so we can decide how to proceed.