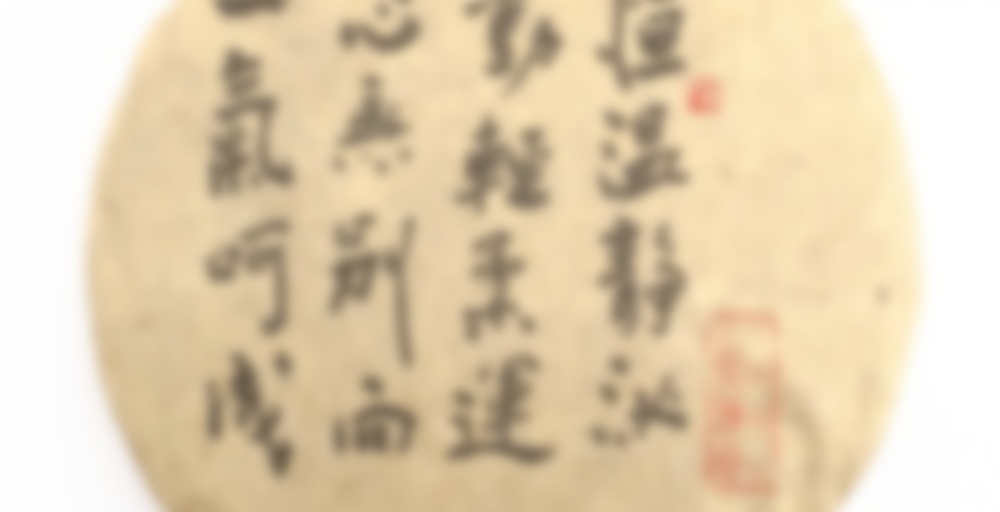 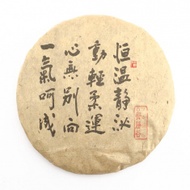 by The Essence of Tea
78
You

From ancient trees in the same village we made tea from last year. A farmer in the village had been storing this maocha since 2007. It has hints of what was once a slight smokey flavour. This has mellowed and transformed into a very pleasant a camphor/plum character in the tea, with the beginnings of a nice aged flavour. It is very thick in the mouth, with a very long aftertaste. This is our bargain of the year I think. Teas like this at this price don’t come around very often.

Heavy, buttery-smooth, slightly woody and with notes of dry plumes.
Images and more at https://puerh.blog/teanotes/2007-qi-sheng-gu-eot

I woke up this morning knowing I needed a serious tea to power me for some cleaning that needed to be done. I grabbed this on because EOF is expensive so I made a dumb association with $ to qi.
This was quite nice. Chest warming and a mild head feel with a taste that mellowed out by steep four; became quite nice but I think that it does need a few more years. The mouth pucker is almost, ALMOST, gone. Probably only 2 years of some storage on this and it will be golden. The only negative aspect to this tea is that it is on the darker spectrum of sheng, to which people will continue to hear me say that I like my light sheng.

Ranting time:
Last night I had some friends over and we were talking about how one of my friends was kicked out of the church because he took a stance that homosexuality is not a sin… as difficult of a conviction that such a thing can be right now with things happening in the US and the church figuring out how to respond, it’s just beating me up. So, anyways, if only it was that simple!
My parents ended up joining us and it’s only around my friends that I discuss such things because I know that they will throw the: ’ I thought we taught you better’ and make me feel as if they ‘failed’ me…
My stance on not understanding psychological and biologic implications to life choices leads me to believe that this whole issue revolving around gay marriage is stupid. The condemnation has now put me in a position were I may not speak to my parents as much because they think that my thoughts are tainted and I’m not sure if I can channel my love for them to see past these negative comments that they spread to the rest of our family. Stupid ass drama that doesn’t need to occur; my thoughts do not change the way in which I act. Whether I think A or B is right or wrong, I’ll always treat people with respect and treat them as I would want to be treated.

Tears are shed as I lose my family because of my own thoughts which now define me…
p.s. that friend who was kicked out was a pastor and it was done via email; for real?

Dude, I know exactly how you feel. I grew up in a Southern Baptist household and my best friend, of 14 years now, is gay. He also used to be an active member of my parents church. In fact, we met at this church (lolz how times change). There were many, many times that I had serious conversations with my parents that inevitably devolved into arguments because my parents were incapable of understanding at it’s root that it’s just not a choice. Eventually, things came to a head when their church pastor spoke out one Sunday around the same time the US was legalizing marriage for the LGBT community and started saying things like, “Real Christians will vote against this.” I don’t like people thinking for me, and I sure as hell am not going to sit and listen to some pastor telling me that the person who has willingly been there for me and been the best friend I could ever ask for was going to Hell, solely for being gay. Fuck you, breh. That’s not what my Christ teaches. So I started looking around and I now consider myself part of the Presbyterian Church of USA (PCUSA, not to be confused with the archaic PCA). Their beliefs are more in line with my own, and they consider spirituality and religion to be a very personal journey, to be defined by free-thinking individuals under the tutelage and guidance of the church who focuses around the ministry of Jesus more than some Old Testament verse that is surrounded by controversy and misinformation, even amongst scholarly circles.

Whew! I didn’t mean to blow you up, I just say that to say, if you wanna talk about it, I’m all ears. I’ve mostly retained my faith through the whole ordeal, but it’s definitely caused me to view differently how I integrate my religion and spirituality into my life. :)

don’t worry Andrew, we love you just the way you are! :D

AS Christ drew the symbol in the sand and asked who among you is without sin? I ask you those who are withut sin cast the first stone. Then said “Those that condemned you are not here. I condemn you not”. As the Bible said “Judge not lest ye be judged”. It is to be judged by God not any of us here on earth.
God made us and loves us for who we are. No matter what. Else fore, why would he have sent his son to save us all. Jesus was asked how much do you love them. He said this much an spread out his arms to be nailed and crucified for us.
He loves us all as we are.

I’m sorry you are going through this, LP. I have been surprised and touched by religious people here treating me with kindness and respect. A friend and I parted ways not too long ago because he was always fast to tell me that my ‘lifestyle’ was an abomination to God. I have been told and have told others that God created us in His image so did not create anyone who is imperfect. Thank you LP and thank you, too, mrmopar for being kind, generous, decent, caring, open minded people.

I wouldn’t give up on them. My long experience with conservative religious people is they are likely to change a stance when confronted with someone they love, given time. The key is an issue that is close to home, not just a hypothetical moral dilemma. When one’s own child is gay, that hits home more than someone else’s child. Look at Dick Cheney, if he can become an advocate for gay rights, nobody is a lost cause.

Christ died for everyone! :) there are far worse things out there. And I’ve been guilty of one of them. But Jesus loves me and died for me. Remember this, if god did not care about you, me or anyone, Christ would never been born. Keep your head up! Enjoy the good things of life that’s what god likes. When we do that and care about others. I care about you.

If you need to talk to me, send me a message

I don’t know you and you don’t know me, but your comment struck a chord in me. As a gay female who is, incidentally, an atheist and someone who cut family ties early in life… well, I’m often dumbstruck by the willful ignorance and disrespect that I see people direct at one other as if doing so were a badge of honor. It’s a wonder that anyone has the unmitigated gall to tell others who & how they should love and to pass such harsh judgments upon their character and worth as people is… wow. Just… wow.

That said, it’s always reassuring when I see people such as yourself who, despite what personal dilemmas may come of it, choose tolerance over bigotry. I can’t speak to reconciling theological morals and family dynamics, but I do hope that open minds and open hearts prevail.

@Teazilla The most important part is keeping dialog and not being exclusive with conversations. Why people won’t discuss comes out to what I find to be ridiculous answers… as if they have the plague or something.

@Kirk Nobody should dismiss someone because of their thoughts. If I acted on my thoughts in a way that harmed someone sure, but meerly just saying I believe this or that shouldn’t be enough to put me in a category of people someone can’t talk to.

@mrmopar exactly… and I had thought that the Golden Rule stretched beyond all people as a simple practice, but I continue to learn it doesn’t :(

@whiteantlers I never let the people speak or act for me which I believe causes some disconnect with religion nowadays. People tend to associate the actions of one for the whole group; it’s understandable, I helped a friend work through prejudices that kept her from religion all together because of a tragedy (sister was raped by a pastor on church grounds). This is the same reason that any type of people get prejudged to do or act a certain way which is wrong. Everyone is different and at the least deserves their chance.

@Cwyn I still have a lot in me, but it’s really hard when your mother gets on the phone with your family to tell them that her son (being me) is going to hell… just not the kind of thing I would like to be said around my family because of my thoughts. It’s really awkward at family events now; especially the time I told my mom I was Baha’i and she believes anyone who is non Christian is atheist so everyone kept saying they were praying I’d find God again…

@Shade I hope people can get past private affairs of one another as well so we can communicate without such anger and disgust. It really takes a lot out of someones day to think about the private life of two people who are attracted to the opposite sex and then bash them; it’s as if you’re missing life that can be lived by following a passion instead of tearing another one apart. I don’t get it… I mean, I tell people oolong is the best type of tea and I believe that but if they say otherwise I say cool and then it’s to the next topic.

@All Every year my beliefs change because I encounter new people and learn new ways to view things. As Kahlil Gibran explains things, you really have to travel around the mountain and not just up and down it to figure out the angles. The coolest part about all of this is how much dialog I have with those who drink tea about these matters or I get to speak to those I never would be able to because of the internet.

Thanks for your thoughts all :)

@lquidproust your right! you’ve been so kind to me and i appreciate that. you are a good fellow and friend :)

@liquidproust ive done terrible things in my life and to have people be friends with me. it’s such a blessing.

Kirk we all have done things we are not proud of. It is a learning experience on this world. The Golden Rule will always apply. It can take some people a while too learn it. I know it did me.