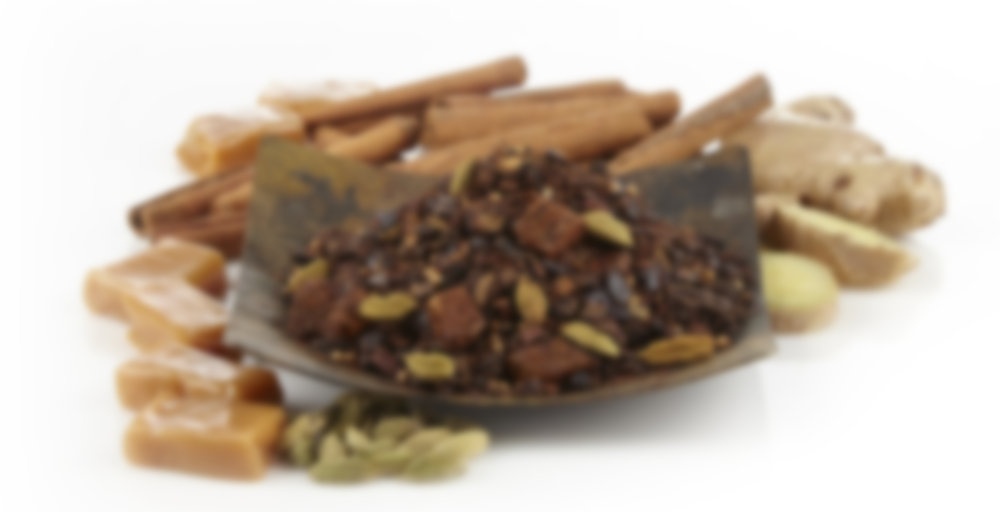 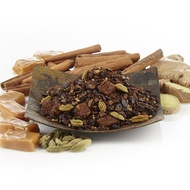 Pamper yourself with the warm, sweet taste of caramelized sugar as it mingles with comforting, traditional Indian spices in this rich and luxe rooibos tea.

Creamy caramel meets sweet cinnamon spice, with a hint of ginger and clove

Preparation / Ingredients
Use 1.5-2 tsp of tea per 8oz of water. Heat water to just at boiling (208 degrees/98 degrees Celsius) and steep for 5-6 minutes. For stronger flavor, use more tea leaves. 2oz of tea equals 25-30 teaspoons.

I almost wonder if I got the right tea in this package! It’s straight from them, and sealed, but wow – no caramel in the slightest! This really tastes like liquid red hot candies to me (which Teavana’s cinnamon flavor often does). I get a little whiff of ginger (and a slightly stronger taste of it), and that’s about it – it’s pretty much one-dimensional. Having said that, I weirdly like it. Not enough to buy more, but my 2 oz will be used up and not passed on to others or discarded.

Oh my goodness! This is some seriously delicious caffeine free chai. Prepared it as a latte and I must say that I am totally impressed. It has a spice kick that I love and the amount of ginger is perfect. The only bad thing is that I only have enough for another latte then it’s game over for this one since I cannot order teas from Teavana in Canada any longer. So sad…oh well, there are plenty other delicious blends to discover.

This is probably better than I expected. It was on sale for 75% off or I would never have bought it. It’s more sweet than spicy with a definite note of apples.

I brewed this one time in a 16oz Teavana Glass Perfect Tea Maker/Gravity Steeper with 3 tsp leaf and boiling water for 5 minutes.

My work tea buddy and I tried this together. Our conversation about its taste made another person laugh at us.

In summary, guys, there’s ginger in this. Possibly too much.
And possibly not enough caramel, or any at all.
And you might prefer it with milk.
Depending on who you are.

This is a totally subjective tea.
This tea might prove that we live in the Matrix.

It is sweet and creamy with caramel. The flavour is fine but for a first steep, this is WEAK.

Edit: used double the amount and is steeps a second time well. But that’s 4 tsp in 10 oz!

This one sounded so good in the store. I was told it was caffeine-free, sweet, creamy, caramel-y goodness with a light spice finish. I liked the sales clerk’s description, and it really did sound like exactly what I’d enjoy on a fall evening. Well… I found it rather blah this evening. Of course, I can’t smell or taste it, so I am with holding my rating until the next time I try it. There just doesn’t seem to be any punch here right now. Hopefully I’ll be able to enjoy it more next time.

I was looking forward to this tea but after purchase I found it tasted like overly sweet cinnamon.

I don’t know if it is just me, but the more recent Chai teas released from Teavana all taste pretty much the same to me. I was excited when the new Chocolate Chai and Caramel Rooibos Chai came out last summer, as I am a huge Chai fan. But after tasting them, they tasted a lot like the Oprah Chai which was released about 4 months earlier. Nothing new here, it seemed. Then, about 9 months later, Teavana releases a new Herbal Oprah Chai that also tastes pretty much like the original, non-herbal Oprah Chai. Considering that Teavana rarely releases new teas as it is (compared to David’s Tea who is always releasing new teas), it is very strange that they keep releasing teas that taste so similar to what they already have on the shelf. I don’t really get it.

This Caramel Chai Rooibos is pretty good for a Teavana chunk o’ food blend (a relative judgment). I find the various flavors to mingle together pleasingly, and there are several—it’s not just a big blast of rooibos and blaring cinnamon, which seems to figure heavily in many of the herbal blends.

I prepared two glasses in a Bodum cylinder using about four times the prescribed amount of dried “stuff”, and I let it steep good and long—maybe 8 minutes? Fortunately it was still hot when I stopped—in fact, right at my threshold “must drink” temperature. I cannot stand lukewarm beverages, so I had to drink the two glasses somewhat rapidly. The reddish-brown liquor was rather sweet, so those candied fruits may have leeched some sugar into the juice. I did not find much in the way of caramel flavor here, to be honest.

I had picked up some of this blend at the chai sale during the fall and am just now getting around to trying it. I probably won’t buy it again (at least not at regular price…), but I’ll enjoy one or two more large servings prepared as this one was—steeped extra strong and extra long.

This might be a good choice for a dieter who wants chai but no caffeine and prefers to skip the cream. I am somewhat curious about how many calories I just consumed… (not usually an issue since I favor pure teas and do not adulterate them). Well, I’m pretty sure that this infusion contained fewer calories than a soda!