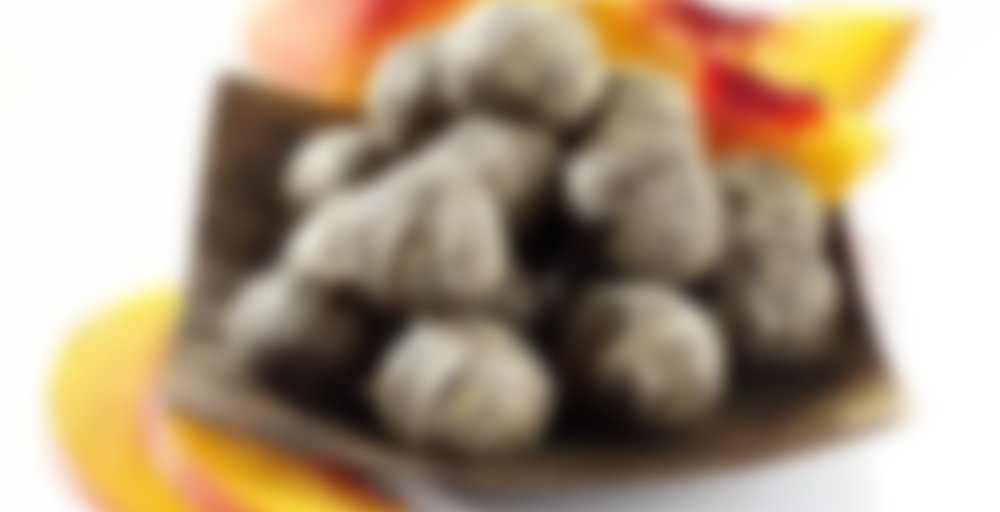 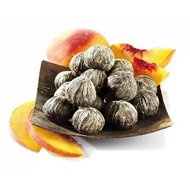 This hand-tied, peach scented artisan tea is composed of delicate white tea leaves and blooms beautifully into a chrysanthemum and jasmine laden bouquet upon steeping. Not only is the tea delicious, it is a wonderful process to watch! Good for multiple infusions.

How to Prepare
Use 1 ball per 8 ounces of water. Heat water to 180 degrees and steep for 3-4 minutes. Ball will bloom as it steeps, so we recommend a glass teapot. 2oz of tea equals 6-8 balls of Peach Momotaro.

A friend is visiting and so I decided to use this opportunity to sip on a pretty blooming tea while we study. This way, I don’t need to drink a whole pot of tea on my own and we have something nice to look at as opposed to just our computer screens and textbooks.

As for the tea, it is actually surprisingly good. I always expect blooming teas to lack in flavor but this has a mellow peach taste atop a smooth white base.

I took my daughter to Raleigh today and we went to the spice shop and two tea shops and….get this….I didn’t buy ANY tea. Don’t clap. I am ashamed because one order came yesterday and three more boxes are on the way so I really couldn’t justify buying any tea. I did, however, buy a Zoku ice pop maker because Tin Roof Teas had a recipe for green tea and fruit Popsicles in their newsletter! :)

I got this at Teavana. I have had it several times there. This is a blooming tea, and as far as I know they do not sweeten this one, though they do sweeten their other samples. The last time I had it, the salesgirl apologized and told me that it was a white blooming tea and really more for looking at than drinking as it had very little flavor. I disagree! It is mild, but far from lacking flavor and interest.

The peach is very fresh tasting and rather subdued, not “in your face”. Today, the salesperson who helped me (hey, I didn’t get pestered this time!) told me there is a strawberry version that she likes even more. I bet I would like that one best, too!

I have looked at those a few times on Teavana’s website!

oooh the Zoku! I covet! Let us know how it works :)

I brewed this one hot, and then iced it. Turned out wonderful. Very light, thirst quenching. I added just a smidge of sugar to sweeten it up, but it was good without sweetener as well. It was almost like drinking a glass of water with a peach slice in it. Mmmmm.

First and foremost, I received this as a gift for my birthday – thanks Madison!

The blooming buds of tea are delicately tied into small bundles. The smell of the dried tea is enchanting – delicate white tea, light floral peach and jasmine scent. I do not have a clear pot for flowering teas, but I do have my large infusing pitcher. Added one ball to the bottom, and gently tipped the hot water down the side so as to not damage the tea. Filled about 10 ounces of hot water, no other additives.

The ball floated to the top, but as it began to unfurl after about a minute, it slowly sank to the bottom. The liquor started to turn a pale green color and the peach and jasmine aromas were released. I allowed it to steep for four minutes. Then gently poured the tea so that I could get another visual infusion.

The flavor is sweet, light, floral, very slight peach, definitely more floral and jasmine. It is not so jasmine or floral so as to have that flower petal taste, but it is gentle and delicately added in such a way that it is delicious without being overwhelming.

I managed a second and third infusion (four and three minutes respectively) with similar results – however, I have to say that the beauty is lost if the tea ball is jostled too much, there is a seed packet or twist of seeds inside the center of the flower that is actually quite unsettling, (I will not unsettle you with such details) but if you do not shake the bloom too much, there should not be an issue.

I have a ton of this because my older brother is generous and was thanking me for using my phone upgrade to get his new iPhone. I do smile at the thought of him going into Teavana and tasting stuff to pick one out for me!

What I didn’t tell him was that I don’t really care for peach or white tea! It’s not bad tea though, and the bloom is pretty. Light taste, but smells very peachy, not real peachy, candy peachy. I’m drinking it for the looks. I might try this iced in the summer. I’m trying to keep an open mind on the white teas.

I know, weird right? I can send you some if you like.

That’d be WONDERFUL! But since you got it from your brother, please ask if it’s ok if you share.

My brother doesn’t care. Send me your addy and I’ll pop some in the mailbox for you!

White tea is so dadgum good. Peaches are as well. Those facts mixed in with my love for blooming tea easily explains my love for this tea. Thankfully, the lady at Teavana slipped in a few extra balls for good measure. God bless her soul. I told myself that I’d save most of these to share with my girlfriend, but found myself drinking it by myself secretly. It’s that good.

The second half of the giant blooming tea tin that my Mum brought back from the US is filled with this peach-scented white.

See my note on Teavana’s Strawberry Misaki for my feelings about blooming teas in general.

The dry tea smells like peach candy, but not in an offensive way. It’s more delicate than some other fruity scents.

The ball bloomed fully in 4 mins. It was pretty spectacular – I like the ones with long finger-y extensions. Reminds me of an alien. In a pretty way.

The infusion is pale yellow and still has a nice peach aroma.

My first sip… I burned my tongue. Badly. Now, I’m not gonna blame the tea itself for that, but the experience overall has been somewhat tainted now. ;-)

After letting it cool down a bit, like a sensible girl, the tea is pretty weak. Like drinking peach-scented water, because I’m fairy certain that most of what I’m tasting is actually the scent. If I were to plug my nose, it would probably be pretty close to plain old hot water.

Maybe I would let this one steep a while longer the next time to see if I could draw more flavour out of it. I doubt if a second steep would yield anything worth drinking. At the price these little guys go for, I would be pretty disappointed with these results – if I had paid for them myself, that is. As it is, with these being gifts, it’s is a fine experience, but not remarkable.

I probably won’t be looking to re-stock this one when I’ve gotten to the bottom of my tin, but may entertain some folks with a pretty display until then.

The first time I got a chance to visit Teavana, this was the sample I tried. I had never heard of blooming tea before, so seeing the peach flower in a pretty glass vase transfixed me. I remember trying the sample and loving it! It was a small little cup, but it was delicious nonetheless, and I hadn’t gotten around to buying it until now, nearly a couple years later.

When I finally managed to open the packet it came in, the smell was very strong and peachy and pleasant. When I added water, basically everything that the first commenter described, happened. The ball was suspended at the top of my glass for a moment before it began to unfurl and slowly drop to the bottom. The flower is quite lovely, and it’s relaxing to watch it bloom before your eyes. The scent was less powerful at this point, but still peachy and floral.

The taste was just as I remembered it! I’m a little bit biased, in that I LOVE “weak” teas as much as strong teas, so I absolutely loved how it wasn’t the most prominent taste. If you’re full after a large meal or you just don’t want a heavy tea one day, this might be a good tea to sip.

As for steep time, I really don’t have a recommendation (even though I set it at 6min30sec). It does take a while to become a little stronger, but I’m drinking mine from a tea tumbler and I haven’t removed the flower for over 20 minutes. It seems almost impossible for this tea to become bitter (although there were other reviewers with different opinions on this).

Overall, I really like this tea, and although I may not always keep it on hand I may buy it every once in a while to keep for special, relaxing days. :)

Very light and slightly peachy, I love drinking this tea after a meal or if I just want to relax.

Peach Momotaro is a ea that is very close to my heart for several reasons. I am totally in love with anything that has to do peaches, tea, and flowers. So this is a combination of three, and it is TO DIE FOR.

When it blooms, it is absolutely gorgeous, absolute perfection in a cup. The white tea leaves open up to reveal a beautiful marigold. I have never seen a more beautiful blooming tea in my life.

As for the taste, it s refreshing, clean, and very light. The peach flavor is very light and resembles fresh peach. The white tea is not strong at all, so all you really taste is the light peach. I hope you will ll enjoy this tea as much as I do