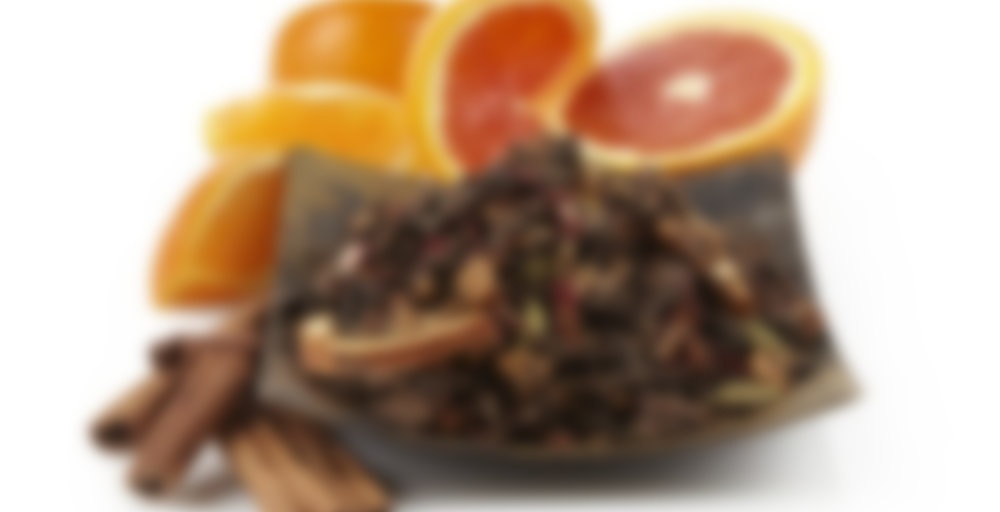 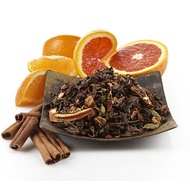 Have you noticed that sometimes a tea will get a whole lot of tasting notes in a few days? Not even a new tea or one in a tea subscription. That is what happened with this one, I saw some notes on it and was suddenly hit by a craving. Thanks to my swap with Marcel Duchamp, which was perfectly timed, I get to try this one!

I love spiced orange teas. Not cinnamon orange, which can quickly become overpowering, but that kind of melded ginger-cinnamon-anise blend that’s not quite chai. This tea smells SO good while it is brewing, rich and wintry and divine.

The orange and spice are definitely strong here! I don’t know if the oolong really stands out at all, maybe it’s a little woodsy but honestly it’s Teavana, I don’t expect the base to shine. I just want a nice orange cinnamon cup!

But, lurking in the background… hibiscus! What. Not in the description at all! I don’t even know why it is here! The orange flavoring is tart enough as is. I think without the hibiscus I would be head over heels in love with this blend but as it is I just like it. Well, actually I really enjoyed my cup! But I’d like it more without the hibiscus. I’ll be cold brewing my leaves though, which I’ve found lessens the hibiscus (especially if they’ve been brewed once already).

Yes, 2nd steeping does hold back on the hibiscus. This is also good cold.

You’re killing me with this one. I haven’t tried it yet because of the cost, but it sounds right up my ally; even with the hibiscus.

I think I will be stocking up on this one during this year’s big sale! It’s a long wait, but I could see myself powering through quite a bit of this next winter.

Tamm, we could always do a small swap if you want to try it. Just PM me.

I loved this one enough to suck up teavana’s prices & buy 50g. I know I’ll need more.

I have to say, I actually really like this one. I didn’t think too much about it before trying it, but chai-like spices and citrus actually work quite well together. I definitely get more blood orange and tangerine out of this than lemon, which can only be a good thing paired with cinnamon and clove. It’s another one that’s both tart and sweet, but this is actually pretty well balanced…especially with the spice coming out more towards the back. I feel like there’s just a wee bit too much citrus at the front, so I’m knocking it down a few points for that. But that’s not a fatal flaw.

It’s got kind of a holiday feel going on for sure; makes me think of stuff like fruit cake and turkey gravy.

I don’t know if it’s going to please all the Teaopia fans who are crushed at Market Spice not making the cut, but…maybe some of them will go for this. I never had Market Spice myself, and I understand it was fairly subtle, so this might be a stronger flavour than some would prefer. Still, I think it’s quite nice.

I see what you did there hahaha

Don’t worry, you’d only have seen it if you caught this discussion:

Basically: Customer makes a mistake. Store is at fault, naturally.

(In The Tea Merchant’s defense, it sounds as though they didn’t know that Teavana prints steeping instructions on their bags. Teavana does enough dumb things that no one gives them the benefit of the doubt anymore, even on little things, it seems…)

I absolutely LOVE this tea! It is my #1 fav right now!!! ahhhhhhh definitely a rejuvenating relief after my Sweet Oolong Revolution was taken away…

Wow. thanks Marcel! This one is so good! I think that I’d like a little more clove in this; but I’m a clove super fan. Wassil is what comes to mind when I drink this one. I’m actually really happy with the orange flavor in this. It has an almost bitter edge that reminds me of orange rind as opposed to straight up orange juice flavor. I think that I will be purchasing some of this one because it is just awesome. If I were to make it again I might have steeped it for longer than the suggested 3 min. Excellent spice and orange flavors without being overly “chai.”
I also turned in my dental calculus paper today!!! Wish me luck!

I’m glad you like this! I get in the mood for this one every so often. It is very yummy.

Yup! Really intense plaque buildup. :) You’d be surprised what we can learn from it. Stuff like where people were getting their water, microfossils, we can tell how they were cooking their food. It’s awesome!

I totally had the wrong idea. Thought you meant math for dentists, haha. Sounds interesting but a bit gross! :P

This would be so much better without the hibiscus! While I long for a strawberry tea of deliciousness, I also long for a mandarin spice oolong and/or black tea.

One day I will find you, tea. One day.

Edit: Oh gods. Had to dump the cup. Moving on. Too much hibiscus AND the cloves are making my tongue numb. Next time, maybe not 3 minutes when I end up with a clove in my basket.

Oh yeah, I could only imagine what a weird sensation that would be. Numbing cloves + drying hibiscus. Ahhh!

It was pretty terrible! I think I rinsed it last time, and did a shorter steep. I should look up my notes, or note better instructions on my tins! :)

I went into Teavana last night to grab a mug for my girls’ teacher & low & behold I walked out without purchasing anything. But somehow left with tea. Opps lol

I somehow noticed flavours I hadn’t before, this being one of them. I have a friend who works there & she threw me enough for a few mugs of it.

I brewed it up this morning, dry & steeped it smells devine. Spicy & Orangey. LOVE!

This is so delcious. May be my fav Teavana tea to date! om nom nom. Must buy more… devilish tea

I am in love. I could spend the rest of my life with this tea. Seriously. This tea is sweet, hot and spicey. Smells and tastes delicious. You can taste the oolong tea, but it is well balanced with the spicey flavour. There is a very slight orange citrus flavour, it is more sweet than tart. The sweet spice is strong but not so strong that is burns your tongue. It also leaves a nice sweetly spiced aftertaste. This would definitely make a great after meal tea. I can imagine it blending well with a fruity tea/herbal. Looking forward to more cups of this and experimenting with blending.

I was served a spiced mandarin a few months ago. It was so good. I thought I would get something like it. That’s been a challenge! Nothing seems just right- too spicy, too much orange, not spicy enough. I just cant find that nice balance. I had called and ask her where she got it – it was a swap and wasn’t properly labled. So I’ll never know, but the hunt continues.

I would love that. Look through my cupboard and see what you would like for swap.

I’m really enjoying this one right now. Sweet, juicy, and mild spice. There is a nice earthy note. Prettysimple :)

I actually had this tea last week, on Friday, but I didn’t feel up to writing a note about it.

I adore orange tasting things, but have yet to find an orange tea that I really like. (Except for Constant Comment.) I think I have a mild like for this tea, but whether I would get another bag of it….only time will tell.
I am feeling kind of annoyed and impatient with summer. I mean I love that it’s warm, but lately it’s been to warm to enjoy my tea hot. I make do with pouring it over ice, and that does somewhat satisfy the craving…but not much emotional satisfaction.
So even though I don’t want to deal with Winter (LOL) I can’t wait til Fall. One of the suggestions for this tea is Maharaja Chai Oolong, which makes sense considering the Spiced Mandarin smells like a chai.

I’ve been hunting for a spiced orange tea for a while after being served some awhile ago. I’ve always been disappointed, even if the tea was good, it just wasn’t quite right. Lala sent me some of this in a swap. This is it!! This is what I’ve been looking for! I’m so excited, this is the best orange tea I’ve had. Nice sweet orange with the perfect blend of spices. Everything works well together. The juicy sweetness of the orange is supported by the spices, not overshadowed by them.

So happy you finally found the tea you have been looking for !!

The steam coming off of this smells a lot like grapefruit zest. It has a nice blood orange color and I like how fresh it tastes. I could see myself grabbing for this when I’m out of juice, which makes me curious as to how it would taste sweetened and chilled! This would be a refreshing tea to keep on hand during the cold and flu season.