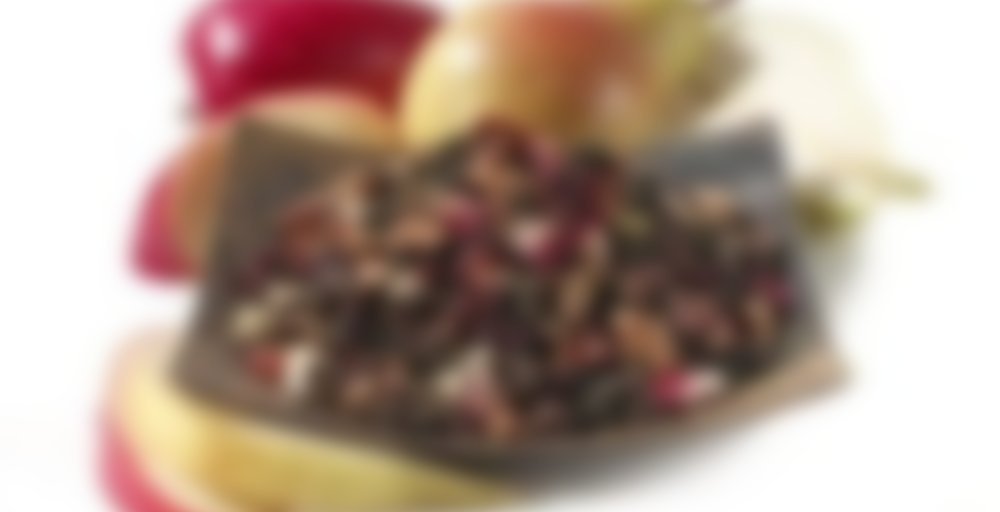 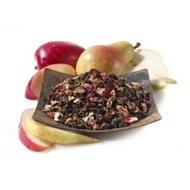 Transport yourself to paradise with each sip of this Oolong featuring succulent pears, crisp apples, sweet papaya and lemon balm. This enchanted Oolong blend is subtle, sweet and fragrant with natural stress relief (lemon balm) in your favorite tea cup.

Nope, cold steeping doesn’t make it all fruity and awesome. More tea to water does it!

BUT this is a great way to bring out the oolong. It’s still really fruity, but it doesn’t scream pear like it did to me the first time.

The oolong being more prominent is really nice though. This tea has a mix of green and dark oolong and I kind of love the way they blend. I’m not a fan of the more oxidized oolongs I’ve had so far, although I really want to like them, so this is kind of easier for me to handle. It’s got those roasty flavors but still tastes vegetal.

I left the leaves in the pitcher since I do like to cold steep oolong as long as possible, so it’ll be interesting to see how this tastes in 6 hours too!

I got a fair amount of this tea in my recent swap with brandy3392… thanks again for the swap! I was interested in it because I like the idea of an anjou pear oolong, and also because I enjoy trying a bunch of Teavana teas without ever having to deal with the company. The dry leaf on this was something I have come to expect from some of these big flavored tea companies (not just Teavana) of a high “inclusions” to tea ratio. What’s also interesting is that the oolong seems to be a mix of dark oolong (short, uncurled leaves and some stems) and green oolong (reasonably well rolled balls).

The steeped tea on this one immediately lets me know that the rosehips and hibiscus are not going to be hiding here. It is a lovely “dusky rose” color. While I do get a pretty obvious tart hibiscus aroma from this, I also definitely smell the slightly vegetal, slightly floral oolong base underneath. Overall, I’d have to say that I like this tea ok, but I don’t think it does what it intends to… or at least what it advertises. It definitely has a super tart, hibiscusy taste at the front of the sip, which fades into a sweetish, fruity flavor toward the end. The hibiscus/rosehips kind of overwhelms the rest of it. I used to see teas with hibiscus in them and think that they’d be fine because I love hibiscus, but really I love it cold and highly sweetened, not in hot teas. I will definitely look forward to making this one iced in a big pitcher when the weather warms up.

Blech to the hibiscus bully!

I wasn’t very impressed with this one either…. I thought it would b a lot more pear-y especially bc it looked like there was a lot more fruit than tea in tea in the bag lol

This is a LONG overdue thank you to Mercuryhime for providing me with this sample (and others) eons ago. I found it in my basket of muddled aromas and thought it might have survived the onslaught of smells. Steeped, the tea smells tart and is a quite pretty coral shade. I am thinking there must be some rosehip or hibiscus based on the smell and colour, but it’s not too in-your-face about it, which is pleasant.

I’ve googled Anjou pears but I am not sure if I’ve had them before. When I look for pear tastes, I expect a sweetness reminiscent of the pear Jelly Bellies and this actually has that, in a way. The reality of this one is that is very tart though, at least for a pear tea. If we take pear out of the equation it is mildly tart, definitely fruity. More of a crisp sour apple than a pear. I’m not picking up on the oolong, but that’s to be expected with all the additives this has.

While it’s got a generic fruit flavour going on, I actually quite like this one. If this were an offering from a store close to me and was relatively cheap (maybe $5 or 6 for 50 grams) I might pick up some more. Generic, yes, but still tasty and the oolong makes it different than if it had a green or black base. This almost tastes like an herbal, it just has a bit of backbone from the oolong.

Having looked up the ingredients on Teavana’s site, I see this has both hibiscus and rosehips. I am impressed that it is such a light touch though – most hibiscus teas are overpowering. Perhaps Mercuryhime balanced it for me. :)

Anyway, this was my first and only Teavana tea. Nothing to write home about, but nothing objectionable besides the price. Thanks again for sharing, it’s much appreciated!!

I completely forgot I sent this to you! Glad it wasn’t objectionable. :)

The name of this makes me want to try it… but I have other pear teas incoming that will hopefully satisfy such cravings!

I got this tea as part of the recent 75% off Teavana sale, it is hard to pass up that good of a sale! I wanted more oolong blends anyways.

So, opening the package – BOOM MEGA CHEMICAL ARTIFICIAL SMELL. Ew. The tea steeped up a cloudy gold orange with lots of white and dark cloudy debris. Steeped up, very pear flavored, like pear fruit juice, with a little green oolong flavor. A little on the sweet side, I’d personally not add any additional sweetener.

Resteeped, not very pear flavor, but oolong and weird tart taste. I wouldn’t resteep this tea next time. I didn’t expect this tea to resteep that well as it’s pretty fruit salad chunk mix.

Hmmm, I both like and dislike this tea. Maybe iced it’ll be much better. I like the pear flavor, but don’t like it’s really artificial of a flavor.

LOL. Your review of this tea is kind of like mine, except alittle more on the like side.

I got some more tea from Teavana to try because I really like the papaya oolong. Sadly I am not a real fan of this. I am starting to feel a little meh about Tevana because they seem to be so hit or miss with me. Now onto this tea- the flavor is weak and instead of pear, the hibiscus and apple flavors predominate. I will probably finish it but add in some more plain oolong to make it better.

This tea was weak and unimpressive. It is definitely not one of their better teas, sp I can see how Teavana can be hit or miss.

Hit or Miss happens with me and every tea company that I’ve tried. I just chalk it up to that’s the way it goes.

I am sad. This is my first first flavored oolong and it was only ok. I think the hibiscus ruined it for me. It seemed overpowering and flavor seemed more apple than pear. Though I must say, the fruit flavor was very natural.
The oolong base was woody and darker than I liked.
I’m glad to have sampled it but I’m not sure about future flavored oolongs.

i’m having the same issue – drat the hibiscus!

I knooow! But the fruit flavors weren’t really up to par either. Not good tea makes me sad. :(

Their papaya oolong is better, this pear thing blows. ;-)

A nice, basic fruity, with a touch of tartness. They could of added just alittle more hibiscus in it though. Not alot…Hmm maybe I’ll see if I can find some fresh hibiscus next time I go shopping.
Being not very experienced with Oolong, I could not tell how much Oolong was present. Would I get this one again? Possibly but not anytime soon…plenty of other teas that I want to try.

We picked some of this up on a shopping trip with my mother. It was an unnecessary gift, but I’m not going to say no to offerings of tea.

This smells almost like sour lollipops when its dry. I love sour lollipops. So I came home and immediately made some of this in my dad’s fancy clay teapot that no one ever uses but me.

Honestly this is good, but I think I’m more in love with the oolong flavor than with the pear flavor. The pear makes it sweet, but the oolong makes it taste good. Its got this subtle, buttery taste to it. I really need to get my hands on some straight oolong.

What a refreshing tea! I love this hot or iced; although lately I opt for hot teas since it’s winter and freezing outside. I love the medley of flavors – fruity pear and apple, flowery hibiscus and rose petals, plus a light touch of the oolong base tea. However, don’t let it steep too long or you’ll be looking at one bitter tea. (I learned this the hard way and hope to save others from that bitterness!) I have to admit this is the first pear tea I’ve ever tried, and while I don’t like the high price of Teavana, I’ll come back for more of this truly tasty pear-adise! :)