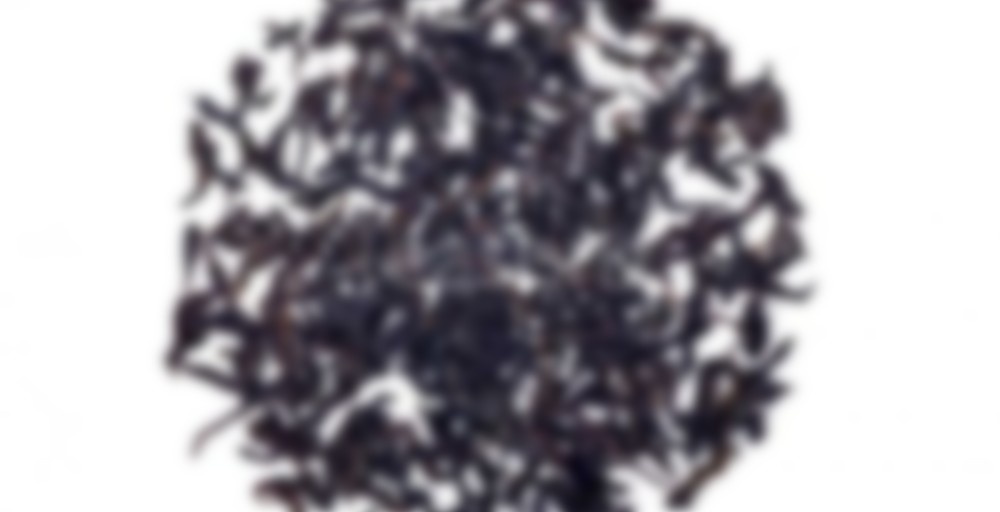 I really adore the whole gamut of Big Red Robe teas, from the sweet ones to the smokey and robust ones.
These twisted black leaves with only a few golden brown ones mixed in attest that this will be one of the roasty ones.

I tried this yesterday with Chocolate Silk Pound Cake, strawberries, and freshly whipped cream. It was fantastic with food, with a nutty flavor like dry walnut skin contrasted with a light underlying sweetness. I didn’t pick up on smoke as much as nuttiness.

Today I had a cup by itself, and was surprised to find that it tastes much smokier on its own, bordering on a mild Lapsang. (This is a Lapsang loving household!) The smoke was really front and center, whereas yesterday walnut predominated.

Both days I noticed a light drying effect which was nice with cake as its clears the palate. I really want to try it iced as well. I think it would be great!

Well first of all it helps to put your review on the correct tea :D. My first review of this tea should be tossed as it was not this tea!

Anyway now down to this tea’s actual review. I found it quite amazing how different the taste is from the dry smell. I also liked how long the twists were. Overall this tea is very similar to houjicha [i think anyway]. And yeah I know I also said that on my wrong review but it’s true! The dry twists have an almost slight raisin smell to them with a somewhat earthy note as well. The prepared tea smells roasty just like houjicha but the taste is a bit more subtle than houjicha. I think i’ll try steeping it longer next time and see how it compared then. Either way, I would recommend this tea to anyone preferring a good roasty flavor probably during/after a meal or specifically in the afternoon. Due to it’s scent and flavor it’s a more savory type of tea. Thanks to Teasenz for this sample!

It is a sad day today, last day of the Dropzone Commander Tournament, and yours truly will not be in it because I lost. Ben (who is the Best General, he got an award for it and everything) is still in, and I would not be at all surprised if he wins, even though I was so hoping to go against him in the finals. Honestly it was not even because I wanted to win the tournament, I just really want a rematch against Ben and his stupid Shaltari! So tonight I will bring my tea and equipment and make people tea if they want it, and maybe pick up a game with one of the other people, and if that does not pan out I can always paint my golden Prowlers to go with my crazy looking golden Annihilator!

Let it be known, when I opened my box of samples from Teasenz and saw they had included their Red Robe Da Hong Pao I did a little squee of joy. I had run out of the good stuff and only had some really low grade (really I think I paid $2 for it at my local International Market, and it is…interesting) and Teasenz has never disappointed me with their teas, so I had high hopes for this one. You all know me, I have a serious weakness for Wuyi Yancha (Rock Oolongs) their rich mineral and char notes ground me, I am not sure if it lines up with Traditional Chinese Medicine, but they seem to have a strong Earth and Wood Cha Qi (why yes, I have been brushing up on my studies lately) to me. Metaphysics aside, this tea smells really good, in fact I will go out on a limb and say this is the sweetest Da Hong Pao I have ever sniffed! There are strong notes of rich cocoa, hovering between dark and milk chocolate, toss in the notes of baking biscuits, moderate notes of slightly fruity pipe tobacco and autumn leaves, and finish off with a blend of char and myrrh. This finish reminds me of the charcoal incense burner and resins I used to use a lifetime ago (ok, it was only 15 years ago, so half of a lifetime!)

Into my Yancha pot the substantial amount of leaves go, I think it was the incredibly valuable resource of TeaDB where I learned the fine art of brewing Yancha traditionally. Lots of leaves, almost boiling water, and super short steeps! I can safely say that brewing Yancha that way was an eye opener, so much so that it was the second tea I dedicated a Yixing pot to. The aroma of the wet leaves is super strong in the cocoa department, leaning toward cocoa butter with its creamy sweetness. There are also floral notes of spicebush (or, I was just recently reminded, the flower Dianthus, they smell almost identical) and orchid. At the finish there is a hint of char and mineral, like wet stone. The liquid is very creamy sweet with notes of honey and cocoa, there is a gentle lingering floral, along with a nice kick of char and mineral at the finish giving the tea a bit of depth.

Yep, this is the sweetest Da Hong Pao I have ever had, there is a dance of honey, milk chocolate, cocoa butter creaminess, and flowers on my tongue at the beginning. That lasts until the midtaste, at the end of the midtaste, but before the finish, a very distinct orchid note for lack of better word blooms in my mouth before moving right along to a robust finish of char and wet rock. The aftertaste is a blend of loam and myrrh, this first steep was a powerhouse of sweetness and those familiar rock notes.

The adventure continues with the second steep, the aroma is still really sweet, though the cocoa and honey notes have a stronger accompaniment of spicebush, char, and wet slate (if you were curious which specific wet rock it is) along with a gentle finish of tobacco and myrrh. This steep is quite intense, though not as sweet as the first. Starting off with strong notes of mineral and char, then moving into a fruity tobacco. After that there is a pleasant explosion of spicebush and honey, the spicebush notes lingering into the aftertaste to be joined by notes of cocoa at the finish.

For the final steep, the aroma is a bit mellowed out, notes of char and mineral with a sweet gentle floral note and a honey finish. This steep really lets the rock part of the name Rock Oolong shine, with notes of wet slate and even a bit of fresh spring water mixing in with rich char and a finish of cocoa. Not a very complex final steep, but a very mineral heavy one, which I enjoy.

For blog and photos: http://ramblingbutterflythoughts.blogspot.com/2015/05/teasenz-red-robe-da-hong-pao-tea-review.html

Lewis & Clark Traveling Teabox – Tea #6
Upon rinsing this one, the scent from the cup kind of made me want to change my mind. I believe I’ve only had one Red Robe years before and it just isn’t my thing, isn’t to my tastes. The scent is charcoal. That’s what I don’t love about it. I can now appreciate subtle notes that weren’t there before my palate has tried hundreds of other teas: a flavor like houjicha, a sweetness, a creaminess, a butteriness that lingers, but mainly it is still first charcoal with a dry texture. It’s kind of nice to know that there are some teas out there not to my taste though!
Steep #1 // 2 tsps. // rinse // 2 min

From the Lewis and Clark TTB.

A pleasant wet-leaf aroma, full of different fruits: berries, kiwi, banana, and peach. The liquor looks like peach juice. Medium-bodied, smooth, crystal clear. A gentle impression. The overall profile is juicy, sweet, and full of fruit with a starfruit note and a hint of floral.

While this da hong pao tastes good and leaves a fluid floating feel, it’s not complex. And I thought it would do well gongfu-style, but I was disappointed that it pooped out so quickly. I should have followed the Western instructions.

This sample was provided for free in exchange for review. You can find this tea here: http://www.teasenz.com/da-hong-pao-oolong-tea#.U_ZTaPldXX8

I’m using the gong fu parameters suggested by boychik for this one. The dry leaves are large and loosely twisted. They look so brittle and fragile! Very dark in color, almost black. Dry scent is autumn leaves but there’s also a honey sweetness and dried fruits. I did a 10s rinse and then 10/10/15/15s steeps. The water was 200 degrees.

The brewed aroma was pretty similar across all steeps – mostly autumn leaves and roastiness with a touch of honey and sometimes fruit. I found that the flavor also didn’t seem to change much, except for one steep which was unexpectedly heavy on the earth and mineral tastes. The overall flavor was fairly roasty with that familiar dry leaf taste along with some sweet and somewhat floral honey notes. I also got some elements that reminded me of white tea – namely grain and hay flavors. There was some dried fruit that poked its head in once in a while, and a nice baked bread and creamy nut (cashew?) aftertaste.

Overall, this seems to be of good quality compared to other similar teas I’ve tried, but I am by no means an expert. I did enjoy the experience, but I think this genre of teas may not be for me. :P

I’m no expert;). At least you didn’t dump the cup

I don’t hate these teas, I just don’t love them either. :P

Maybe you would like Oriental Beauty? They are a notch lighter.

I’m no expert either, but I do know there are a lot of “wuyi teas” out there, that aren’t really from the wuyi mountains. Not saying this isn’t though..I checked their website, good da hong pao teas (big red robe) are usually on the pricy side, wonder how they can afford to sell theirs at only 9.95 for 70g. Maybe it’s just a lower grade?