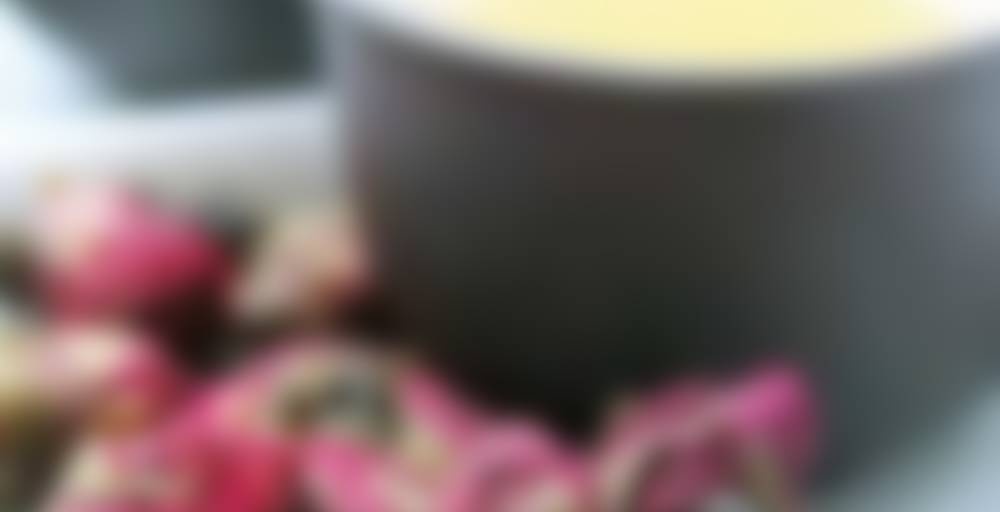 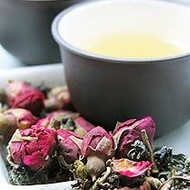 A refreshing yet mellow blend of rose buds, oolong and peppermint.

A graceful cup well suited after meal as oolong helps digestion, peppermint freshens the breath and keeps the flatulence at bay and rose buds encourage your body to relax.

To me a good oolong is one that you never want to stop drinking and that gets better with each new cup. For me a bad oolong is one that satisfies with one cup because really good oolongs taste so much better on the second and third infusion so if you aren’t reaching for your third, fourth and sixth cup then you’re not getting the most out of your tea.

This is a good oolong – this is aptly named and makes for a very satisfying post dinner tea. When I opened the packet for the first time I was very impressed to see distinct oolong leaves, beautiful large read-pink rosebuds and dottings of peppermint. No dust fragments or chopped up leaves. AND THE SMELL – mmm…. very nice rosey hues with little hints of peppermint enticed me to get out my good teapot. I infused the first lot for about 2 and a half minutes and the second time for another minute longer. The leaves when they’re infused expand out massively – they are the largest oolong leaves I have seen so far and are just beautiful to look at.

I love rosebuds – I’ll put them in everything so the domination of the rose is a major plus in my book. The tea smells more of a mixture of rose and peppermint than ‘traditional’ oolong and the initial taste is of a smooth sweet rose with little hint of the peppermint to follow. The after-taste is when the crispness of the rose kicks in along with the peppermint which at first seems quite light but with each subsequent drop dominates a little more each time while keeping the dominate tone squarely on the rose.

The second infusion amps up the more buttery oolong balancing out both the rose and the peppermint and turning into a well rounded sweetly refreshing tea.

There was no grassiness to the tea at all and I agree with the previous reviewer, Luthien, that the first infusion yields a more herbal than oolong taste. I also think this tea is someone how ‘better’ after tea – when had after tea it seems to cap off the eating and provide a nice relaxing way to start the evening. I had my further infusions much latter at night and I kept feeling like I should have eaten first but maybe that’s all in my head!

I would recommend this tea to people who like rose and ‘buttery’ oolongs.

I kept meaning to wait until after a meal to try this one, considering the name, and then I kept forgetting. So finally I just gave up and tried it in the middle of the afternoon.

Weirdly, of all the elements, the rosebuds manage to dominate the flavour – or perhaps I just ended up with a few too many rosebuds in this particular cup. This isn’t a bad thing, particularly, since it did deliver a nice, refreshing cup of tea, but the taste was a lot more herbal than I’d really expected, even allowing for the presence of the peppermint.

I think I need to try this one again and see how it works out using a second lot of leaves.