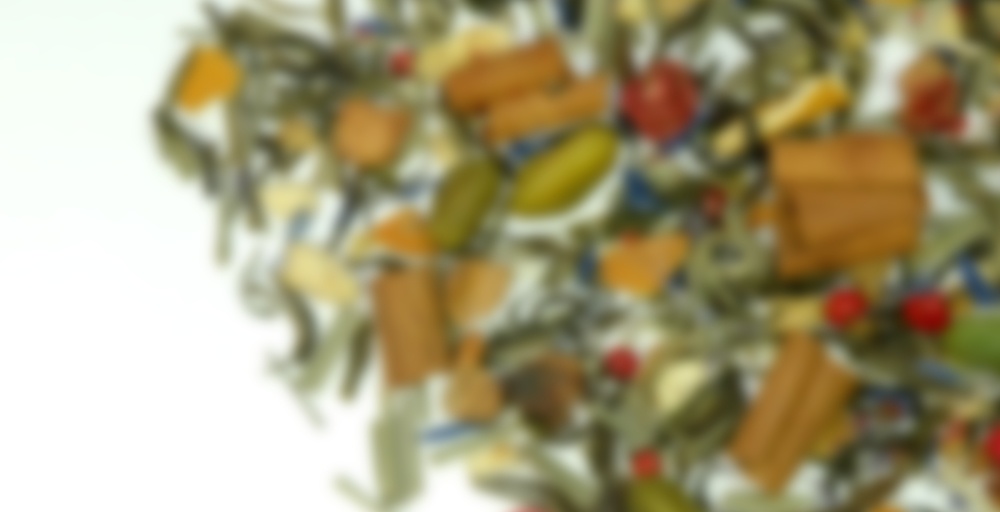 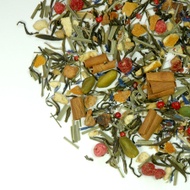 This was an interesting tea, and interesting circumstances in which it was chosen as my tea to go the other day. I don’t know why, but I was having crazy itching at work, and I didn’t know the cause, but I also didn’t want to be knocked out at work from a Benadryl, so I looked for a tea that might offer relief. I asked the SAs, and they weren’t too sure what might help, but suggestions were either rooibos/honeybush, for hydration, or a white tea, for the anti-oxidants. I opted for this one, as it has ginger and I thought it might have a blood cleansing/warming type of effect. I dunno what I was thinking really, but I did stop itching. It might have been the tea, or it might have been the different atmosphere once I went home, or maybe just time.

The taste was interesting. I wish I could say I could pick up the pistachio or the peppercorns, but I mainly tasted the orange and cinnamon, and a little spice from the ginger. No coconut, none of the other flavours. Perhaps they just married the others well, and made a complex taste, but I think really, they were just understated, or underwhelmed.

All in all, it was not a bad tea. Probably not one I’d buy for myself, though I’d drink it if it was given to me.

I love white tea, but it’s so darn finickey. Of course I steeped it a bit too long so it had a slight bitter/dry taste to it. The dry notes are light & wonderful. It’s not too over bearing but smells amazing. Once steeped the tea lost some of it’s flavour, I was mostly getting notes of cinnamon.

This tea smells freaking INCREDIBLE. It’s too bad the flavour gets lost a little in the steeping! The smell is exotic and enticing, and the taste is light and fresh, with the lemongrass and white tea taking over the flavour when it comes time to sipping. The tea is good, I just wish it tasted a little more like it smells.

I agree. Smells great, but I mostly picked up on the orange.

Loved it, but I could not find it any more…

This tea has a wonderful, exotic scent even though it’s been sitting in my cupboard for quite awhile as part of a white tea sampler. The flavour doesn’t seem to have suffered either. It’s an interesting mix of tangy orange and nutty pistachio with hints of spice like cinnamon and touch of fruitiness. It’s very well balanced despite the seemingly odd mix of flavours and I’m really enjoying it.

Not really fond of this one. Having had a cup of each today, I definitely come down firmly on the side of Teaopia’s White Pear, which ought to have been named ‘Wonderful White’ if you ask me. Which no one did.