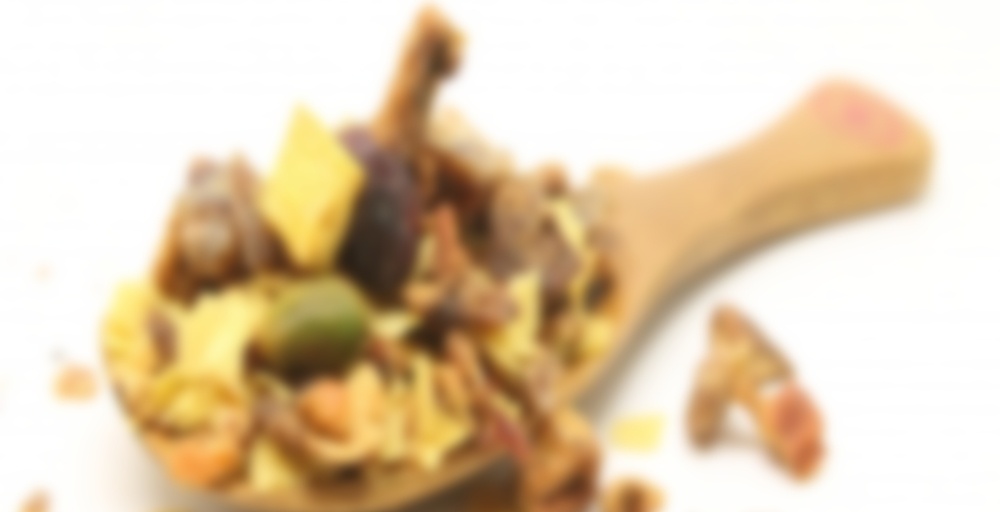 I bought this a WHILE ago, but it is certainly never resulting in CANTALOUPE which is why I have never written a tasting note for it.  Steeped this way, I definitely get two balanced steeps.  I really have to milk that second steep on some fruity blends.  Since this gratefully didn’t have any hibiscus, I can steep the second cup for 45 minutes, no problem.  Of course, it’s cooled by the time I drink it, but it’s fruity!  I have to look at the ingredient list here because the only thing I’m tasting is cherry.  Now that I’m looking at the ingredient list, I don’t see cherry at all – possibly what I’m tasting is cranberry.  Granted, this blend is old now, but there are so many lovely ingredients here and I should be tasting SOME of them: apple, dates, cranberry slices, melon pieces, almond, cinnamon rods, pistachios, freeze-dried pumpkin pieces, fig pieces and cranberry slices, beetroot.   Figs!  Dates!  This is why I bought this blend (not to mention the cantaloupe) but this blend always tasted like this – nothing that it was remotely supposed to. So a very low rating for that.
Steep #1   // 12 minutes after boiling  // 3 minute steep
Steep #2  // just boiled //  45 minute steep
2020 Sipdowns: 74 ( Rishi – Pu-erh Vanilla Mint + sample of Teakruthi’s Ceylon Emerald)

But I’ve just opened up my 25 gram pouch, and it has white tea in it. I mean not JUST white tea, it also had some of the other ingredients listed (definitely apple, date, melon, almond, lots of fruity bits, and chamomile buds, which weren’t on the list either). But the white tea base was a surprise since it wasn’t in there! And the tea itself isn’t in the white tea section on the Tealux site, it’s filed under fruity tea. And as you can see in the picture that went with the listing, white tea isn’t visible.

This is a puzzler. Did they send me the wrong tea in the correctly labeled bag? It does resemble what’s pictured here, only with the addition of white tea leaves, possibly a bai mu dan.

On to the tasting! Dry the leaf had a vaguely fruity scent, a muted melon that was more watermelon than cantaloupe. Steeped the scent is all chamomile! I’m afraid to take a sip, but in the interests of science…well, it’s alright. Flavor-wise I’m getting very mellow fruit, but it’s a whisper under the warring tastes of white tea and chamomile. More of the fruitiness peeks out as it cools. I had dazzling visions of this being a bright sparkling fruity marvel of an iced tea, but I don’t think reality will see that through.

Let this cool to barely lukewarm and it just tastes like chamomile now. :(

Going to contact Tealux about this tomorrow and see what they say!