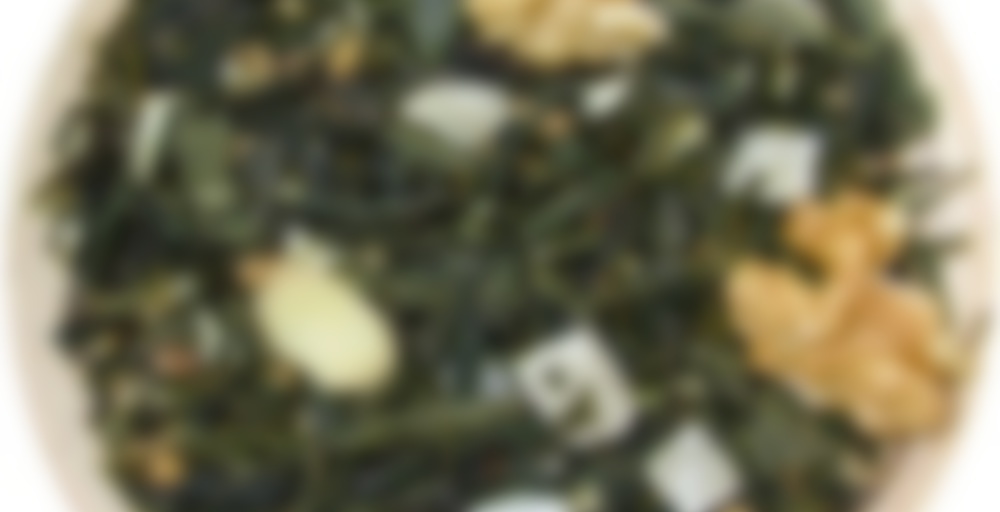 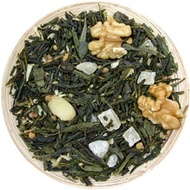 A sweet and rich green tea blend that is one of our most popular. Walnut Ave. green tea is a blend in honour of the coolest street in Toronto, Walnut Ave. – home to the Tealish modern tea boutique! The blend features fine organic green tea with walnuts, almonds, pineapple bits, coconut shreds, and brittle bits. An absolutely delicious infusion with an incredible aroma and a sweet nutty aftertaste. This green tea is amazing and many of our customers say that it’s like dessert in a cup!

So, I get this is a tea named after the street Tealish started on. Still, wouldn’t they, you know, use a walnut-based tea for this? Honestly, I picked this up and thought it would be like Nutty Enough or something instead of a tropical drink that it (seems to be) aiming for.

First off, I overleafed significantly, based on other reviews. I also brewed it at a low temperature for the same reason. It looks odd brewed up; I used a paper filter and yet it’s… chunky? Hard to describe. Thick. Velvet. Hard to see through.

I had to add a touch of stevia to this, and that’s when it really, really perked up. I get luscious, velvety, deep coconut with a pineapple twinge mid-way and well after the sip. I could see this being spectacular cold, with some booze added to it.

EDIT: Uh, okay. So there are supposed to be walnuts in here? I saw zero in my bag.

My cat is interfering with my drinking tea tonight.
They were doing fire alarm testing in my building today, including entering all the units to test the smoke detectors. My cat hates loud noises and doesn’t do well with strangers – this was going to be a bad day for him. I gave keys to my neighbor, and went to work – need to work if kitty wants roof over his head and food in his dish. While I understand he isn’t going to like it, I can’t really do anything about it.
I come home and he rejects food, lectures me for about 20 minutes, then plops himself down on top of me and won’t move – decided he needed to get caught up on all the sleep he missed and he was doing it using me as his pillow. I of course feel sorry for the cute little thing, and allow the clingyness. A hockey game and 3 hours later – he gets moved, and I finally get up and make more tea.

I’m telling stories rather than talk about the tea – yeah I’m avoiding commenting on it. Courtney generously sent me a sample. Thank you.
I can’t believe I’m going to say this, but here goes……. this is flat, lacking in flavor – there is nothing offensive, it’s just boring. I prefer Davids version of this.
Thanks Courtney for the opportunity to try it.

Ah, this is on my list to try as well, I have about 20g somewhere. I had big hopes for it… Tealish really talks this one up.

Generally I’ve liked the few Tealish teas I’ve tried, but this was a miss for me. Maybe you’ll do better with it….

Aw sorry! I haven’t had the David’s version in so long and I don’t mind this one, but maybe side by side would be a different story.

I received a sample of this from MirandaGou in our swap. Thank you for including this one.

This was amazing! I am not sure what I was expecting based on the name, but it was a sweet green tea with hints of a nutty flavor. I really liked it! I have it on my list to order the Lemon Meringue. If I ever get around to ordering this I will add Walnut Ave as well. Thanks for letting me try this MirandaGou!

This again is similar to David’s Toasted Walnut, and by similar, I mean essentially the same haha. Although I believe this one is ever so slightly less expensive. The walnut, almond, and green tea is a lovely combination, especially with the added sweetness of the brittle and pineapple. This tea doesn’t need anything to sweeten it up, and it’s nice to find a green tea base with flavours that clearly shine through, but don’t completely overpower the tea.

Toasted Walnut was always one I meant to go and get refilled, but never ended up doing. I’m definitely happy I ordered this one.

This is my #1 go to tea! It’s subtly sweet and nutty, no need for sugar. I don’t know what else to say except this green tea is the perfect green tea without being too fruity/sweet/etc.

Have you tried Toasted Walnut from Davids Tea? Wondering what the difference is….

Went to Chapter’s last night and discover they now carry quite a few brands of tea, only a few types from each.

I grabbed the Sweet Macaron, because well you can’t find macarons anywhere in town. So I was hoping for the patry macaron, as apposed to a coconut macaroon. I opened the tin when I got home & was highly disappointed that it looked just like Toasted Walnut from DAVIDsTEA. Now I love that specific tea, but was excited for something new.

And of course it tastes just like the DT version. So Naturally I really like it, but the name was very deceiving. I think it may be sweeter than the DT version.
Since I don’t have a DT close it’s nice to know I can go pick this one up whenever.

I wish that I had something witty to say about this tea…but it really just tastes like walnuts (and that’s rather delightful).

You can kinda taste the green base, but it seems as though it’s mainly there just to bump up the deliciousness and savoury goodness that is toasted walnut. I’m not entirely sure why I like this tea so much, but something about it just makes my tastebuds all kinds of happy.

I’m slightly undecided on whether I would order it myself, but it’s an enjoyable cup.

I think I need to try more tea with nuts in it. I have one that has almonds in it, but the almond does’t provide much and it seems overwhelmed by the other flavors. Walnuts, on the other hand, I think would provide great flavor to a tea. hmmm….

Yeah, I’ve not found almond teas to have that nutty flavour I really like…but this one has great walnut flavour. Pistachio Cream by DAVIDsTEA is another tasty nutty tea – I’m going to try and put it in the TTTTB. :)