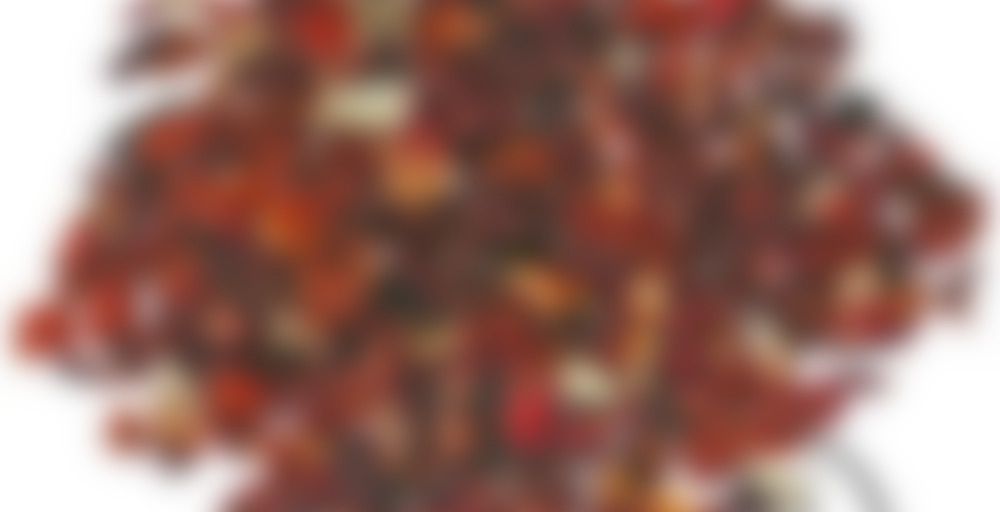 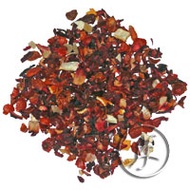 I wish that I had tried a different sample for my first TeaFrog venture as this one and I didn’t get along very well.

Initially, I thought it was going to be similar to Tazo Passion, Teavana Caribbean Breeze and The O Dor Je M’appelle Dorothee. It’s a pretty, chunky, blend with a lot of dark red and brown tones, and some lighter neutral colors that appear to be the tropical fruit. I could smell the hibiscus in the dry blend, but the main fragrance I got was currants, followed by the tropical fruit, primarily pineapple. So far so good.

On steeping it turned that beautiful dark red color that these other three tisanes share, but after that things took a different turn. Toward the extremely tart. I could smell the tartness in the aroma of the blend after steeping, and on tasting it was confirmed. Very tart, and slightly bitter around the edges (it stays with in the aftertaste and I’m thinking it is at least partially from the orange peel). Not what I generally prefer in a fruit blend as I like ’em sweet.

I put a bit of sweetener in to see how that would change things, and while it did sweeten up and bring out the fruit flavors more, it didn’t do much to turn around the bitter note.

So sadly, my first try was not a success. I have a lot of other samples, though, so I’m hopeful!

I have already had an upsetting amount of coffee today and the caffeine rush has passed, time for something calming and soothing. The raw tea smells like a chap stick – the pink “cherry” one that smells like artificial cherry and fruit and wax. This is most likely because I have no idea just how old it is, and it has been in the plastic pouch neighboring four other Tea Frog teas in my tea basket. I feel since I did not repackage them, that they have all melded in aroma. Oh well. I am not put-off by the smell, but the ingredients have me a little wary. There is a lot in here that could get bitter very easily…

That in mind, I go for a small batch, 1 tsp tea, hot water, no additives, infusion time: 3.5 minutes. The liquor is very pink. The aroma has liberated more, I smell hibiscus and citrus. The flavor is surprisingly mild, there is a slight tang to it, I wouldn’t say tart (I don’t think I let it infuse long enough to get tart) but a tang, most likely coming from hibiscus and rosehips. The flavor after the tang is predominantly mango, then a spike of pineapple and papaya flavors finished off by a high citrus note, most likely from the orange peel.

I don’t think this was bad. I think this needs some work. I think that this blended with a green tea or a white tea, maybe some sweetener, and maybe iced would be extremely refreshing. I did not try it this way, I should have enough to do so later…

My last teafrog sample, which I have been avoiding. Because I needed caffeeeeeeeeeine.

I’ll be honest, I actually already tried this tea once, but (stop me if you’ve heard this one) I completely forgot about it for nearly half an hour and by the time I got to it it was TART. Like…my mouth has puckered so much I can’t take another drink tart. With that kind of result due to my own scatterbrain-ness, I didn’t really want to review it. Besides which I would just have bee reusing material from my Stress Reliever post, like so:

Anyway, this is my second try of this tea then, this time with utilizing a somewhat more sensible steep time, hopefully to better effect for my enunciation.

No idea what color the tea brewed up as because it is night time and the light switch is ALL the way across the room. Red of some kind would be my guess! The result is still tart (no surprise there!) and I definitely get a sense of the bitterness around the edges that Morgana got although it’s not all that pronounced. (Actually I had completely failed to notice it until reading her note. Damn you knowledge! I want to go back to blissful ignorance nao, pls kthx)

While the tartness is not wholly unpleasant, it is still somewhat overwhelming and I am mainly filled with the urge to MIX this with something. But what? Assam Melody to the sort of rescue! Despite knowing that I would be kicking myself for it when I eventually slouched off to bed, I brewed up some Assam to see what there was to be seen. I brewed it for a relatively short time to avoid adding bitter oversteeped black tea to slightly bitter froot tea. The result? Interesting…I kind of wish I had a straight green to try this with and had more sample left to try it with the nonexistent straight green tea. It might have been good! I think the acidty of black tea doesn’t really fit the tang (TAAART) of the tea, but something a little more mellow, like a buttery green tea would complement it well.

That sounds kind of like more effort than I’m really willing to put into this tea though.

Another brilliant note: I laughed, I cried (from laugher), I felt a connection to my fellow man. Yeah, that’s some good stuff right there.

With this tea – while agreed it is a bit tart (sorry TAAART) – it blends AMAZINGLY well for an iced tea – I really should add that to the description. If you have enough left, and the willpower to experiment with it, try blending it 50/50 with lemonade. So make a half cup, chill and top with lemonade – heavenly! I make this in 10 liter (what’s that, about 50 gallons or something in American ;P~) batches for shows – and it FLY’S off the “shelf”.

See, I KNEW my urge to blend it with something was the correct one! I think I may need another sample :P