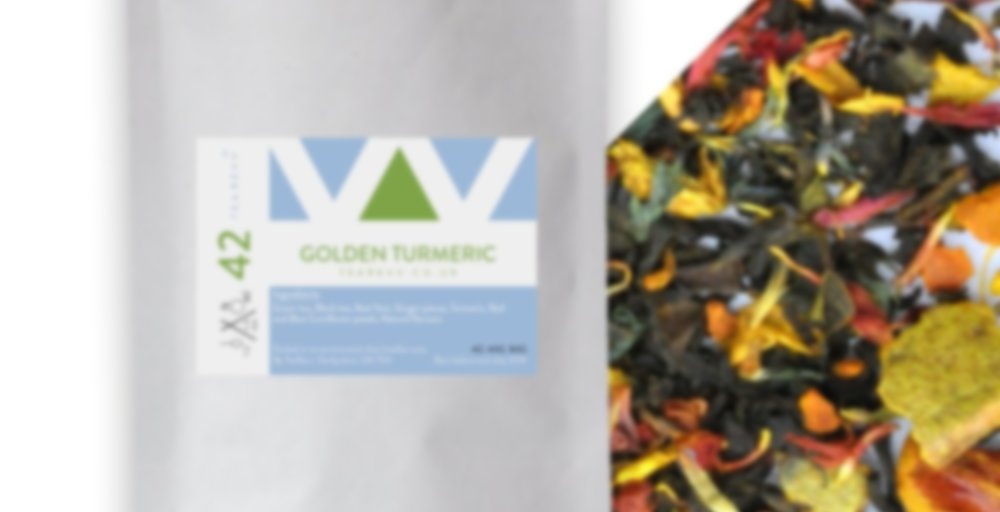 Black and green teas don’t often blend easily but this mix brings the two together very successfully with just enough turmeric for the slightly dry pungency of the spice to be subtly evident. An extra tingle of ginger makes for a lovely moorish balance of flavours.

Best Brewed: Hot/Iced
1-2 teaspoons, pour in the hot water (80℃), infuse for 1-3 minuets. We suggest you serve this one without milk. Brewing is part of the fun, experiment to find what you like the best.

Packed in an environment that handles nuts
Vegan / Contains Caffeine

Thanks so much for sending this, Tree Gal! I’m happy to try any tea… however this is…
turmeric…. and turmeric…. and turmeric….
with hardly notes of anything else that happens to be in the blend. The green tea/ black tea combo is also a bit odd, as I had to steep it cool for the green tea, so how much did the black tea really appear in the mug? Not sure, as all I could taste was TURMERIC. The color of the brew was also the color of TURMERIC. So I’ve found I’m just not a fan of turmeric… it’s just bitter and blah to me, therefore not a fan of this blend. Again, happy to try it though, even just to see that I don’t like turmeric.
2019 sipdowns: 37 (52Teas – Candy Cane marshmallow treat genmaicha)

Whoa, there has been like 4 tasting notes in the last 12 hours on my dashboard…

Same here. Glad you mentioned it cuz I thought something was wrong with my wifi. Ha!

Not Recommended
Cameron B.
3311 tasting notes

Hmm… I’m not sure I’m going to like this one. It smells extremely savory and there’s quite a bit of ground turmeric. Onward, into the breach! :P

The steeped tea doesn’t smell quite so savory. I mean… it’s not awful. It’s definitely quite earthy and tastes mostly of turmeric. I don’t get too much ginger, so that’s a relief. Strong ginger is definitely off-putting to me. I have no idea what a bael nut is, but it does taste somewhat nutty to me.

Overall, it actually reminds me quite a bit of potato. Raw potato, even, and with turmeric added. Definitely strange, but an interesting experience… I think I’ll leave off the rating, as this blend really isn’t up my alley.

Apparently when I was sick I described this as nice but I don’t like it. Not a fan. It’s not bad per se but not what I want in a tea either. So not for me and just not something I think is that great.