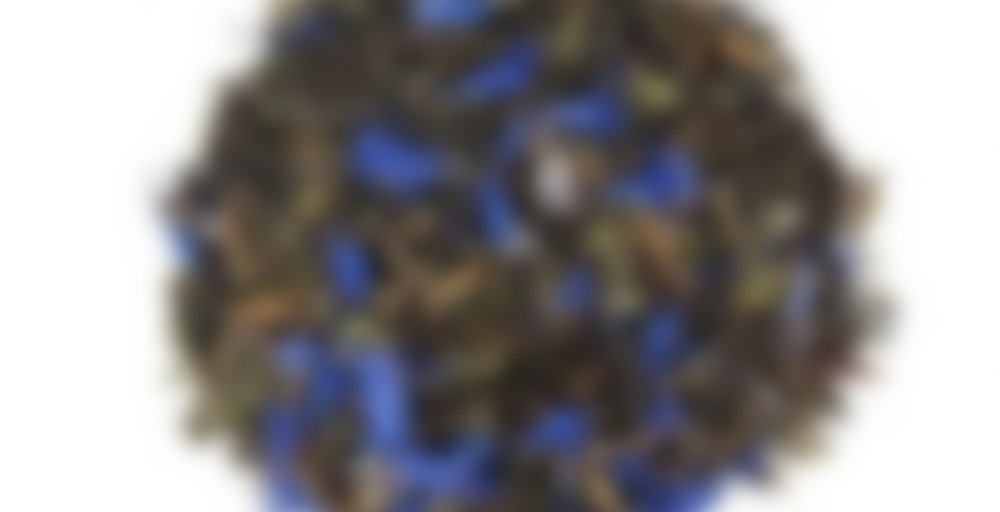 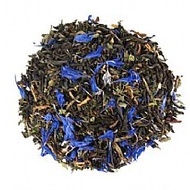 by Tea Palace
81
You

To celebrate our 4th birthday and our new home, we created this new and exclusive Covent Garden blend. A blend of the finest Chinese Yunnan tea and pure organic peppermint with flashes of cobalt blue cornflowers, it is a perfect after-dinner tea.
Place one teaspoon per cup into an infuser, filter or teapot. Add freshly boiled water and infuse for 4 minutes. Best enjoyed without milk.

This was a present from my daughters who just returned from Europe. I love that I get tea when they travel!

This is a beautiful blend when dry – black tea, broken mint leaves, and tons and tons of blue flowers! This is one that should be displayed in a tea dish before steeping as part of the whole tea experience, and would be wonderful to serve to guests after dinner.

The mint is strong but never overpowering. The tea base is smooth, mild, and sweet, not astringent at all. There is a little something….oolong-y?…about the base, a round sweetness that blossoms shyly and briefly at the end of the sip.

Thank you, Superanna! I won’t root through yours and your sister’s luggage looking for my Christmas present tea TOO much. LOL!

I read "There is something….oblong-y… Where are my glasses. What me go Whaaat? then chuckled when I realized I can’t read.

Some people describe their tea as round; why not oblong?

I’m having a cup of this deliciously minty tea whilst reading The Treatment by Mo Hayder. :)

minty is good. can’t wait to try this one!

It is a nice blend, it’s amazing how a little bit of mint can uplift the body and help stomach problems. Tasty and practical is a great combo. :)

I mixed one tsp of this with some spent blood orange black leaves. Perfection in a cup the peppermint shines through beautifully!

Hurrah! My second Tea Palace order arrived today, containing four new black teas none of which are already in the database. Typical. I’ll add them… later. Also, Steam now have a family sharing feature which gives me access to all the games that Husband has bought and vice versa, meaning that I have today discovered Terraria. Four hours have gone into that particular time-sink already… So let us celebrate with another post from the queue, and what better way to celebrate the arrival of a TP order than by posting about the last tea from the first TP order?

My last tea from the TP order.

This one is… It smells strongly of peppermint. What was I thinking??? Is it possible that I was simply seduced by all the pretty blue flowers? Yes, yes it is. It has Yunnan tea, peppermint and these blue flowers and that’s it. So what in the world possessed me to put the sample tin in my basket? Granted I’ve been more inclined to think favourably of a peppermint tea lately than I was just a year ago, but even so. It’s hardly a must-have sort of thing for me.

Oh well, perhaps I’ll be wiser once I’ve tasted it. As mentioned the aroma is very sweet and minty and the blend has pretty blue flowers. I’m not picking any note up from the base of it, though.

The taste comes across as an anonymous black tea with a lot of peppermint at first. It’s really very sweet with the mint here, and I’m only vaguely getting Yunnan-y hints from the base. The sense of the smell of hay and earth and ‘thickness’. But not the actual smell or taste of it.

Call me strange, but this is actually a sizable plus in my book.

I still can’t imagine why I bought this in the first place, but obviously I should trust my instincts in these matters.

(I checked the order confirmation and I did order it. It’s not another mistaken inclusion like the hong mao feng/mao feng confusion)