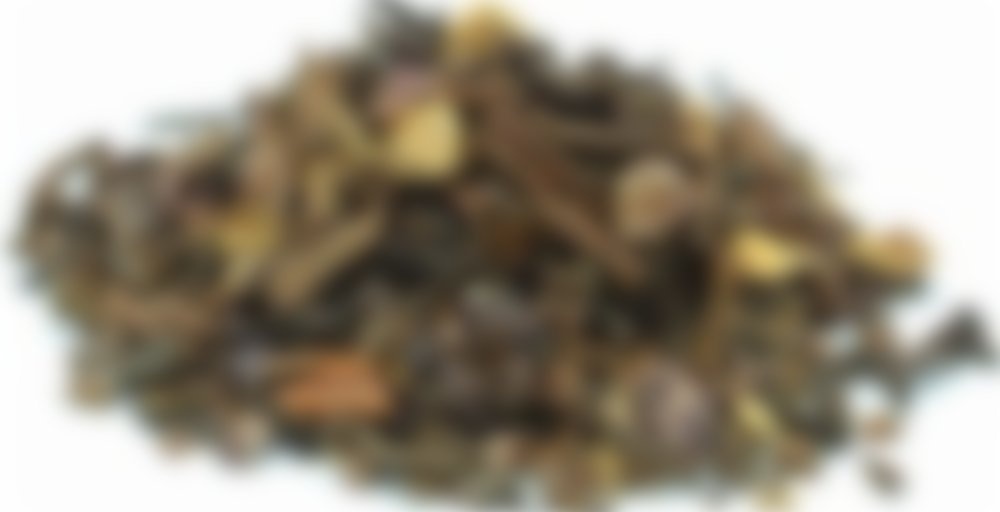 This is the wholesale source of:
Chocolate Ginger Bourbon by Par Avion Teas
Sue’s Blend by The Angry Tea Room

Tea for All Reasons 79

Trick or Treat! I got this tea from Par Avion Tea, and also as a sampler from the Here’s Hoping Teabox (as “Sue’s Blend” from The Angry Tea Room, so thank you tea-sipper and all contributors of the box!), both of which wholesale and repackage blends from Tea Guys.

For the Par Avion Tea batch, this tea just smells of candied ginger. And steeped… it just tastes of candied ginger, too. Where in the world is the chocolate? It lists roasted cocoa beans, dark chocolate chips, and dark cocoa powder in the ingredients, and there isn’t so much as a hint of chocolate anywhere in the flavor. None! Just a really, really sweet gingery taste (not spicy at all), like those sugary ginger candies. The flavor actually reminds me exactly of their Ginger Darjeeling Peach tea, minus the peach flavor. It’s rather bland, without any of the other flavor notes that should be in the tea coming through.

So I actually pulled out some of my leftover cocoa shells from the Simpson & Vail sampler to see if I could… I don’t know… force some chocolate flavor into this to try to make it taste how it should? That certainly helped a bit, but I still wasn’t getting strong chocolately notes, and I added half a gram of cocoa shells, so it seems to me the candied ginger is just so strong it simply overwhelms whatever they were trying to go for with a chocolately-ginger tea.

Yaaaa… I think I’ll use this one up the same way I used up the Ginger Darjeeling Peach, by cold-steeping it in lemonade, which left the lemonade with the candied ginger flavor and at least gave me some tasty lemonade, if nothing else.

The batch from the teabox was a bit better, actually having some chocolate notes present, which almost makes me wonder if Par Avion Tea received defunct product. The base tasted a bit like a bittersweet Mexican cocoa, with a nice spiciness to it. There is a sweet cinnamon flavor that settles onto the tongue, and then a warmer ginger spiciness that lingers in the aftertaste. I think the sweetness from the cinammon and the cocoa helps add a bit of balance there. There is a nice warmth and a slight kick, though. It reads more as Mexican cocoa than a chocolate ginger bourbon, but was a much better blend than the complete lack of chocolate found from the Par Avion leaf.

Very surprised by this one. The dry leaf was nice but just okay, but once brewed – yum! This tastes just like German chocolate cake … if it were a tea. The blend is spot on and is incredibly smooth from start to finish. I drank this one straight and can’t wait to try the latte recipe!