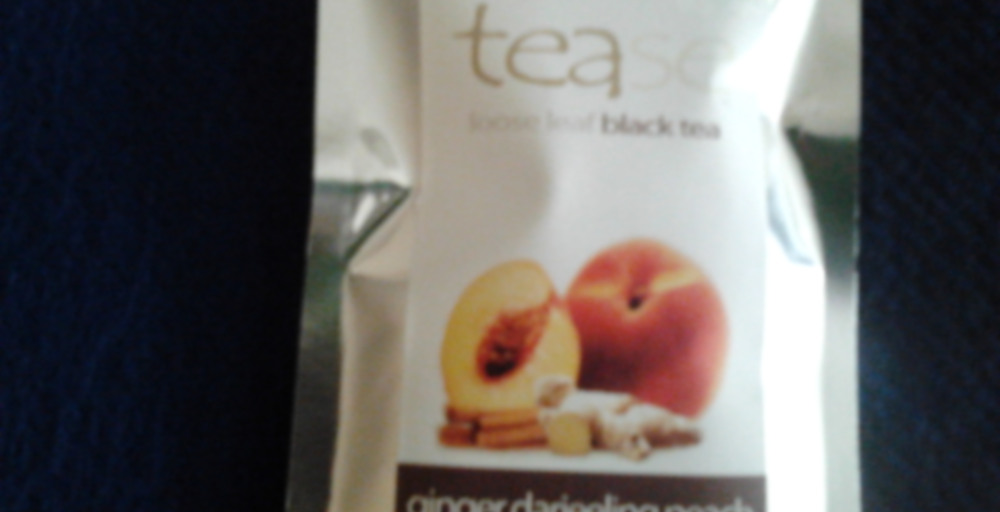 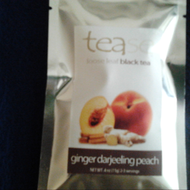 A fruity and aromatic blend of brisk Ceylon and Darjeeling black tea paired with freshly hand-ground ginger, sweet dried peaches and a touch of cinnamon and clove to provide additional sweetness and body. Wonderful hot, makes a delicious iced tea.

A review of ginger Darjeeling peach by Tease

This is another sample obtained from Heath’s Tea Room during my brief visit there. It is one of the two teas given to me by the proprietor, Kimberlie. I wanted Oolong tea but somehow ended up with black teas.

I took about half of what is in the tea bag/pouch and put in my teacup and poured boiling water over it and left to steep for a few minutes.

I examined the remainder of tea in the bag and could smell the cloves and as I poured out the bags content into my palm I could see the clove and I was pleasantly reminded how they look like little nails and very piquant. I am seeing the cut up ginger and very tiny bits of the peach.

With these spices present I am thinking this is a lovely tea to have on a cold day; an early morning brew or anytime of day needing a cup of spice tea (with not apple or pumpkin) but peach instead.

In removing the cover from tea I can discern tea’s color to be dark amber. It is not red, but very dark. I then pour the tea into another cup with a strainer to further examine tea. The tea’s liquor is a lovely mixture of the spices to be found in the cup; clove, ginger, peach and the fleeting cinnamon.

The taste of tea is smooth and very sweet and not at all astringent. Tea has a nice kick to it with the cloves layering evenly with the ginger.

Overall, this is a good cup of tea. It is a full bodied tea with a lovely spice fragrance and this tea would do well with a touch of milk and served very hot for sheerest of enjoyment to delight in the decadence that is to be found within this cup of Darjeeling tea.
Thank you for letting me experience this tea; the folks at Heath’s Tea Room of Rockport, ME.

This is a rather long analytic post, skip down for the actual tea review. I’ve been a bit confused trying to identify this company as they seem to have some multiple personality issues, possibly due to private labeling?

This and the Coconut Truffle by Tea Guys (www.teaguys.com) was my very first foray into gourmet loose leaf teas after my first broad order from Twinings of 8 different varieties of bagged teas which I was very happy with.

I had been looking at all the major brands of loose leaf (before I found this wonderful community) and became somewhat perplexed with the pricing structure in moving from the 20 bags per box at $2.99 a box to the huge variation in pricing loose leaf. Understanding the yield per ounce vs bag was my next challenge.

So being the Excel geek that I am, I started a spreadsheet plugging in the selling price at however many ounces then dividing down to get a per ounce price from them all and found the going rate to be around $3-$4 per ounce. Then reading around I gathered there are about 8-10 teaspoons per ounce (with usually 2-3 steepings per teaspoon).

THE TEA
The 6oz tea comes in an easy to open ziplock foil pouch for resealing and as soon as I opened it I was OVERWHELMED with the aroma. The fruitiness was stronger than a really strong potpourri and I was a little afraid it might be too much until I brewed my first 24oz pot. It was rich and aromatic with the peach being pretty strong but not nearly as overwhelming as the first whiff seemed. There is a spicy undertone from the ginger and the Darjeeling interweaves with the other flavors.

I love it with cream, sweetener, and a touch of honey. The only drawback is there is a lot of debris so use a fine mesh filter. I get a nearly as strong 2nd steeping in my 24oz pot from one heaping teaspoon.

I received this tea as a gift from my bestie Todd last Christmas. It came in a tin from Par Avion Teas, but a little Nancy Drewing has led me to discover that all their blends are wholesaled and repackaged blends from Tea Guys. Ergo, I’m posting this under the source rather than creating a listing under Par Avion Teas, because that’s just how I choose to roll. This tea is still the original Ginger Darjeeling Peach name and blend ingredients.

I actually did try a warm cuppa of this tea with my breakfast this morning, steeping a teaspoon in 200 F water for four minutes. The steeped tea is a very orangey color, and has a strong sweet gingery smell, but there is something slightly metallic about the aroma as well that is slightly off and makes me a little worried about the taste… Thankfully it doesn’t have a metallic taste, but I wouldn’t say I’m crazy about the flavor, either. There is a really nice candied ginger top note with this somewhat sweet cinnamon-tasting aftertaste that is very pleasant, but the peach flavor is a little subtle… I notice it faintly, but somehow it feels a little… watery, or subdued. The black tea base itself also just feels… weak, somehow. I do like that it isn’t extremely harsh and bitter and overpowers all the flavor of the tea, but at the same time, I just wish it felt a bit more substantial. Something just feels a little off about all of this. I wonder if I have to use double-leaf to get a decent tasting cup? But if I have to use extra leaf, then there is already something a bit off. Meh.

It tastes all right, just a bit lackluster, like the flavors should all be a little more fuller than they are. Except for the ginger element, which feels just right, as I don’t like ginger to be too overwhelming. But the base and the peach just feel like they need a bit more “oomph” in the warm cuppa to pull it all together. Then this could really be something nice!

I also made a quart of this iced, cold-steeping six teaspoons in lemonade. I normally never cold steep black tea, as I feel it just won’t release a strong enough flavor, but eh… I was curious (and I added a little extra leaf-to-water as a result). After my hot cuppa felt so meh on flavor, now I’m especially worried that there is going to be no flavor pulling through against this lemonade… ah well, moment of truth time!

Oddly enough, I’m surprised how well the tea works this way! There is something about the lemon that actually brings out the peach notes in a way that I just wasn’t getting from the tea before, and the citrus and peach blend really well together. The ginger still doesn’t come off too strongly, but has that sweet candied ginger/slightly cinnamon taste that hits at the end of the sip, and it also accompanies the lemonade really nicely. I’m not really getting any of the base black tea, but then, I felt the black tea was a little weak on its own anyway, so I’m happy enough that the peach is at least more flavorful, and the gingered peach does taste nice in the lemonade. Since the tea was kinda meh on its own, I may just use it up over the summer this way instead.