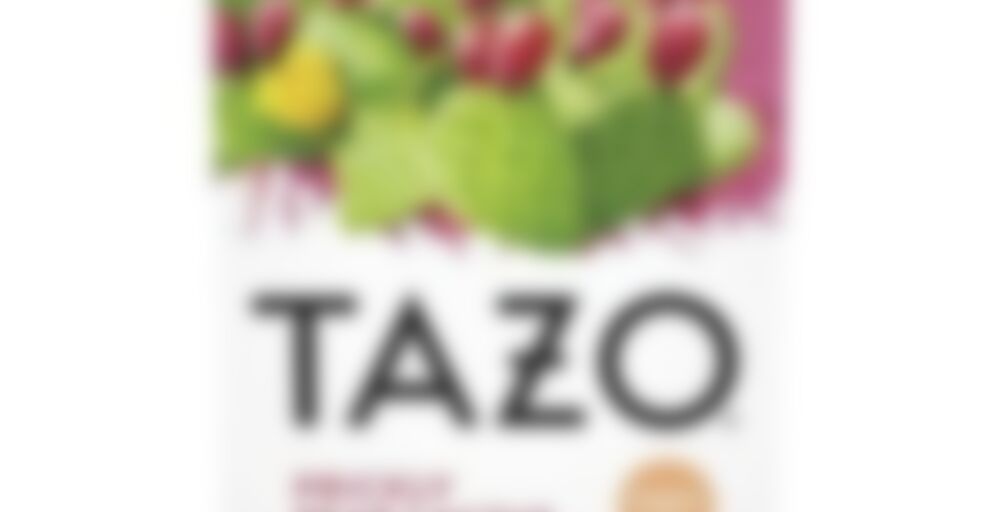 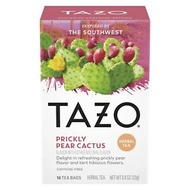 This is one of the four Target-exclusive Forager Edition herbals from Tazo, the one based on the Southwest US. So far, I have really enjoyed the Midwest “Wild Apple Sarsaparilla” and the Rockies “Juniper Mint Honey,” but really disliked the Northeast “Elderberry Blackberry.”

I was a little trepidatious about this one, as the “Elderberry Blackberry” listed chamomile quite high on the ingredients list, and this one does as well, and it’s a flavor I really dislike. I got a very off-putting soapy/baby powdery taste from the “Elderberry Blackberry” tea that I never could shake. And I’m picking up a bit of that same aroma here. But, there is a stronger melon/pear sort of aroma that is helping mask it a lot.

Thankfully, I’m okay with this on the sip. Perhaps it was the flavorings in the “Elderberry Blackberry” that created such an off-putting flavor, because I quite like this “prickly pear” flavor. It isn’t a flavor I could pinpoint very well myself (having tried prickly pear candy all of once in my life) but, I like it. It does have a strong mixed melon/pear sort of flavor, with a touch of florality. Hibi is listed first of the ingredients on the pouch, but honestly I don’t even notice it aside from a subtle pink hue to the yellow liquor of the brew (I’m a big hibi fan, so I wouldn’t have minded more of a presence from it, but for the vast majority of hibi-haters out there, don’t be turned off by its high placement on the ingredient listing). There is maybe a little citrusy-sort of tang, with a long steep? I’m not noticing the chamomile either, which is a bonus for me.

I don’t like this as much as the “Wild Apple Sarsaparilla” and the “Juniper Mint Honey”, but it is certainly enjoyable and I wouldn’t mind getting it again. I think this flavor will shine more prepared as a cold brew, which I’ll have to put on my to-do list.

That’s a reminder I need to hit Target soon for some Juniper Honey before it starts disappearing!

I really should do the same, as well!

Grabbed a bag from a tea box. This one smells great but isn’t as flavorful as I had hoped. Maybe I should have put it in a tinier mug. It ends up quite floral. I like chamomile, but this chamomile is a little soapy. There’s hibiscus, which adds a little tartness. I wish I had a second bag so I could try a more concentrated version.

I can’t think of what prickly pear tastes like. I’m pretty sure I’ve had it at some point, but I don’t think I could pick it out in a tea.

I saw this at our local Target and was curious.

TeBella has a prickly pear tea called Sweet Tango that I definitely want to reorder. Idk what they taste like really, but I enjoy things flavored like them!

I just got a box of this, would you like a few in our swap?

Oh that’s a great idea – thanks!