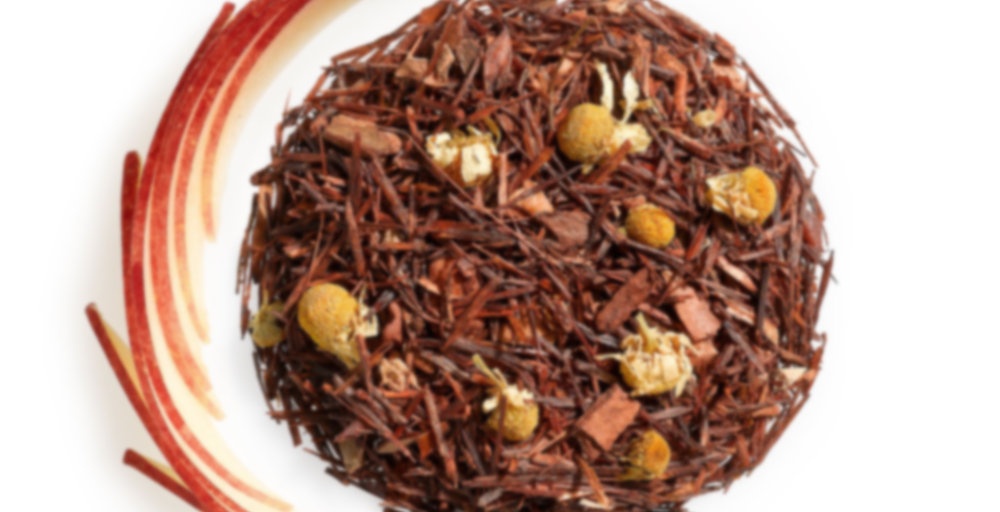 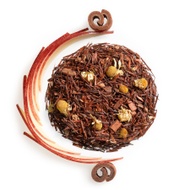 Sweet, creamy African rooibos lovingly pinches apple’s juicy, cinnamon-freckled cheeks. They spend the afternoon baking a caramelized pie together that tastes just like their favorite memories. One sip of this amazingly flavorful tea will bring you back to those warm summer days filled with apple pies cooling on the window sill.

Use one heaping teaspoon of loose leaves per 8 fl oz of 215° water. Let it steep for 5 minutes and wait for perfection.

An afternoon cuppa for me, but enjoyed with family around. After draining studying session.

Dry tea bag aroma was very familiar, but I couldn’t find anything to point on! Maybe it is similar to “Old Times Baked Apple” by Nordqvist? Does my smell memory picked this up, even it was 5 years ago since I had it?

Anyway, brewed it has got a wonderful aroma as well. Very genuine, apple with cinnamon. My mother, who adores teas with this flavour (and aromas) noticed it very soon as it was filling the living room.

Brewed, maye for more than intended 5 minutes, it has got also a very good flavour. Apples were pretty nice, cinnamon as well. The rooibos was good se well, adding its honeyish taste, however I think that black tea base would suit this tea much better. Why so? It was a little drying and a bit kind of flat. The mouthfeel wasn’t for the flavours long either and I think it is the biggest flaw.

Camomile is supposed to be in… but although I am quite sensitive to it, I haven’t noticed it at all in flavour, nor in aroma. Maybe because it complemented with the rooibos? I don’t know.

One of my all time hard to find favorites for any time of day. Don’t steep it too weak. Great w/ a little sugar.

I saved this one for later in the night since it’s a rooibos. It has that nutty rooibos flavor, and it smells very sweet and festive. For those who have Cracker Barrel restaurants, imagine walking into the front lobby. It smells just like that. Sweet cinnamon rooibos. This was a nice, nighttime treat. James especially enjoyed it. Devon Bartholomew – if you have a Whole Foods nearby, I checked and ours has this one available!

I don’t have that great a history with Tazo teas, and this tea didn’t help that whatsoever. I can’t put my finger on specifically what I don’t like about it. The apple flavor is very soft but doesn’t taste entirely like apple, and the cinnamon is very, very faint to me.

Finally! A cinnamon apple tea that doesn’t taste like chemicals! While it does taste a lot like cinnamon apple, the flavor is very light and nothing is overpowering about it, as you might find with some cinnamon teas. The aroma has a pleasant cinnamon-sweet smell. If you’re tired of cinnamon teas that taste artificial, I’d definitely recommend you give this one a try.

I made it to Whole Foods today to buy some more alternative health care crap.. :) They had this tea and I’ve been wanting to try it though I haven’t had a great experience with Tazo in the past. It’s a box of paper teabags but the bag smells really good after I unwrap it, cinnamon and apple-y goodness. After I brewed the cup, I inhaled the aroma which reminds me exactly of a baked apple. The tisane is good, there’s plenty of sweet apple flavor and lots of cinnamon too. There’s chamomile in here which you taste in the finish. I don’t get a whole lot of rooibos flavor, which could be a plus or a minus depending on your point of view. I might have preferred less chamomile and more rooibos, but I like it.

Overall not bad for a bagged tea. I don’t regret picking this one up… 1 teabag for 8 oz. of water. Looks like I might have found a replacement for the Simpson and Vail apple rooibos that I used to like.