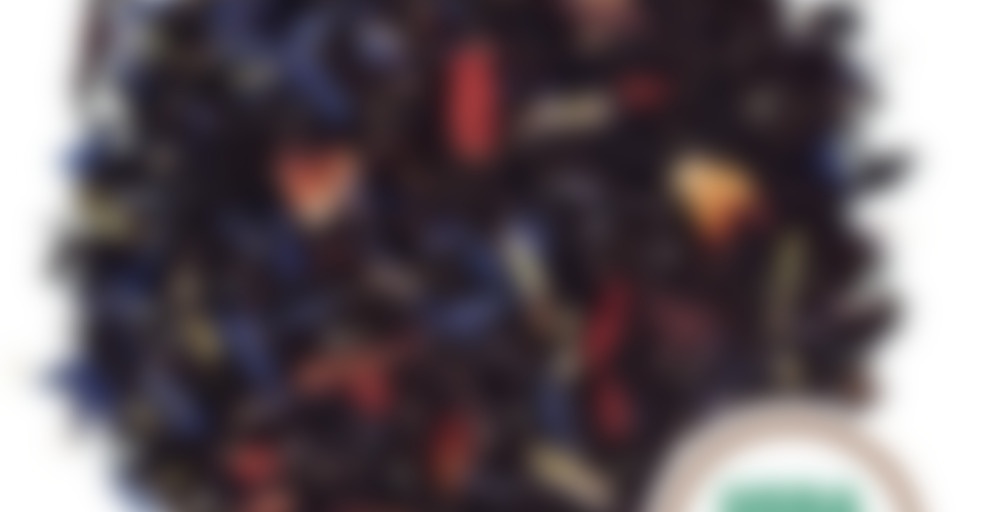 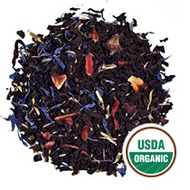 An organic high-grown Ceylon tea with wild blueberries, black currants, hibiscus, elderberries and corn flower petals. One heavenly sip of this tea is enough to make you go wild! A perfect tea to wake up to

I’m not familiar with Tay Tea; instead, I bought this packet through Amoda Tea’s Black Friday sale last year. It’s been sitting in my cupboard for a while, so honestly I just wanted to say that I used this tea up. This blend contains Ceylon black tea, blueberries, blackcurrants, blue cornflower petals, hibiscus and elderberries.

Looking at the dry leaf, it’s easy to see the blue flecks of cornflowers among the small, gnarly black leaves, as well as the occasional dried berry. I also saw small bits of red that could have been hibiscus. The smell is overwhelmingly of blueberries, to the point of it being kind of artificial – I like my blueberries on the tart side, while the smell here was reminiscent of pancakes and jam.

I took the entire sample of tea (about 10 grams) and cold-steeped it in about 5-6 cups of cold water overnight. I just eyeballed the amounts here, instead of doing something a bit more measured and scientific. I also added some sweetener to the pitcher to counteract the potential tartness of the hibiscus.

However, I have to admit that taste-wise, this didn’t really work for me. The blueberry/blackcurrant flavour was too strong, bordering on medicinal. I just chugged it in order to get the pitcher overwith.

Thanks for the sample VariaTEA! Which month’s Amoda box is this one from?

Out of the blends from VariaTea’s latest ‘care package’ this is a tea I was looking forward to a fair bit; despite the hibiscus in the blend which I personally think it completely unnecessary to include in most blends but especially in berry ones.

When I first started drinking teas I was actually rather hesitant about trying blueberry teas because I don’t actually like the fruit a whole lot, and I definitely don’t like the taste of anything artificially blueberry flavoured but when I finally did try out a couple blueberry blends I learned that it’s a flavour I surprisingly quite enjoy – especially when paired with a black base like this one is. In fact, my most logged tea on Steepster happens to currently be DT’s Blueberry Jam tea – it makes a great everyday sort of tea and brews up very consistently, so when I tried this one I was kind of internally measuring it against that blend.

Dry, the leaf smells mildly of blueberries and black currants with the faintest scent of something sweet and almost black licorice like – which is odd given that none of the listed ingredients are ones I’d associate with that sort of flavour or scent. Visually, I don’t see much (if any, really) hibiscus in the leaf I’ve measured out. I’m slightly relieved about that, though I wonder if it’s going to make for a skewed sampling.

Taste wise, the blueberry is definitely the first flavour here though it’s quickly followed by a little bit of elderberry and the sweeter side of black currant. I don’t actually know how much black currant is blended in here, but for people who dislike the medicinal taste black currant sometimes has I don’t really see that ever being a problem with this blend; it’s all sweet and jammy, and faint in contrast to the blueberry anyway. I will say that compared to Blueberry Jam, this has the same level of berry flavour with the same accuracy when it comes to how realistic it is.

The downside is the base. This had a recommended steep time of three to five minutes and I steeped on the lower end of the spectrum – three and a half minutes in total. Even with a steep on the low end of Tay Tea’s suggested spectrum it brewed up quite bitter, and sadly that bitterness is the finishing note which lingers well after you’ve finished the sip. It greatly detracts from what would otherwise be a very well done blueberry tea.

For that reason, I don’t think I’d order it for myself though I do think it’d be worthwhile to try it again with a steep time closer to two and a half minutes to see if the bitterness could be lessened without losing out on the robust blueberry notes.

This is one of the teas from the December Amoda box and when I opened the package, I immediately got a whiff of the juicy berry flavoring in the tea. It was amazing and as the tea steeped, the smell just got stronger. It was so familiar and so delectable but I could not place it…until I took my first sip. It tasted much like DAVIDs Blueberry Jam. It is not as jammy as that tea though due to (1) the addition of hibiscus which is quelling the sweetness and (2) the lack of stevia sweetener also leading to less sweetness. Instead, it is weaker and more like indulging in a bowl of berries. Tasty but not something I must have again.

from my December Amoda Teas box.

I wasn’t too excited to see that there was hibiscus in this blend. Hibiscus … ugh. I dislike this herb. I wish more tea companies would just say no to hibiscus.

Fortunately, the hibiscus is light here. It doesn’t add too much tartness nor does it add to the texture (I’m not getting that thick, syrupy ick from hibiscus here).

This is actually pretty tasty, a really nice berry tea. The blueberry is the top note. I get sweetness from the blueberry and a hint of tart. The currant gives this a slight wine-like note. I liked this cold too.

This one also came from the December Amoda box. I have to say, for some reason it seems like blueberry teas get the brunt of the hibiscus abuse. And that makes me sad, because I love blueberry, but I hate hibiscus. Hopefully it plays a small role here. The dry tea reminds me of a very specific blueberry-flavored something, unfortunately I can’t think of what it is. It’s a very sweet and jammy blueberry smell.

Unfortunately, I can already smell the hibiscus tartness in the steeped cup. Why must they do this to me? This has a much milder flavor than I expected. And the flavor is actually quite lovely, mostly (fresh) blueberry with no real tartness. However, it’s a teeny bit bitter even though I only steeped for 3 minutes, and other than that the base doesn’t taste like much. Also, a touch of astringency is showing itself already. I do enjoy the depth that the elderberries and currants add to the blueberry.