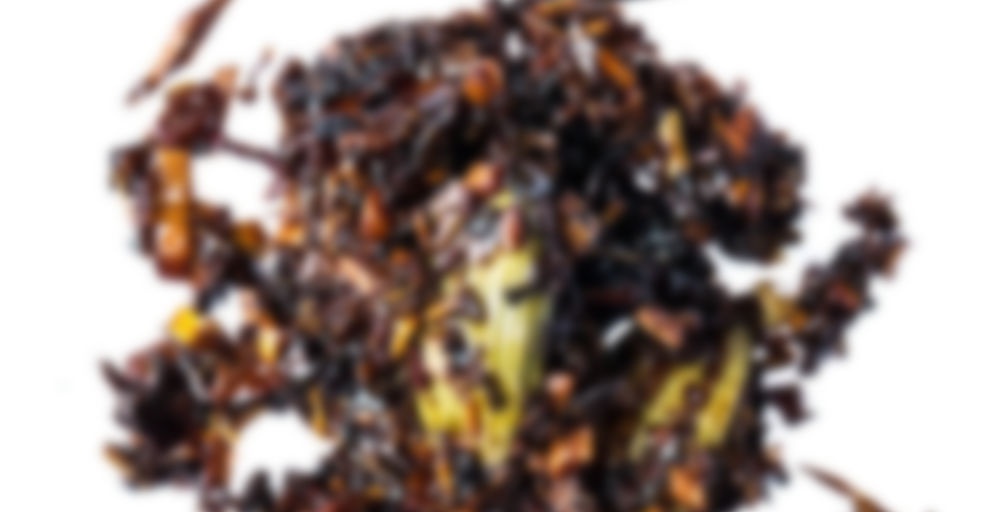 A sticky chai treat with a rooibos and honeybush spin! Hailing from South Africa, earthy rooibos and honeybush dance with all the usual suspects like cinnamon, cardamom and cloves before a wave of honey coats the whole lot.
For the perfect brew: Place 2 teaspoons Sticky Honey Chai and 250ml/8.4fl oz milk in a saucepan and heat, stirring constantly. Strain into a cup using a Sticky Chai Strainer. For a lighter brew, use an evenly split ratio of milk and water.

From last night and second steep tonight!  Thanks again for this one, AJRimmer.  It’s rooibos with a bit of spices and covered in sticky honey.  Not a bad cup – I wouldn’t mind MORE honey and spices.  Otherwise, the mug tastes like raisins and rum.  Somehow I was wishing for a rum-like cup before I steeped this up?  Or maybe I’ve tried this before and didn’t write a note?  Who knows.   The second steep wasn’t very red, even after steeping a long time – mostly spicy and seemed like a weaker rooibos chai.  But instantly upon sipping, it was comforting and I wanted to fall asleep.  Not the worst cup from T2 but somehow that bar has been very very low judging from the handful of T2 blends I have tried.
Steep #1 // 20 minutes after boiling // 2 minute steep
Steep #2 // just boiled // 21 minute steep

The directions for this say to cook it in milk on the stove. It accidentally boiled over, and when I was cleaning the stove, I got a rooibos splinter stuck in the skin under my fingernail, and I haven’t been able to get it out. That’s never happened before. Anyway, I’ve had this a few times now. I’m putting in a bit more leaf than it asks for, but even so it’s not too strongly flavored when brewed as instructed. It’s a bit buttery and salty. I decided to brew it normal Western style instead and just add a bit of milk, and the flavors were much clearer that way. The milk was probably covering some of the flavor before. It’s cardamom and warm rooibos. I like it. I bought 8 oz, which I would never normally do, but it was a really good deal. So we’ll see how long it takes to get through that. I’m craving it for the fourth day in a row, so that’s a pretty good sign. I’d probably buy a normal blend over a sticky blend in the future since I prefer to sweeten tea using artificial sweetener myself.