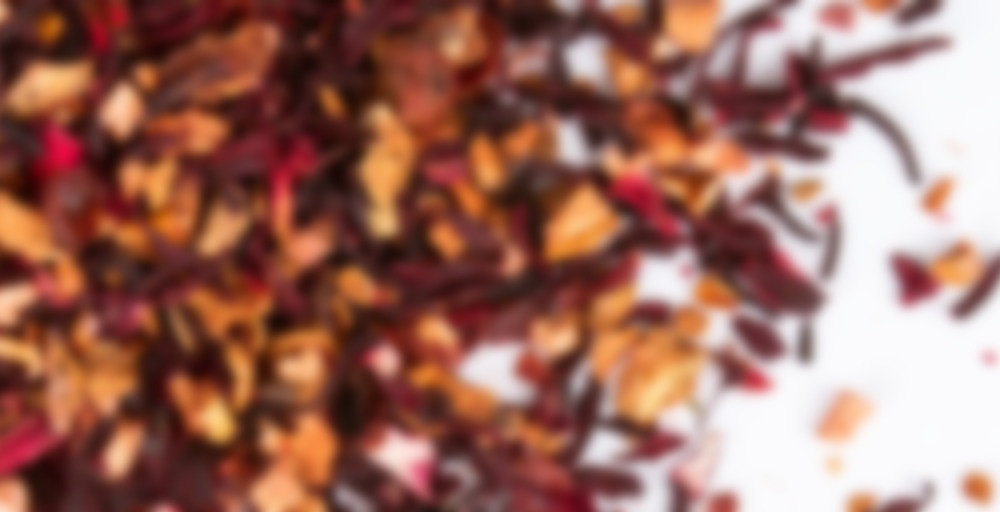 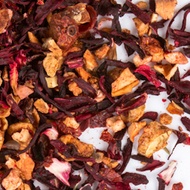 The essence of the Turkish grand bazaar, this tea will take you on a flavour journey with pumping pomegranate, tangy hibiscus, apple pieces and rosehip along for the ride. A sweet, tangy and mystical flavour with a liquor that brews a bright treat, this tisane is delicious hot or iced, and will get your tastebuds pumping!

Tropical fruit in the Temperate and Polar zones, strawberries and currants in the tropics, wheat in the Americas, tomatoes and potatoes in the Old World: there’s a lot to be said for the modern day supermarket that allows what was once regional and season food to be available year round and worldwide. As a regular drinker of tea, and a curry addict, I would be the last person to criticise, but there has been something lost in contrast to what has been gained. There is a part of me that longs for the time when spices like pepper and cloves, or fruits like pomegranates and bananas, or other consumables like tobacco, could invoke a sense of the exotic, of faraway places like the glittering cities of Arabian Nights or fading lithographs of Cairo and Calcutta.

Which brings me ratherly neatly to this fruit tea by T2. Pomegranates were something I had never tried until recently, but was aware of from Greek mythology and Persian cuisine. The first time I tried it was when I went berserk in a spice store in London and spent about 100 pounds on various spices including dried pomegranate seeds. Unfortunately, the one or two occasions I had bought a pomegranate, it was so tasteless and colourless that I threw it out. An Iranian flatmate a couple of years ago had given me a small bottle of pomegranate molasses which I used in various pilafs and salads not just for its sweet and sour taste but also for its hint of the exotic east.

The description on the box says “The essence of the Turkish grand bazaar . . . a sweet, tangy and mystical flavour” which was enough to sell me. Sitting here nursing a glass, it got me thinking how even two or three generations back, my Scottish or Russian ancestors would never taste or perhaps even heard of foreign flavours like pomegranates, almonds, chillies, etc.

This tea is such a beautiful, deep red. There is the ubiquitous rosehip which I imagine is for the colour as much as the Vitamin C. Does it actually have a taste of its own? There is a full-bodies flavour, a touch of sweetness and a nice little tang of sourness. I wouldn’t mind a little bit more sourness to balance out the sweetness, but I realise a lot of people will refuse to drink anything that is bitter or sour whereas I quite enjoy having a range of strong flavours throughout my day – I can’t think of anything worse than the usual bland sweetness of the modern diet.

I really hope that there is something similar in the US and Europe, but for everyone in Australia this tea is worth trying. It makes a nice counterpart to Hibiscus tea, or lemon tea when you need a change from black or green tea.

I really enjoyed this tea, if you’re quite new to fruit melanges like me – this might be a great place to start.

Its description is quite apt – it’s very tangy, a little bit tart but it has some definite sweet notes in the middle. The strongest flavours are the apple and pomegranate, with the rosehip and hibiscus lingering in the aftertaste. It has a lovely purple magenta colour when poured and smells absolutely gorgeous.

I had it black (or, pink) and while I know the tartness of the apple wouldn’t suit everyone, I adored it and will definitely drink this tea again.

Last but not least was Pumping Pomegranate, which I think is an unfortunate name. That’s one thing I’ve definitely observed about T2’s blend thus far – they don’t seem to have the whole fun naming thing totally down yet…

I probably would have iced or cold brewed this in normal circumstances but I didn’t think I was going to have enough leaf to do that in a flavourful way. I may have been wrong though because I did this as a hot cuppa and I found it INCREDIBLY flavourful. Really, really sweet and syrupy liquor matched by a tart and tangy hibiscus note that reminded me a lot of DT’s Queen of Tarts. Probably equal parts hibiscus to pomegranate/red fruit notes but there was something about it that kept pulling me back despite the sharp hibiscus notes. The finish was very good and just sweet enough.

Still think it would have been much better chilled though.

Advent Day 4
Hibiscus /shudder/.
These portions are TINY. It’s barely enough for one cup. I weighed it this morning and I think it was only 2 grams. Being hibiscus adverse, I decided to dump it into some cold water and come back to it later. I’m not getting pomegranate at all. To be fair it’s probably a really hard flavor to capture in something like tea. MAYBE it smells like pom a little, but it tastes like I melted a tube of cherry Chapstik in a cup of water and let it cool. And then added insult to injury by throwing in some hibiscus. This one is a hard no.

As someone who actually likes hibiscus, when I’m dealing with an herbal like this I need a whole lot more than 2g or it is always weaksauce. I feel like I specifically had that problem with some of the T2 fruit teas I tried in the past (Fruitalicious, was it?) where their sample was simply not enough for me to brew it the way I like those sorts of teas. It’s like I’d have to use a thimble of water. O_o

I used less water than I normally would to try to compensate, but it didn’t help me. :/

Looking up my old tea review on this, even I (as someone who isn’t hibi-averse) didn’t find anything resembling pomegranate in it.

Did you find chapstick? :D

Disclaimer: I usually hate all fruit teas. Had to be said.
I received a sample of it (loose tea) in the T2 2020 Advent calendar. What a horrible year it’s been – girl has got to treat herself, right?
For a fruit tea, it’s actually not too shabby at all! Not sweet, quite sour and refreshing. Would probably taste even better in the summer served cold.
It’s definitely drinkable, one of the best fruit teas I’ve tried so far.
Overall – won’t be buying again, I can definitely live without it, but it’s pretty good and worth a try. If you like refreshing fruit teas – you might love it!

This is one of those teas that you have to have cold. Even then, though, it’s quite tart and cidery. I can’t tell that it’s pomegranate clearly either. I really didn’t like my first two cups of this, but I found my third one tolerable. I’m now using this up by brewing large pitchers of it since I’ve finished all my rooibos that I was using for that purpose. Brewing such a large amount and having it sit for days seems to tame it a bit. Really couldn’t recommend though. Just tart and not that interesting.

Autumn Harvest! This is another of the ever-dwindling horde of T2 samplers I picked up from their mega-discount last January, when T2 was selling off old holiday stock cheap. I cold-steeped the whole two-serving sampler in 400ml of water overnight and strained the next morning to make a tall, cool glass of iced tea. Even in cool weather, I still prefer fruit teas like this iced, and especially find them a nice accompaniment with warm meals.

This is a very fruit punchy tea, and I do quite like those. It has that strong hibi-hip fruity, punchy base, but I find it hard to pick out a distinct flavor that I’d go, “Oh yes, that is definitely pomegranate!” To me it just sort of tastes like so many other tart and tangy red berry fruit teas I’ve had in the past, the sort that include cranberries and elderberries and have that really crisp and juicy fruity berry finish. But it doesn’t make me think of pomegranates. If I had to place any specific fruit the taste is reminding me of, I’d say cranberries is the most prominent flavor note coming through the fruit punchy base. And since pomegranate seems to be the angle of the tea, that makes me rather unimpressed, even though I’m perfectly fine with tart and tangy red berry fruit teas. But if I want one of those, I can always drink Red Berries by TeaSource, or Cranberry Apple by Metropolitan Tea Co. So, ya, my overall impression is underwhelmed. Even though it’s a perfectly servicable tea, if you want a tangy fruit tea, and aren’t specifically looking for something with a really defined pomegranate flavor.

Oooh, I’m just happy to now be in the know to keep my eyes open for a January-ish sale! I’m new to these guys, but I’ve really liked the teas I’ve tried so far. And honestly, this sounds like a tea I’d enjoy iced a lot, but I definitely understand the “meh” factor.

Ya, last January, right after Christmas, they had sampler packs on sale after Christmas and I bought one of each for like, $5 a piece? And each one had ten teas in them. There was a Fruity, Herbal, Flavored Blacks, Blacks, and Greens one. I’ve been making my way through them all year! I think they were overstock from the holidays.

I remember that sale, too! They also had some of their limited edition teas in boxes for $5 each. I totally spent like $60, entirely on $5 teas LOL!

I just checked my records, and I spent $40 during that sale as well!

While I’m not normally a fruity tea person, this one was the exception. Not bad hot, but amazing iced.

I’m not normally a huge fan of fruit tisanes, especially when they contain apple, but this makes such a beautiful, refreshing cold brew. It’s still tart and a little sour, but I find those flavours much more enjoyable iced, and a little simple syrup really takes the edge off. Definitely tastes of hibiscus, apple and pomegranate and the tartness that goes with them, but it’s bright and fruity underneath and it’s really quite pleasant. Throw some soda water on top, and I know what I’ll be drinking this summer.