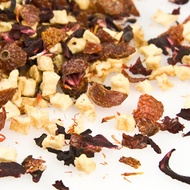 In Pursuit of Tea

I tasted this in store and bought a big tin because I having tasted T2’s Turkish Apple and Strawberries & Cream in store and using the small orange boxes up almost instantly I thought best to buy big and enjoy and not have to go back for more – such a mistake. Loved it in store and absolutely cannot stand it at home – I made it as per the store’s directions which are usually spot on but it came out like thick citrus flavored syrup – I tried watering it down but even with a drop in the cup and covered in water and ice it still was completely overpowering and the tang rather than being refreshing is sickly sweet (and I have a sweet tooth!). I went back to the store and tried to see if I followed the directions wrong – I hadn’t but they suggested using less and infusing for a shorter period – unfortunately same result.

The other day I was in T2 and they had an ice tea of this mixed with Turkish Cherry to try which I did and it was more palatable. I think the cherry somehow balanced out the tartness as opposed to Turkish Apple which I tried with it and that seemed to highlight the ‘tang’ quality.

I would only recommend this to people who really, really, really love citrus flavours and want a tissane that is full flavoured and sweet on its own. I personally love orange and lemon in most things but find this tea is just too overpowering for me. I have tried it hot and again did not like it although it did seem less intense hot, iced seems to highlight the ‘tang’ of the tea. Would definitely recommend adding Turkish Cherry if you’re making this iced.

A Berry Frui-tea July! Decided to cold brew another of my T2 sampler stash. Their samplers are only enough to make half a quart, but at least it steeps fairly quickly as far as cold brewing goes. This is their Citrus Punch, which as far as I can tell, doesn’t seem to be available anymore.

This is a pretty standard hibi-hip blend. The base is a very thick fruit punchy tart/tangy hibiscus. I also pick up a subtle note of lemon zest, and more prominently, notes of orange and, oddly enough, coconut, though there aren’t any indications of it being in the blend (unless that is one of the added flavorings?) The blend is tangy but still quite sweet from all the added apple, and a nice iced tea. I actually think that surprise coconut flavor was my favorite part, since I wasn’t expecting it.

This morning I made up an overnight cold brew of this blend and subsequently threw out the rest because it reminds me of my ex boyfriend and I don’t even really like it (I got a box for free in a promo maybe around this time last year but I’m much better at throwing things away these days). We’ll see how the cold brew goes.

I’m actually not huge on tisanes or iced teas. This one came as a free gift with an order from T2 as part of their Christmas promo so I figured, hey it’s summer, hey it’s free tea, so hey why not try it! I prepared it iced, as per T2 instructions, and I was actually expecting something a lot sweeter and something obnoxiously overpowering (I’m not a tisane person at all) but was pleasantly surprised.

There was more tang to it than the sweetness I expected. I suppose it tasted a little watered down (it could be a brewing issue on my end but hey, it’s better than my first try which was essentially just red water haha) but as I already iterated in another tasting note, I like my tea strong. It was all in all a decent iced tea but I think I’ll try it out with some fruit next time to add some more flavour. I say next time because I’m so terrible that there is no fresh fruit in my fridge at the moment