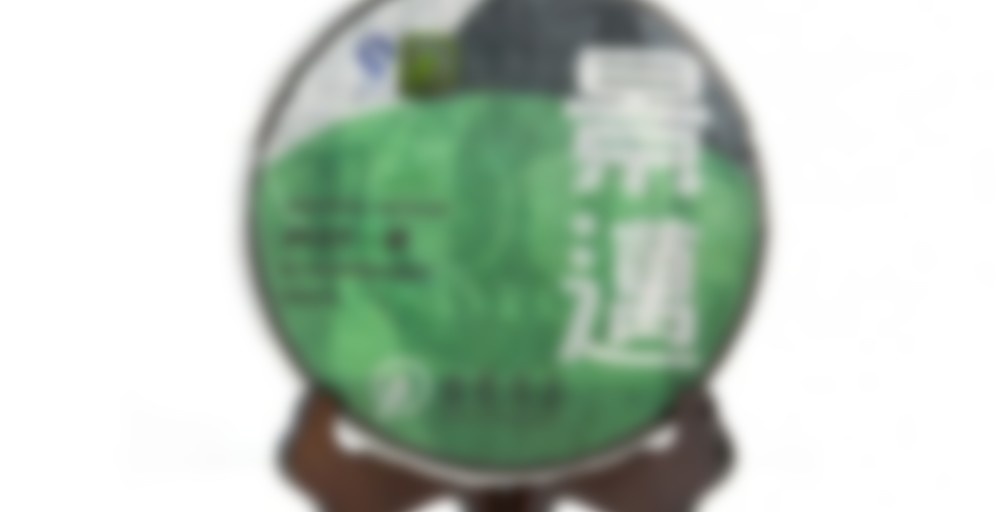 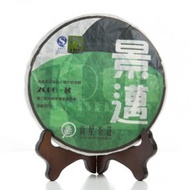 This cake is the star of the tenth anniversary of the development of special commemorative cake. Tea leaf hypertrophy, thick strip, sweet and supple tea entrance, level and back to rhyme is also quite good. Tea cake arrived in Hong Kong, the smoky taste quite heavy, to cover up the sweet taste of tea itself, tea flavor is also more intense. After several years of aging, smoked flavor has faded, whereas sweet, floral scent. If the re-existence of a few years, I believe it is a Jiapin, packaging design is Yang word series other than the style.

I’m brewing about 6.75g of this from LiquidProust’s group buy. The dry/warmed leaf smells musty and a bit spicy. With a rinse, those aromas are intensified and some leather is apparent.

The first flash steep is a slightly cloudy light orange color. The flavor is very light – my sample was pretty compressed and will take awhile to open up in the gaiwan. Steep 2 is darker and getting fuller in taste. It’s smooth with some background sweetness and mustiness. I don’t really notice much storage taste, so I’m guessing conditions were quite dry for this cake.

Subsequent steeps are thicker and cloudier as the compression continues to open up. There’s a very light drying effect on the tongue. Not enough to bother me.

At steep 6 or 7 I decide to push this tea a little wrt to time. It’s darker – orange bordering on orange red and the bitter backbone of this tea is much more obvious. Not the best steep of the bunch but I was curious.

Nothing about this tea really stands out to me, but it should be interesting to go back to after I’ve tried the other teas from this group buy. It was certainly enjoyable, but maybe not in proportion to the price on Sunsing’s website (to my taste buds, at least).

Friday night and I finally had time to dedicate to a brewing so I pulled out the Pubertea teas. Heard some talk about this and pulled out the 4g I had left from everyone and knew I had to be careful with the brew.

The leaf has a good rustic look to it and a decent smell. This was one of the cheaper aged shengs surprisingly, but I choose it for what it is to Sunsing and all; it’s also my first Sunsing tea : )

The first brew was a bit murky with some real smokey notes coming through and a little grit. It might be the dust I brewed with, but this tea seemed like it was going to be a journey through the sand. The next few brews still had some rather strong smoke for the age it is, but it is clear that this has been stored more dry than humid as the tasting goes on. Sides of the mouth have decent dryness going on but the aged taste that comes through makes it enjoyable.

Around the 8th steep and I’m getting use to the taste to which each sip comes with a cooling taste at the end as if I ate a warm cucumber… if that makes sense. Still not the best in taste, some depth still there, and slight smoke. No qi, oh well. For what it is: There’s plenty of room for this tea to develop based on how it is stored from here on out. The price isn’t so bad either compared to others, but it really does need some airing and a little humidity to bring it to life and maybe even add some legs to it because I feel as if something is holding this back. The leaf is quite beautiful and I am curious as to what Sunsing’s own Yiwu pressings are like.

The first tea I have tried from the Pubertea group buy put together by LiquidProust, pulled out of the bag at random. The leaf on this one smelled slightly leather and musty, though I wasn’t getting much of any strong aromas from it. I brewed it up in my Jianshui teapot with boiled water.

The first steep was leathery with a bit of a smoky aftertaste. Not particularly pleasant, but thankfully the leather only persisted for this single steep. Could be solved with a second rinse, but it’s still drinkable so no point there.

Steeps 2-5 are extremely thick – by the third steep I was almost chewing it. The flavors were sweet, a little hard to place, I’m thinking bamboo perhaps and slightly vegetal. Also inklings of vanilla in the middle of the sip. The smoky flavor in the aftertaste persists as well, coming through as a slight BBQ note in the finish. Sounds unpleasant, and it would have been if it were stronger, but it’s really just an echo on the end of the sip, and one of the rare times a smoky flavor has kind of added to a tea rather than subtracted from it for me. If I had to guess, I’d say this tea was a bit smokier in its youth and this is all that remains. I was feeling this tea quite a bit in my throat and the back of my mouth. Not really getting much of anything in the way of qi.

Steeps 6-8 presented a brew which I described as “cleaner.” So mostly the same flavor, but the meaty BBQ aftertaste was gone. In my first session, I had to pause it after steep 8 to go run some errands. While I was riding around in the car for around an hour, I could still feel this tea in my stomach and chest, and felt just a tiiiny teadrunk fuzziness. Not much, and I didn’t notice it while I was actually drinking the tea.

Steeps 8-11 were a little bit lighter all around. The flavor and thickness were less intense. More silky than what it was before, when it almost felt like pudding. Occasional spice notes on the front and still getting the odd hint of vanilla.

Steeps 12-19 were very soft and sweet in flavor. The texture would come and go, depending on how long I steeped it for, never returning to the crazy heights it had in the early session. The last two steeps were really all texture with little to no flavor remaining aside from maybe a sweet feeling in the mouth.

This was a good tea, and makes me excited not only for the rest of Pubertea, but also for trying more quality aged sheng. Most of my puerh exploration has been on the younger side of sheng to this point, which I certainly enjoy, but these teas promise a different and exciting experience of their own. I’m curious to see if all of the good aged sheng I try is this thick in the mouth. The only young sheng I’ve had that approach this thickness are some of the W2T productions.