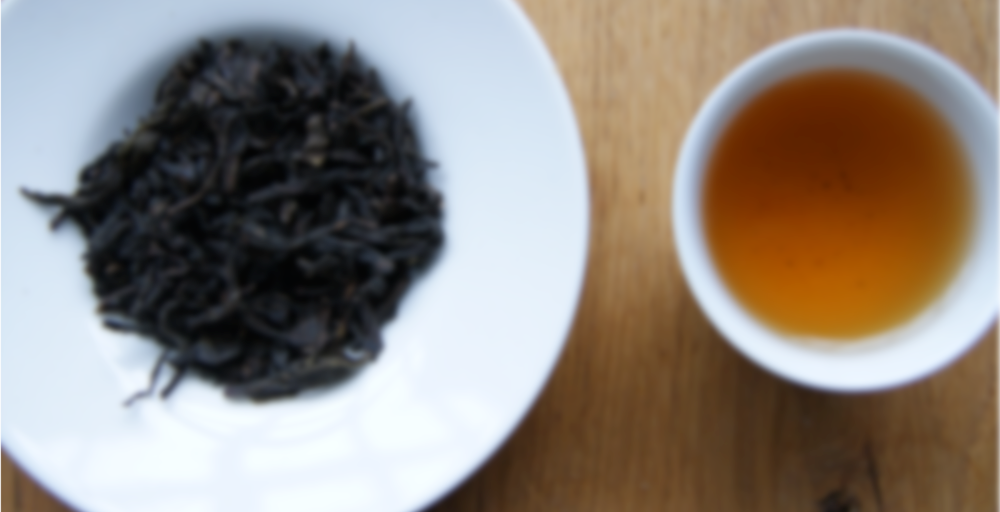 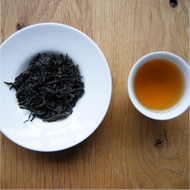 A gorgeous wuyi oolong with a deep rich liquor, big aroma, and a complex flavor that lasts steep after steep.

Tasting Notes:
Caramelized sugar and grains with a floral finish.

Sipdown #32
I had planned to do short steepings with this one in my yixing, but I didn’t. I went with the steepster select suggested prep. This is a nice one, although not better than any in my collection.
Time to make some lunch.

I really liked this one. I need to start experimenting with more of these, especially if this isn’t all that mind blowing for the genre.

Do you want me to include a few in the next BBBB?

That would be awesome! Thanks!

Grabbed this one at random from my steepster box and kind of groaned. I don’t love oolongs, but it’s what I grabbed so I made it exactly per the instructions on the bag.

The first thought upon sipping it, “holy crap, this is tasty!” It tasted like a burnt hazelnut caramel. Seriously delicious. I’ve had other red robes and they are just roasty, like hojicha. This one has some seriously yummy flavor to back up the roast. Would definitely order this if I could. Can I?

I don’t like the floral or green ones. But this one is almost like what I want coffee to taste like when I smell it and it never does. Sorry dude, this one has me a tad curious another similar ones….

Big Red Robe is my favorite oolong type. I have several, so let me know if you want samples added to your next BBBB :)

not a huge fan of floral oolongs either (tho i can tolerate them if the ‘orchid’ note is slight), but did you say hojicha?? i’d much prefer something toasty…this sounds yummy! and the burnt caramel note sounds too good to pass up, wow…

Wowzah!!!
I’m loving all these new teas that I’m falling in love with through steepster select!
I loved this one too!

This is my second encounter with Red Robe… But I am far more in favor of this one!

The chocolatey aroma is apparent at first steep! The taste of hazelnut and caramel are definitely apparent and as it cools the floral notes become more apparent.

The info card that is included with each steepster select box describes this tea perfectly!

“Quite possibly THE perfect winter tea. A gorgeous wuyi oolong with a deep rich liquor, big aroma, and a complex flavor that lasts steep after steep. A tea for snowy weather.”

That it is! The perfect winter tea. Complex yes… Cozy yes…. Do i love it?

It is beyond divine!

I loved this one, too! So caramely!

I have been freezing all might. I saw your post and it made me grab this and brew it up. Amazing cup!!!

Steeped this according to the instructions on the package. Just off boiling and for about a minute and a half. Maybe a bit longer because I didn’t hit the timer on my microwave immediately.

I added sweetener because I do that. The smell of the tea is really that of grains, like the descriptions say. I’m not picking up any carmelized sugar yet. Waiting for it to cool off enough not to burn my tongue.

Keep in mind for this review, I am a relative newbie to oolongs and this might be my first taste of a Red Robe. I’m expecting to like it, but my tastes haven’t really evolved enough to identify what I pick up. I have a good memory for ‘I have tasted this before’ and a bad memory for ‘and this is what it is called’.

The first steep of this tastes rather grainy as well. Not in a bad way, like really nice bread but without the chewiness. This is still rather hot for me to be drinking this, I’ll wait for it to cool down a little before drinking more.

If something changes in further steeps, I shall come back and edit this note.

This tea is from the January 2014 Steepster Box.

Okay, I really thought I had reviewed this already, but I think I just drank a cup and then read BrewTEAllySweet’s review and agreed with her! I love this. Where can I get more? The first steep was roasty, almost coffee-ish. Very calming and warming on this VERY cold night. Second steep just as awesome. A little less chocolate tasting and more roasty tasting.

Mm, dry leaf smells chocolatey, and little like H&S’s Florence, so I guess I’m getting hazelnut? Brewing in my 5oz gaiwan again, since that worked so well for the last Steepster select.

And, just broke my gaiwan saucer, so I’m going to have to finish this later!

Edit: I ended up chilling most of this to drink later – it was very tasty iced. I don’t think I was getting the chocolate in the liquor that I noticed int he dry leaf, but it was pleasantly roasty in the way that chocolate, coffee, nuts etc. are

first infusion done perfectly according to instructions and was pleasantly plump, but definitely not as rich as i’d hoped. never got any sweet, sugar, or caramel notes.

second infusion is falling flat, it is a perfectly serviceable tea, but i may as well add milk and sugar and slurp it down in 3 minutes. not worth savoring as i had hoped. alas.

The dry leaves are dark brown, curled and twisted; they have a sugary & earthy scent.
Brewed, the leaves and liquor have the dominant scent of roasted nuts. The liquor is a pretty amber color and as it cools, I detect the caramelized sugar as the package suggests.

The flavor is all caramelized sugar!!!!! OHMY!! It’s like cracking the top of a crème brûlée !!! Amazing!!! This just became the type of tea I will devote to my first Yixing pot. Unicorns and Euphoria!!! So delicious!!!!

There is a caffeine high too—this is why I usually drink white tea because I don’t want a lot of caffeine high. I had to make myself stop drinking this after I had drunk it all and re-steeped it and was drinking that too all in a short time instead of my usual throughout the day.

I wish we could purchase this particular tea but I will definitely be purchasing more Da Hong Pao Red Robe type teas.

From the Steepster Select Box, January 2014

This puts the TEA in complexiTEA. (rimshot)

Honestly, this tea made me feel like a novice trying to decipher its complex offerings of layered flavors and aromas. For a while I wasn’t sure how to describe them, but some reflection and time with the tea made it clearer, and the later infusions brought out hidden qualities that were present in the earlier infusions but I couldn’t quite put my thumb on before.

This is my first time with a Red Robe. I had high expectations since it is a rather well-known and prestigious tea. I can say my expectations were well met.

The aroma has consistent notes of cinnamon, and for the first several infusions was very woodsy with notes of amber and hay. The amber notes are especially evident when smelling the wet leaves. As for the flavor, it really evolved a lot from one steeping to the next. The common denominator was the sweet cinnamon taste. In earlier steepings it was very woodsy with flavors of sunflower seeds. Later steepings mellowed out and revealed nutmeg and sandalwood. The sweetness accompanying this tea throughout started out like molasses but gradually got lighter with each steeping, moving to an unmistakable caramel note, then becoming more like honey by the fourth or fifth infusion.

These notes all come together to make a really complex cup that is very warming and very “red”. It’s a wonderful and unique tea. Not exactly my tastes, as I tend to be lured by more bright and fresh tasting teas and this one is definitely deep and bold. I couldn’t see myself drinking it often, but I would definitely like to revisit it every once in a while.

EDIT: I have finally gotten around to drinking the other packet of this and I am doing this the more traditional Gongfu way for Wuyi oolong, which I’ve learned is to use more leaf and less time, so I’m infusing 4g in 100ml of water for about 10 seconds followed by flash infusions. I can say this definitely yields a much lighter result. Sweet, but with a seriously thick mouthfeel and still plenty of flavor. I would recommend this method over the previous one I used.

This variety of oolong is my personal favorite. This cultivar is more mild than others I have tried. The taste is light and sweet. The complexity diminished quickly with successive steeps, and I wouldn’t recommend more than two.