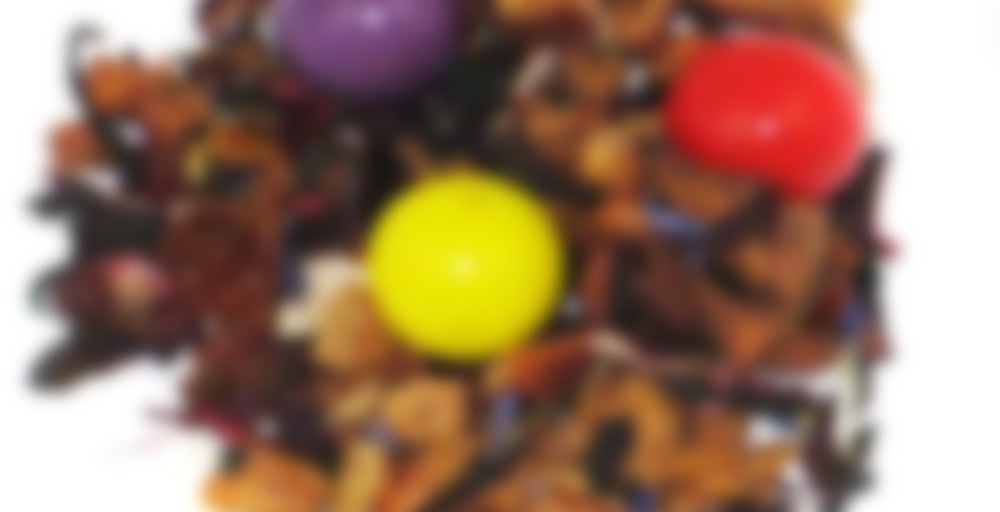 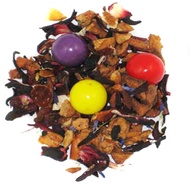 by Steeped Tea
75
You

Perfect for kids who can chew their bubblegum as this strawberry and lemon sensation brews!

And again I don’t listen & brewed this up with the gum still in it, when a globby white chunk floated to the top I freaked, until I remembered it was the gum…. oops

I made this into an iced tea in my new beverage dispenser, I ended up using the full 50g in this jug & it was only about half full. I added some rock sugar, because I expected my girls to drink it. We’ll see what’s left when I get home.

I have to say profile wise it’s pretty similar to Jelly Bean Dream, except I definitely get bubble gum aspects. So it could totally be psychological, but whatever I taste it.
It’s sweet strawberry followed by bubble gum. Yummy!
Strawberry wise though it is nothing like Wild Strawberry from my local tea shop, it’s more like candy strawberry.

Why would they put bubblegum pieces in it if you’re just supposed to remove them before brewing? Weird. A globby white chunk of anything floating in my brewing basket would freak me out too! Yuck! LOL!

Before I actually review this tea, let me express my annoyance:

This tea costs $8.50/50 grams, which is already overpriced if you ask me (granted if you buy 100 grams it’s $14, but anyways…). I then get the tea and the package tells me to remove the bubblegum out because it’s just for aesthetic purposes only, so I weigh the tea before and after removing the gum. The gum weighed TEN GRAMS. That means I actually paid $8.5/40 grams of tea, which would have meant without the gum, if I got 50 grams of tea it would have been $10.63. That’s bullshit if you ask me considering this tea is just fruit pieces, hibiscus and some different flower pieces. Wayy overpriced.

Anyways, onto the review:

I steeped about 15 tsp of tea in 2L of boiling water for about 15 or so min (hibiscus was lower on the ingredients list so I wasn’t considered about it being overly tart). Afterwards I pulled out the filter and let it cool off in the fridge. The taste of this tea is mildly tart with fruity undertones. Pretty standard flavour I’ve been having all summer with different teas. I may try steeping it a little less to see if any other flavours come through, but as mentioned, it’s not really unique in anyway.

Overall the tea is alright but I will not be repurchasing. After removing the bubblegum I get less tea than what I pay for, and the 40 grams of usable tea will only get me 1.5, maybe 2, pitchers of iced tea (which is more than $4 per pitcher). The flavour is nothing unique, and I’ve been very impressed with some celestial seasoning’s fruit teas (which equal out to $1 or less per pitcher). Also, for a tea that’s called bubblegum, this has no bubblegum taste. Just 5 cent bubblegum pieces I get to throw away.

I would be so pissed if I got a tea that is 20% garbage that I need to shift out. That sucks.

The gimmick is that kids chew on the bubblegum while watching the tea steep. Makes no sense to me.

steeped tea is pretty much a ripoff unless you like blends

I find their herbals especially to be pricey compared to other companies. Granted, if you buy 100 grams of a tea it’s not as expensive per gram as if you were to buy just 50 grams, but it’s still pricey.

I’ve had this one twice now, once with a bubblegum in my steeper, and once without. The addition of the gum definitely sweetens up the tea a little, which I like, but I also like the more tart version of this. I had high hopes for this one, since it’s a fruit tea that has a couple of my favourite flavours, and I wasn’t disappointed! Will have to pick up some more of this the next time I order from this company. :)

Added a gumball this time, this is my pick me up for the early mornings I have been having to endure at work lately. A great start to the day!

I occasionally enjoy a mug of this stuff but not entirely my favorite. My boyfriend absolutely hates it. Alright, not a winner not a loser.

I’m not a big fan of fruit teas, but my children LOVE this one, served chilled with only a little sweetener. They have started choosing this over juice at snack time.