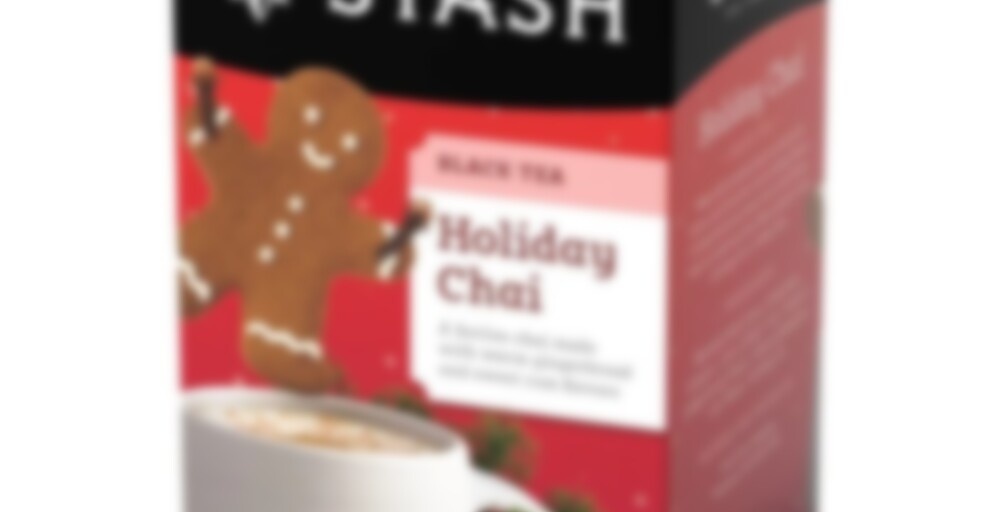 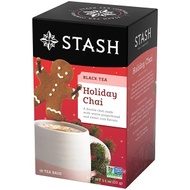 This holiday chai will make you believe in Christmas miracles.

We combined some of the finest types of teas in the world, including a robust Assam and aromatic Darjeeling, to make this special black chai tea. We blended these teas with traditional chai spices like cinnamon, ginger, allspice, and clove… but then we cranked up the holiday cheer to the next level. We added natural flavors of gingerbread, nutmeg, and rum to give this chai a unique, jolly twist that you’d be hard-pressed to find elsewhere.

The most traditional way to drink chai is to brew it up very strong, then add sugar and milk. But when you have a holiday chai tea, you may want to make holiday spirits even brighter by sprinkling some spiced chai tea into everything you do. You’ll be humming your favorite holiday tunes as you cross off things from your to-do list. Your morning chai tea latte? Check. A homemade chai spice bread to impress your family and friends, a chocolatey chai dessert, and a cheerful Christmas-y chai rum cocktail to spread Christmas cheer? Check, check, check.

The Republic of Tea 67

Last year I bought some of this for myself and some for my daughter’s fiancé. Back then he really didn’t do loose leaf much. He loved it! So I sent another box. This year I wanted to send more and couldn’t find it anywhere! Finally, I put out an APB on it and a friend found it at the grocery she goes to. We got him two boxes.

I served this as the final tea of tea party today because it smells like mulled cider – a nice, Christmas-y aroma. For a bagged tea, it is pretty good. The shocking thing is that my daughter who does not like black tea AT ALL liked it and drank two cups! She also loves their White Christmas tea, a peppermint white tea blend that is indeed very soothing.

So today, wonder of wonders, miracle of miracles, eldest daughter drank not one but TWO black teas and preferred them to the white and oolong teas we were serving. She said her beloved may only get one of the boxes of tea because she may keep the other for herself. I guess I had better head back to the grocery and get her some of both of these Stash offerings!

This is mild for a chai, and reminds me of the Russian Friendship Tea as it was called when I was very young – mostly black tea, orange, cinnamon, and clove, but nothing too strong.

(Anybody else having trouble posting new reviews today? I keep getting thrown out.) I just tried this with sugar and half-and-half—fruitcakey, eggnoggy goodness. And this from somebody who isn’t a huge chai fan!

I haven’t had this in years, but you are making me want to go out and get some! I haven’t tried to post a new review today. Will give it a shot later if I have something note worthy.

I haven’t had any trouble posting new reviews, at least not yet. I hope it starts working for you!

This may be unfair to rate since someone from a perfume forum sent this to me a few years ago and I just found it in my mom’s cupboard. It’s old so of course you can’t expect much.

Sure enough it tastes like watery cinnamon water with some weird, almost astringent clove. I’m sure it would have been much better had I enjoyed it when I got it.

A while ago, my mom said, “I don’t want it that way” so now I have the Backstreet Boys in my head.

HA HA HA HA! I will never be able to listen to that song again without laughing!

LOL this made me laugh. I just sang it aloud to my boyfriend, he thinks this tea site is nuts. :D

haha! Love that version of the lyrics!

Hahah. Nicely said, even if it’s in my head!

That is hysterical. Ha.

I just needed to pretend it was autumn, I guess, so I grabbed this for my lunch dessert. Very cookie-y, especially with French vanilla creamer. Cardamom isn’t my favorite chai spice, and there isn’t much in this one, so that’s a plus.

I think this was a goodie-box tuck in from one of you wonderful people, but I can’t remember whom, so … thank you, whomever!

Lol! Glad you enjoyed! My daughter’s BF loves it, too, and I send him a box now and then!

I have been feeling that way a lot lately! COME ON AUTUMN!

It was you! (I’ve started trying to write initials or names on incoming packets so as to give proper credit.)

Drought is so bad here, the trees are dropping leaves like crazy; I have a small sneak preview of what my back yard will look like come early November. (Crispy leaves under your feet aren’t quite as appealing when it’s 98 outside.)

I normally sweeten chais but thought I’d try this without sweetener… (shocking!) I actually enjoy it without the added sweetness. It’s very warming and spicy. I imagine sitting by the fire, reading a good book or playing a good video game with this one.

I wish they sold it loose around here. I just sent a box to my daughter’s boyfriend In Ireland and he loves it!

I think that KeenTeaThyme send me a bag of this tea … THANKS!

this is not a bad chai … although I’ve definitely had better. Very clove-y. I’m enjoying it. The black tea is fairly mellow, the spices are very pleasant and warm.

This… is not what I was hoping for. I remember the Stash Chai actually being half decent. Comforting with milk and sugar.

This? Umm, no. It’s really cinnamony, I can smell and taste the rum flavour (and it’s an alcohol based flavour too!), and there’s lots of clove.

If it were all I had, I’d totally drink it. However, I have loads more amazing versions of chai in my cupboard, so I’m going to dump this and make something else.

One week ago I began drinking this tea, as I have done for several years after Thanksgiving. I do have the teabag version, and occasionally I order teabags for their simplicity and convenience.

This is a delicious Holiday blend, even though I can’t taste the black tea. Normally I would mind, but I consider this an exception and a good dessert tea. Predominant aromas and flavors are cinnamon, allspice, clove, and nutmeg. I don’t really smell or taste the ginger root or the rum flavoring, but that doesn’t mean the don’t have an influence in the aroma and flavor. I just can’t detect them and rather than over focussing on details, the enjoyment of tea is important.

Drinking this tea is like drinking pumpkin pie gingerbread cookies. Good, solid tastes on the tongue that linger. I like to add a drop of skim milk once in a while, just to mix it up a little…….sounds dangerous huh?! :)) Anywho, there you have it…oh, I brew it 5 to 8+ minutes. A very satisfying Holiday Chai.

Boiling 7 min, 0 sec
Yours I Like This
8 likes
0 comments
Edit

I was excited to see this back on the shelves at my local grocery store! While I am a sucker for seasonally themed teas, this one is simply delicious. I steeped it a bit long, then added sugar and soymilk. The rum flavor is excellent, and the spices are a little more subtle. I’m happy to have this tea back in my cabinet!

Study study study! This class is keeping me busy and tea is keeping me going. I have a couple of bags of this that I haven’t tried, and I was looking for something to brew up quick so I could get back to studying. I added some milk to it, and I really liked it! A nice spicy chai. Probably one of my more favorite of the bagged chais that I have tried. Even better than some weak loose leaf chais honestly.

I tried this one last night, with a tbs. of honey. Stash sent it free with purchase, and I must say that I wouldn’t have bought it by choice. Why? Because of the list of ingredients. Rum and I aren’t friends…and I don’t like gingerbread flavors.

This is the bagged version. I found it to be weak overall. And as expected, I didn’t like the flavorings. I’m not going to downgrade it based on personal taste, but overall it was a very weak brew.