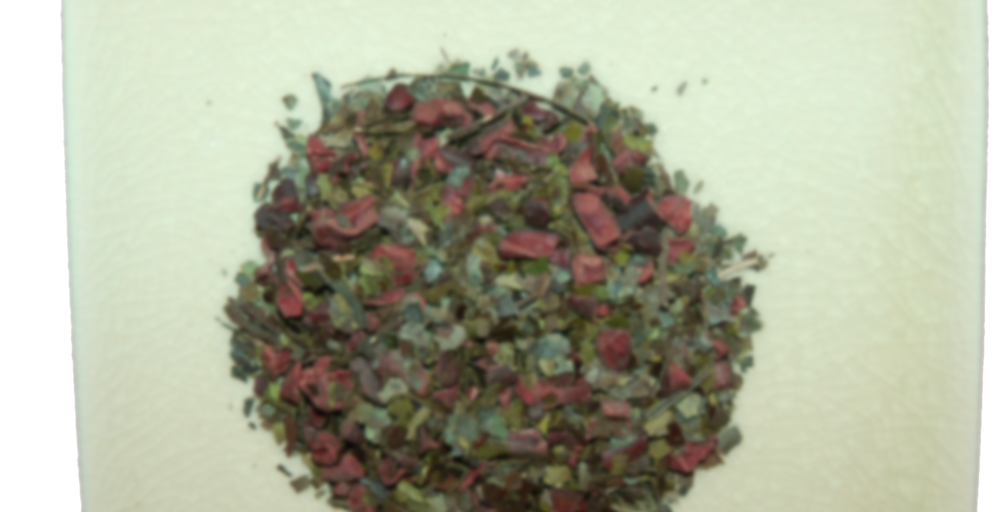 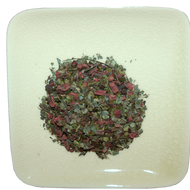 In this signature blend, velvety cocoa nibs combine with refreshing Guayusa for a dessert-like tea that’s rich and stimulating.

Backlog: I like this one a whole lot. I got to try the bagged version, but, it makes me want to get some of the loose leaf. It is chocolatey and rich and yummy. Good level of chocolate, the Guayusa is rich and stimulating. This is something I’d be happy to wake up to every day.

Incredible aroma of earth and cocoa and the faintest whiff of tobacco when I ripped open the bag. Using 1 TB for a 10oz cup, in a tea-sac, steeping 7 minutes — they recommend 4 to 7 minutes “or more for a darker brew” — boiling water …

At the 5-minute mark, gives off a scent of straw — clean straw. And earth.

Brews quite dark, looking like a pu’erh, if pu’erh released green and brown instead of red and brown colours.

Not grassy like some yerba mates. (Mate and guayusa are cousins, both members of the holly family.) Reminds me a bit of some barkier medicinal tisanes with chicory or dandelion root in them. A slight sharpness to the aroma makes me expect bitterness, but I don’t get any. (I’m trying this first cup unsweetened.) Shares the slight nuttiness of some of the Japanese greens. Smooth if mild cocoa aftertaste; this might come out more with stevia.

I need more time with guayusa. But I’m definitely not sorry I tried it.

Will report later on the promised steady no-crash energy guayusa is supposed to deliver.

Boiling 7 min, 0 sec
Yours I Like This
8 likes
3 comments
Edit

Still stoked and focused from the guayusa. Nor manic crazy or anything, but concentration seems better.

Trying it this morning with one packet of stevia, which does not see to sweeten the entire brew, just bring out the cocoa a bit more.

Wow. Quite the steady smoulder of energy. I didn’t dare drink this and yerba mate within the same few hours.

Mmm. Tasty, slightly vegetal but with chocolate notes. I know that sounds strange, but it actually works, and works well. I agree with the other posters about the “straw” and “earthy” qualities. Nice stuff.

I’ll confess this wasn’t a combination that sounded appetizing. I liked guayusa by itself just fine, but the only flavor I thought it could blend well with was citrus. With a lemony lean, maybe. I put this on the back-burner because I thought they used chocolate flavoring for it. Turns out I was wrong; cocoa nibs were used in place of an agent. That sounded more up my alley. While it isn’t as successful as come orange or lemon-blended guayusa fusions, it has a character that works. The normal, leafy kick the holly has on the forefront is masked by the nibs’ unsweetened chocolaty presence, which later gives way to the base’s natural sweetness. The combination works for the most part. It doesn’t quite replace a mocha, but it gives a “tea”-totaler an alternative.

After steeping and straining the tea into my cup,, the liquid smells of straw, and earth. The brew itself is very dark, which reminded me of a puerh tea. But the liquor color was more brown and less reddish brown, which is common in puerh teas.The cocoa nibs that are found in the dry tea, have melted into the tea liquor, creating a very chocolate-y aroma paired with the straw/earth aroma.

Check out my blog for a more in depth review! http://wp.me/sQxcK-595

I have a thing for chocolate teas and this one is by far my favorite. I think I like it even more than chocolate pu erh tea. Maybe. All in all I think this a great tea to start your morning off without jitters.