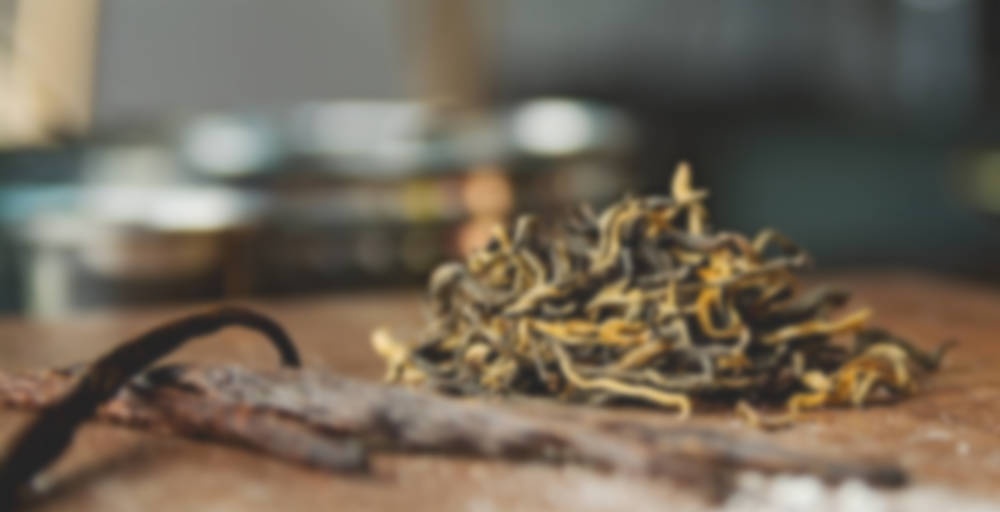 by Soleil Tea
84
You

Soleil reinvents the “plain vanilla” black tea with our luxurious Yunnan Gold and pure vanilla extract. We hand craft our extract with extra fancy Madagascar Bourbon Vanilla beans and age them for 60 days. The decadent fragrance of vanilla weds with the rich and malty Yunnan Gold to celebrate the timeless appeal of a classic blend. Velvety and creamy, Casablanca exudes subtle notes of fresh orchid and honey. Discrete scent of vanilla highlights the distinguished cocoa bouquet of Yunnan Gold without cloying sweetness. Now hop on a vanilla bean and set sail to the distant shores!

Oh this is just what The Doctor ordered. That’s right, The Doctor. I’ve got the Russel T. Davies era on in the background while I work, and I needed something sweet and understated, so no Mexican Wedding Cookie for me today.

The base is smooth, with no bitterness or astringency. Which is great, because the teas I’ve been drinking lately have all been coming out REALLY bitter, so it’s nice to know that I am still physically capable of making a cup of tea. This is the first tea that I’ve come across with a natural cocoa flavor, and I have to say that I am loving it. It’s warm and a little cinnamony in a way that reminds me of Mexican chocolate. There’s just a touch of maltiness that reminds me of a milkshake, but make no mistake, this tea is nothing like a milkshake.

Then there’s the vanilla. It’s so simple, and you can tell that it’s really nice vanilla.

It’s out of stock now, but I hope it comes back. This is something I want to keep in my cabinet.

Edit: On a third brew (my dad took the second) the vanilla is pretty much gone, but it’s all chocolate sweet goodness from here on out. Would it be sacrilege to make this into an ice cream?

Yunnan black teas change your perception of black teas altogether. OR that was just my biased opinion lol.

My world will never be the same again, that’s for sure. This entire experience beyond Twinings has been eye opening, but this higher end stuff is blowing my mind to what tea is.

I received an order from this company who is new for me. I was impressed with the packaging and the personal note included. Shipping was very fast. Also a discount offer on my next order. I received a free sample of a new tea called Van Dyke that I’m anxious to try. This Yunnan gold had beautiful colored dryed leaves. The smell was fantastic!! Cocoa, malty, and lovely vanilla! I drank it western style and was not disappointed! I have been looking for something for a replacement for WP Golden Orchid since they have been out for a while. I’m so glad I ordered a few more of Soleil’s teas. Wonderful tea and happy with this companies service