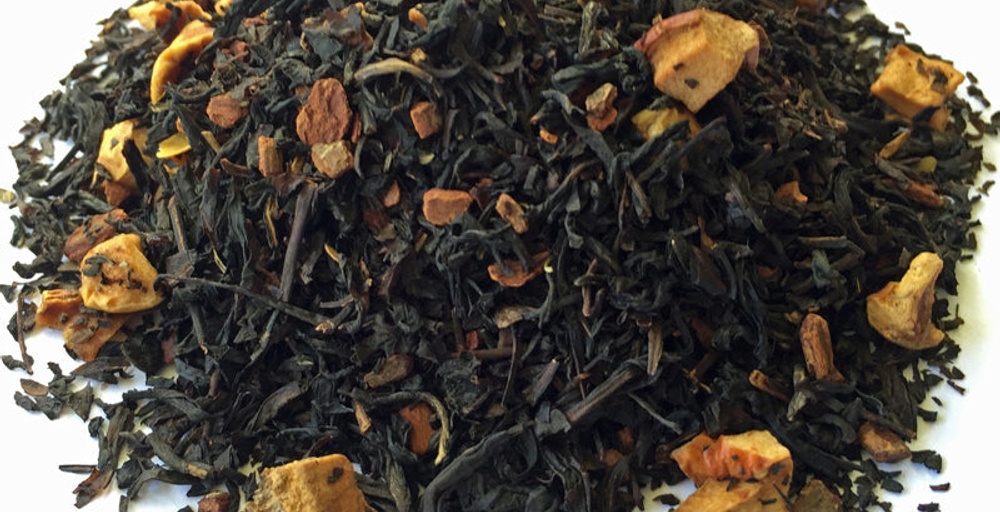 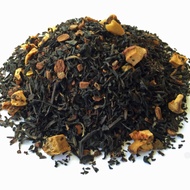 Apple and cinnamon goodness with a hint of maple flavor. The aroma is pure lazy Sunday morning. Breakfast on the griddle, hot tea in your hand, your favorite book waiting to be read. The sweet apple and the heady cinnamon flavors dance on your tongue, while the rich maple taste offers the base note in this amber colored cup.

Based on the high reviews here, I did this as a sample with my recent semi-large S&V Order. I also tossed in Apple Cinnamon Coffeecake, but have not tried that one yet.

This one does apples well, and I never say that lightly, as in many companies blends apples are mainly a feature advertised and a pretty tea visual but without much flavor. This time the mild and fresh taste of crisp apples is actually present, and it’s not false.

I started with 3 minute steep, but adjusted after taste to brew another two minutes.

The tea and toast flavor come through very well as lukewarm stage too. It’s a light and fun fall tea – I did not eat any breakfast or brunch with it so almost feel like I cheated, but I so rarely have french toast I think it’s been like 10 years – at least I can have it a bit in the tea, even though I’m not getting as much of the toast, but instead more of the apples.

I will see if that changes with other brews. Wondering if this will be good with a touch of maple syrup sweetener too.

I wanted to try some more of the new teas from CameronB and I knew we had a cinnamon raisin bagel and thought this would be perfect with it. My brain had done a mash up of the names of two of the teas together and I thought I was making something called Apple Cinnamon Chai rather than Apple Cinnamon French Toast. (Another tea sent was the herbal Apple Pie Chai)

When Ashman walked in the kitchen, he said, “I smell maple syrup.”

This was not a good thing to hear. He dislikes the smell of maple syrup because he says that when the children were little, they would sometimes eat waffles with maple syrup and no matter how we scrubbed them the smell remained, leading to his current dislike of said aroma.

Surprisingly, he liked this tea! A lot, in fact. He said it was sharp and a little biting to him plain, but that sugar smoothed it out so much that he didn’t even need to add milk. There are very few black teas that he likes plain, so I had sugar already on the table for him.

I drank it plain, and it is sharp enough that I thought there must be a little clove or ginger in it, but there is no mention of either unless it is part of the “apple cinnamon French toast flavoring”. I was not tempted to add anything to it to smooth it, as it went really well with our simple breakfast. It is probably just a sharper cinnamon in use, because Penzey’s Vietnamese Cinnamon is quite sharp and bold like this.

The aroma is so powerful with this tea. I can easily see it becoming a winter morning comfort craving.

Thank you so much, CameronB!

interesting as I am looking for another Maple tea, and I do like Simpson and Vail’s Poe tea quite a bit.

I am really enjoying Carrot Cake Cupcake as a caffeine free option, too, especially since I read the hint to slightly overleaf some of their dessert blends.

Simpson & Vail is so underrated IMO!

I just did a large sampler order, now no more personal orders to indulge myself for rest of year, geez.
Figured I could do samplers of this before advent time.

I will say I dislike a lot of their website too, kind of buggy – same with harney and son’s horrible new cart/points design. It’s like websites are going to opposite direction

Some of you may know that my tea preference skews heavily to unflavored, loose leaf teas. I only buy flavored teas as teabags for the convenience. But I am always open to trying anything that lands in my hands through the generosity of others <3

This is a dead ringer for apple cinnamon french toast. It’s really amazing how this company has nailed the aroma and flavor. It’s a little strong with the maple syrup flavoring and cinnamon but definitely not cloying. The apple shines bright as a warm skillet apples kind of flavor. There’s the slightly eggy and bready french toast taste. All of it is there and harmonious.

The base black tea is weak. Like Simpson & Vail’s Almond Sugar Cookie, the flavoring is really kind of mind-blowing but I want so much more from the base, some underlying complexity, some texture. I like nuance and mouthfeel. A lot. And flavored teas typically use cheap bases that produce thin, one-dimensional brews as the experience delivery vehicle.

Very much recommended for accurately capturing the namesake of the tea! Even for somebody like me who is pretty much turned off by maple syrup flavoring. When Kiki comes back from housesitting in several weeks, I’ll get her impression. Like me, she’s not a fan of maple flavor since it’s so cloying but I hope she is pleasantly surprised. Thank you for the sample, Cameron :)

Good observation—in lot of flavored teas, even the superbly flavored ones, the base isn’t much more than a delivery mechanism.

I got Tea Mail from Shae! Yay!
This tea smells awesome, as if I’ve just been in the kitchen cooking apples and cinnamon, with a good whiff of maple syrup too. As for the taste, I’m wondering if I used enough leaf because I find myself wanting more, more cinnamon or more apple or more both. The maple syrup is quite tasty but its suffering from my mental comparison to Cuppa Geek’s Morning Waffles. I’ll try again with more leaf and less water and I’ll add a sample to my next S&V order to experiment with. Thanks Shae for sharing this yummy tea.

Another fun one from S&V, courtesy of Cameron!

The tea is very much matched to the name, which is awesome. The scent is very reminiscent of French toast with syrup. The syrup flavour isn’t my favourite, sadly (in any tea, not just S&V). I am definitely an outsider with my thoughts on this one, but Lex at least agreed with me haha, but did say it tasted exactly like a sweet, syrup-y French toast tea!

More for me! XD

Hahah yes! I wonder if this was partly user error, but alas!

Well if you don’t like that pancake syrup flavor in tea, I’m not surprised.

I felt the same about Cookie Butter from Deb. And there’s been another one recently too (I’ve tried so many new teas…oh! Mornin’ Waffles from Cuppa Geek haha)

Discovery Advent Tea #25
FRENCH TOAST! Not bad for a sweet tea. Reminds me of the one I used to sell through that dreaded Tea Queens company…

Finished off the single serving that was in the box, and it was very good.

Definitely reminded me of French Toast – the good brioche kind! Sweet with maple and brown sugar notes, the perfect amount of warming cinnamon and a kiss of sweet apple. This is a tea that I would totally want in my cupboard for a decadent fall/autumn type of sweet flavour profile!

I did a search of my cupboard and realized that I don’t own any French teas! No teas from a French company or anything that could be considered French. In desperation, I found this tea. It isn’t French, but it does have French in the title so I’m using it! A quick Google search tells me that French toast did not originate in France (I thought it probably didn’t), but instead came about in Rome. And down the rabbit hole I went. I did enjoy sipping on this tea though while learning about the origins of French toast. The aroma is remarkably spot on.

This is a tea I snagged a sample from in the Discovery Teabox, so thank you Skysamurai for organizing and all participants for sharing their tea! I’ve been craving apple cinnamon flavors lately, and recently restocked pretty much the one Stash tea I like, Cinnamon Apple Chamomile which I’ve been drinking a lot in the evenings.

This really does smell like an apple cinnamon pastry from the aroma; it has that overly-sweet apple filling smell that I get from those little finger danishes that have the hard sugar on top. The flavor isn’t quite as strong as I’d like, but I only saved 2.5g from the teabox and lately I’ve been brewing my blacks closer to 3g in the morning, but it is still very nice; I’m definitely getting a sweet cinnamon note, and an apple flavor that is more akin to sweet filling than tart, juicy fruit. There is a subtle warm baked bread note coming through from the black tea, as well as malt and spice. Maybe just a very, very subtle smokiness at the back of the tongue as well, in the aftertaste. It is very warm and satisfying and I’m enjoying it very much as my morning cuppa.

Oh this one sounds good!

This one is probably my favorite from Simpson & Vail and I have MANY favorites from S&V.

I finished my thermos this morning so fast I had pretty much no tea by the time I got to work!

I definitely regret not ordering some more of this when I restocked some of my favorites from them recently. This one is so good.

The first time I tried it Cameron B. sent me some. Ah, I got to try this again. Thank you TeaSipper! Lightly cinnamon, just the right amount. I love Cinnamon but not overly done cinnamon that it masks all the other flavors. This was just right. Freshly baked apple hints, french toast, maple goodness, buttery, bready… And not overly sweet at all. Nice balance. This time I tried it was a splash of heavy cream. Oh my, a delicious breakfast for me today hehe.

OH didn’t know you tried this one yet. I try to convert anyone and everyone to this one. :D

I really loved it with the cream, tea-sipper!