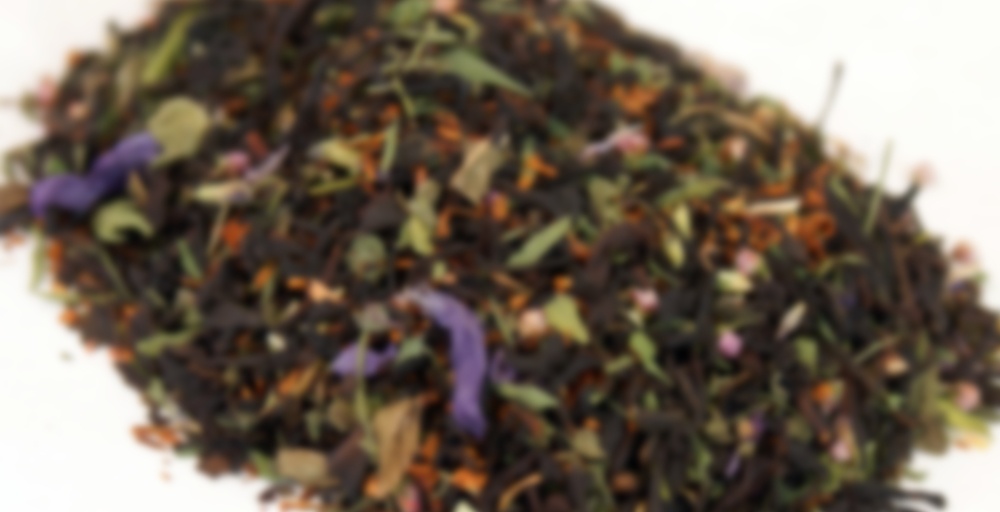 This blend of tea and herbs was created to capture the tastes and treats of the winter holiday season. It is a magnificent blend of black teas, rooibos and peppermint that has been delicately scented with vanilla and vanilla pieces. This Holiday Blend tea will enliven all of your holiday festivities.

I really thought I sampled and logged this already but I’m thinking it was a straight-black base with flavoring instead of a black/herbal blend. I remember really enjoying that other one. This one is pretty good, too, but not as drawing for me…I think it was because of the minty notes being more intense in the other one. This one is not as flavored. It taste more herbally. The black tea base isn’t as pronounced. Perhaps this one is a more laid-back version. I can understand why – I know some people don’t care for mint and most people don’t like mint as much as I do so I totally understand this flavoring. It lingers nicely. Just a hint of freshness. This is pretty good!

Another teaboxB blend! thanks everyone! And another chocolate mint blend I’m sure to love. And I do! The mint and chocolate share equal stage time. The black tea base is nice, as all of the Simpson & Vail teas I’ve tried are. There is rooibos in this blend I was worried about (though I once said I wish there were MORE rooibos/black tea blends) but the rooibos doesn’t seem to be noticeable. My favorite part of this blend is the tiniest little flowers that I haven’t seen in any tea before!

I’m just reading the description right now and it seems like there is vanilla and not chocolate. However did I taste chocolate?!?!

Smells of peppermint. A pretty blend. The red and green does indeed look holiday-ey.

I don’t get any vanilla, though. Thankfully, I also get no rooibos. :) I was a bit nervous about ordering this because of the rooibos inclusion. While I like this, it won’t be a reorder. If I could taste the vanilla and peppermint both, I might. This is a decent black tea base.

This is going to get very confusing with notes from three different dates when I post all the notes in December, LOL! My apologies in advance!

This is a pretty tasty tea, and it’s nice to have a holiday tea that doesn’t have clove, cinnamon, or orange in it. The black tea is light enough that I can’t taste it next to the other flavors, which is a bit of a shame. I question the addition of red rooibos, but I suppose its woody flavor does go well with the vanilla. The peppermint is herbaceous but it’s not musty and it does have a nice, refreshing flavor.

All in all, this is a perfectly nice vanilla and mint black tea. I do like it better than the David’s version. But I do feel it could be improved by using mint flavoring or extract instead of the herbal peppermint. That would give it more of a candy-cane-esque flavor, similar to their Candy Cane Green Rooibos tea. I also can’t really tell that it’s a black tea base.

A sample of this tea came my way for review, and while I did enjoy it I found it quite surprising. The black base is very light, and so the peppermint and floral notes take the forefront. It’s an undercover black tea, and a nice way to enjoy the flavor of an herbal with a kick of caffeine.﻿

You can see the full review at:
http://wordsabouttea.blogspot.com/2014/07/holiday-blend-by-simpson-vail.html