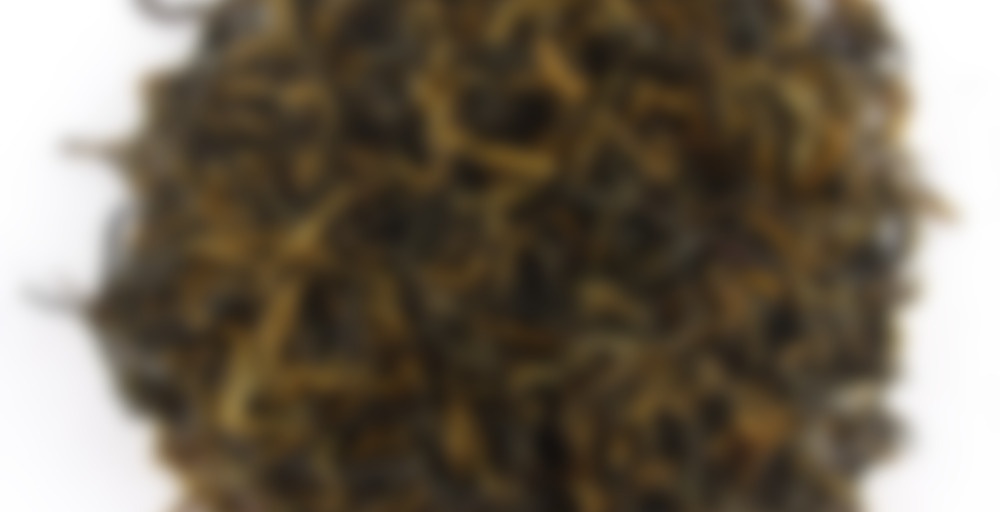 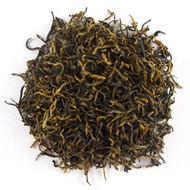 by Silk Road Teas
88
You

Our Monkey has everything a high–grade Fujian black tea should offer. Careful plucking of leaf and bud, followed by able processing yields a blend of short dark leaves flecked with golden buds. A full–bodied cup offering rich flavors of malt and a wonderful fragrance. This tea can take milk and sugar. Use 2-3 grams of leaf and steep for 2–3 minutes in water just under boiling.

Tried it with boiling water, and a short steep, and it is much more tastier. Actually, I didn’t choose to do that. My utiliTea thermostat is flaky again. But it did bring out a more malty flavor.

Thanks to SoccerMom for this sample! I first sampled this last night and immediately thought it was a bolder, richer version of the Adagio version. Then this AM, I broke personal protocol, and tried Adagio’s GM (instead of my usual brisk breakfast) as a comparison and I was still leaning towards the Silk Roads version.

So finally, I did a side-by-side taste test of Golden Monkey from Adagio vs this one. And this one wins “by a nose”. The Silk Roads GM tea brews up a darker color and has a slightly bolder flavor. It is naturally sweet, no astringency, very smooth, not pariciularly smoky, not peppery…

Thanks for the comparison :)

ooh i love adagio’s gm, but now i need to try this!

Strangely enough I am REALLY enjoying this tea tonight. The first time I tried it I could tell it was a high quality tea but I just wasn’t much of a fan, it being a black tea and all. (It was in a sampler I ordered). I thought I would give it another try. Im glad I did! I can’t find the words to describe it much, other than cocoa; zero bitterness, sweet aroma. Finally giving this one a rating!

This was a very surprising black tea. I sort of expecting something with the earthy characteristics of a Dian Hong but got something more in line with a Nepalese black; a very creamy, caramel-like, and nutty brew with no dryness or bitterness. Definitely one worth a revisit.

I’ve been screwing around with this tea a lot lately, trying to bend it to my will. It has beautiful leaves, great liquor clarity, exhibits a good range of flavors, has a decent balance of body and liveliness, and produces a very distinct flavor set some people may adore… I’m just not a huge fan of some of the characteristics it possesses. I can’t justify rating it as a simply “okay” tea or as though it is “lesser-than” some of the teas I love, though, because of the steadfast, clear flavors and aromatics it produces.

What I dislike is a fairly heady, almost-overripe dried fruit aroma/nose that is reminiscent of what I get from certain Sonoma Valley Chardonnays. Also, there is a flavor that reminds me of the smell of old glue that has failed over the years to hold the spine of an old book – to me it tastes a bit like the air of my local public library. Tweak these characteristics a bit more to the grapey side, and you’d wind up with a nice, somewhat woody Darjeeling-like character. Tweak ‘em a bit to the malt side and you’d have a fruited and elegant Assam characteristic. Where it stands, I’m not particularly fond of it… I’m sure there are folks who’d fall head over heels about it, though. A rinse lowers these tones a bit out of the almost-cloying range into base characteristics of the nose.

Aside from these bits, it’s a very pleasant, approachable light Chinese red. Medium body feels like it ought to be a bit heavier to accommodate the flavors that are expressed, but this is a trait I’m used to in Fujian reds as a whole. Liquor color is a stunning deep red orange like the color of recently made bricks. Plucking standard is pretty darn uniform and comprised exclusively of young, intact leaves and buds (plus a small twig here and there). Torn leaves are still young and the sizing conforms to the length of the rest of the material.

Unlike the dried apricot fruit notes of many other Golden Monkey reds (and inherent in the dry fragrance of four others I tasted along side this in a cupping earlier) this one exhibits more of a white nectarine skin fragrance alongside the wood and cocoa. Wet aroma brings out the aforementioned chardonnay note with more of a wet cocoa powder characteristic. The overarching characteristic of the liquor aroma is malt.

Cocoa jumps forward in the flavor, though it isn’t an exceptionally chocolatey tea. Interestingly, I get a good amount of rose and rosebush foliage notes in the flavor and aftertaste/afteraroma. Very ripe white peach hangs around as a dull perfume both in the cup and transferred from the mouth up into the sinuses for a double-dose (fortunately, it isn’t intense or pervasive). Drinking from a gaiwan using a rinse and 4g per 115ml in 90 degrees C water, mostly malty and woody flavors run through the bulk of the flavor. In cupping with 2.5g per 125ml water just off a boil (5 min steep) I get more cinnamon raisin bread as a base and a primary high note of ripe stonefruit peel (again, white peach/nectarine or maybe even pluot skin). Leaves a crisp impression and very faint sweetness to the breath hanging deep in the throat like that of chewing a bit of dry oak wood (little less grassy than a typical toothpick or stir stick). Nose is mostly floral with those light cocoa notes but there is a base of wet clay and malt serving as a backbone and rounding it out.

Overall, very approachable and smooth. Not a ton setting it apart as a red tea, but a distinct step in flavor clarity above many of this group of teas. When cupped alongside four Golden Monkeys sold by Plymouth Tea Company, this one stands up with the best tactile balance and has the easiest identifiable character to it. Not sure whether it’s the case or not, but it tastes “fresher” despite being the same harvest or older. I suspect the fairly strict plucking standard of very young first flush leaves and relative lacking of broken material is largely responsible for this effect.

Personally, I like the Golden Monkey I bought from Silk Road a few years ago much better, and probably wouldn’t buy this for my personal satisfaction; however, I highly recommend fans of easy-drinking red teas to give this one a try and have no qualms giving this as a gift.

I received a sampler from Silk Road yesterday and let me tell you that this earthy varietal is something special. I did three infusions (gaiwan-style baby!) and the third was still just as lovely as the first. Interestingly, it tasted sweeter after the third infusion. If you fancy yourself to have a sharp tea palate, this one should prove to be quite the challenge as it has several levels of taste experience. I’m going to buy a few pounds of this!

This is by far one of the best black teas I’ve ever tasted.

I really enjoyed this tea. It has a nice malt flavor, which forgave my neglect as I let it steep too long. I will be buying more

Assuming that this Golden Monkey is the higher grade variety that Silk Road offers, this tea is really quite a find. Most gold-bud black teas will have about 20% gold buds; however, this tea is closer to 50/50 on the tea leaves to tea buds front.
I was initially brewing this at 200-boiling, however after accidentally brewing it at 180F I realized the true potential of this tea. The lower brewing temperature allows for more of the soft maltiness of the roasted teabuds to shine through, while not allowing the black tea leaves to oversteep and exude their bittering astringency. As a teadrinker who tends to stray away from black teas, this Golden Monkey is one of a kind in the class of gold-bud teas.

Chewing on a couple dry strands reveals a dusty (sawdust like) crunchy, mellow taste with the slightest hint of bitterness. The cup that follows is similar in taste. This batch had many more golden buds and was much more dusty than my order last March. I’m guessing it was taken from the bottom of the bin while my previous order was probably from the top. I’ve been out of this tea for a couple weeks and the first sip is like sitting down with an old friend. The cup is mellow and smooth with a nice chocolaty flavor that resides on the pallet for some time afterwards. Brewing the cup for 4 min 15 seconds is my preferred length of time. It results in a chocolaty and malty cup with a texture that coats the tongue. I find 4 minutes results in a slight numbing of the tongue (not unlike a sip of coca tea) which steadily fades. That numbness as well as a hint of dried apples is overpowered by a chocolaty, almost coffee like flavor when steeped for 4 min 30 seconds or more. The longer steep also results in a hint of bitterness that isn’t present when steeped for a shorter amount of time. The tea feels strong in both caffeine and theanine. This along with Silk’s White Peony I prefer to keep continuously stocked. These two along with Mi Xian Black and Caramel Assam by Butiki are by far the best teas to dance with these taste receptors. My first order of a few pounds came with a free gaiwan and a few tasting cups. This act of kindness has resulted in me becoming a life-long customer. With a tea like GM (Jin Hou) it makes that easy. By far, one of the best teas from Silk I’ve had the pleasure of tasting and one I could easily drink for life.