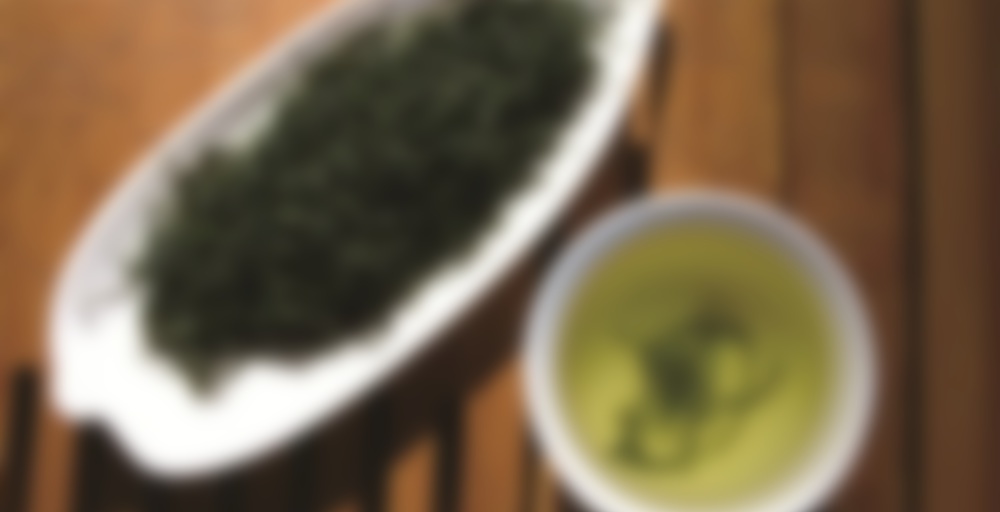 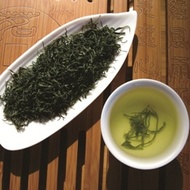 Like sunlight sparkling through leaves, refreshing bright clear green cup with strong flavor and crisp finish. This tea was grown in the misty billows of a 2700ft mountaintop.

The very small and tender leaves create a sweet and very “green” flavor. Compared to other green teas, Our High Mountain Green Tea is slightly sweeter and milder.

Finishing off the rest of the sample this morning. I thought this was a very mild and gentle green tea. Like all of Shang’s teas there seems to be something elegant and relaxing about it, I don’t know how do they do that!

Seriously contemplating an order, it’s good to have some gentle green teas on hand for those days I’m feeling oooooky.

Another one from the sampler pack. The leaves are dark green and have a wonderful vegetal aroma similar to spinach. The wet leaves have a higher aroma with notes of butter and brussel sprouts. I brewed this one in my 12oz mug, again being too lazy to brew gaiwan style.

I happened to be starting the computer up as I started to brew this and so I had left it brew for much too long making the first infusion very bitter. I added some honey hoping to make amends, but to no avail. But through the bitterness I could taste a nice creamy, buttery, vegetal green tea with hints of corn. I could tell this would have been an awesome tea had I not royally screwed it up.

So, I poured out the first infusion and made a second. Even after having the first one sit for at least 4 minutes the second infusion still had plenty of flavor in it! Here I could taste the wonderful creamy, vegetal green tea without any bitterness. The flavor was a bit muted simply because of the long steep time in the first time around.

This tea holds up surprisingly well, I bet you could get quite a few good infusions out of it…dare I say you could get 5??? Even through my mishap this still turned out to be really good.

I love Shang tea – need more in my stash! Someday I will have my stash all worked out to only my favorites – Shang WILL be in there – I am still having too much fun tramping around tea world.

Same here, still doing a lot of sampling. Shang does have some really nice teas!

Ha- that’s what I’ve been doing for the last year. There seem to be no shortage of new tea companies but I do have a few faves.

Picked this up the other day, but for whatever reason haven’t starting drinking it yet. Yum. It’s lovely stuff. Nice, mellow, yummy green tea.

Sorry I’m not more descriptive or pithy – I’ve got a cold coming on.

Sample Week continues with a hastily chosen random sample of randomness. It was literally then topmost one in the basket.

I have a tendency to prefer Japanese greens, or greens that are similar to Japanese greens. Therefore, I’m feeling slightly wary of this. Because as far as I can tell, it’s not Japanese. Chinese greens are bit touch and go. I’ve never met one that I absolutely didn’t like and I’ve met plenty that I do like, but there is just such a large group of green Chinese teas that I can’t feel more than indifferent about. (Unless they’re flavoured, but that’s a whole other crate of fish)

There’s something I want to watch on tv soonish, so considering the amount of time it usually takes me to write these posts, I’ll try to be brief.

The aroma is, in quick summary, not particularly strong, quite ‘thick’ in character, and it has a strong note of fresh greenery. Not grassy as such, but leaning in that direction. It seems slightly salty as well, but again not particularly much. Not enough to put my off at all.

The flavour rather reminds me of Dragonwell. It’s got that same sort of boiled spinach-y kind of note to it. Again, the same greenery note from before, I think. Funny thing is it tastes exactly like it smells. I could just repeat verbatim what I wrote about the aroma and it would be true.

It’s not that very strong in flavour, not nearly as strong as Dragonwells are, and it’s a bit like taking a sip and then having to pass through some sort of curtain of hot water before getting to the flavour. It’s very smooth, and quite ‘thick’, a fat flavour, but not a buttery one. Although I think this is the character that people think about when they say a green has a buttery note. For me, though, it has to be a lot stronger before I’ll call it buttery.

This is a friendly cup. It doesn’t demand a lot from the drinker and it doesn’t attack and overwhelm the mouth completely. It just compliantly sits there in the cup, waiting to be sipped and doesn’t require a whole lot of attention in order to be enjoyed. It’s the sort of tea that would go quite well along with reading a book or watching something on tv.

Speaking of which, I seem to have written this post in record time and now have 15 whole minutes before my program actually begins. Zoooooom!

Really good green tea. The leaves are beautiful, dark twisted green leaves that brew up a gentle cup of sweet green tea with no bitterness and a slight buttery flavor.

At first sniff it smelled like spinach. A very vegetal smell and taste. Lovely delicate green color. Not bitter at all. Very wet and quenching. I am not horribly fond of green teas, but this one seems to be pretty high quality. If you like light, vegetal flavors you’ll love this tea. My rating is based on the quality of the tea, not whether or not I liked it or will buy it again. Greens just aren’t my cuppa. :)

This tea has a rich broth-like smell that reminds me of Miso soup. It also has a slight toasted flavor but a very creamy body.

Steeped this one six times today, and it was delicious every time!

Awesome green, hot or iced. Not too grassy, just right!

This is one of the first teas I ever bought from Shang. I love it. It is a soft gentle green tea that I can’t screw up. It very rarely turns bitter, yet offers the yummy sweet vegital flavors. A calming elegant tea.