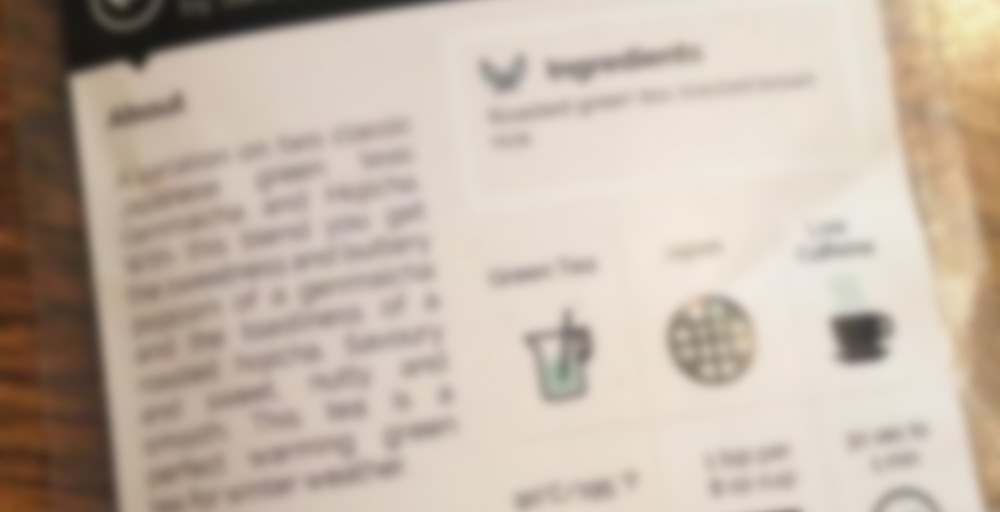 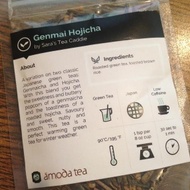 by Sara's Tea Caddie
79
You

A variation on two classic Japanese green teas: Genmaicha and Hojicha. With this blend you get the sweetness and buttery popcorn of a genmaicha and the toastiness of a roasted hojicha. Savoury and sweet, nutty and smooth. This tea is a perfect warming green tea for winter weather.

So long tasty genmaicha. This is one of the better genmaichas I have tried and if I did not have Japon I might have felt compelled to stock up on it. Thank you Cavocorax for introducing me to this tea.

Look at you with the crazy sipdown progress!

can’t let her catch up to meeeee haha

I have sipdown skills! Although, aside from a couple of caffeine free teas, I have used up all my one cup samples I had lying around. That means I have to start working on larger samples.

And Sil, I plan to reach at least 160 by the end of tonight. I am coming for you!

This is an interesting tea that I probably would never have tried on my own, but am happy to have had stumble into my path.

I remember having genmaicha over a year ago and enjoying it, but not enough to drink it over my favourite black teas. I don’t know what it is about this one that makes it different, but I really enjoyed this one. The soft buttery notes and the strong toastiness are such a great combo. I immediately re-steeped this after I drank it, and then gave 1/3 of that cup to my demanding daughter who walked around with it in her bottle for a bit before she drank it all.

I’ll have to check out Sara’s Tea Caddie in the spring once I feel even more like drinking green teas!

Oooh, thanks for the offer, but I think I’m ok. I’ve actually had both of those. I do remember liking Nina’s Japon. Thanks for reminding me it’s out there!

And I did like the Marshmallow Genmaicha sample, but the last time I ordered flavoured Genmaicha from 52 Teas it was lacking somehow and not worth the price of shipping etc. :\ I’m nervous about trying again.

IDK what it was with this but this Genmai Hojicha, but it was good. And so simple too. Although I wouldn’t say no to some vanilla and caramel…

haha I have actually been craving the Nina’s Japon since I had it. Luckily I bought a large tin of it so I have lots for me and enough to share. Perhaps I will have some tomorrow now that my taste has seemingly returned :)

Yay for being able to enjoy your tea! And dud you order it from Amazon?

I actually got to go to their office in Miami. They made me a cup there and I ended up buying a large tin from them directly. They also made me a cup of The de Vendome and I bought a tin of that too.

Hopefully I will be able to visit again the next time I am in Florida. It was nice meeting them all and I would love to just go and pick up the teas I liked from them directly. So much easier than having to order online.

Pleasantly surprised to find this in my January Amoda tea box – I’ve discovered that I like hojicha, and I like toasty rice in my tea, and therefore I like this sort of combination. I don’t think this is the first of its kind that I’ve tried (I could be wrong, though), but the flavour was about as expected – sweet, toasty, and ricey. No green-ness. A fairly boring yet flavourful/comforting tea to have with a meal or on its own. (And I only mean boring in the sense that there aren’t as many flavours swirling around, IMO). Anyhow, tasty, and a good pick for a tea box.

I really liked this one, although I didn’t expect to.

Here’s Hoping Traveling Teabox Round #3 – Tea #22
I always wondered what a hojicha/genmaicha would be like! Really, it doesn’t taste all that different. I thought it would be toastier with the popped rice but the hojicha already seems to have that toasty quality. It just tasted like a normal hojicha to me. I wonder what it would taste like split 50/50 with the actual green leaves of a genmaicha….
Steep #1 // 20 min after boiling // 2-3 min
Steep #2 // 15 min after boiling // 2-3 min

Yesterday Kaylee wrote that this tea made her want popcorn. Based on that note, this tea became my “find a tea drinking inspiration from you dashboard” tea.

This is a pretty good Genmaicha. I’m not getting much hojicha, but I agree with Kaylee, it’s a bit like popcorn. A little salty, a little nutty, a bit roasty. I’m going to steep it just a hair less next time, but all in all I like this one.

I missed that “find a tea drinking inspiration from your dashboard” thing… Sounds like a great idea!!

I’ve had genmaicha and I’ve had hojicha, but I’ve never had a blend of the two. The golden brew smells like burnt popcorn. It tastes of toast, rice, and nuts with a touch of sweetness at the end. Not bad, but it’s making me crave real popcorn.

I think I should pull this one out to drink tomorrow – keep taking inspiration from my dashboard. If it makes you crave popcorn – then I’m going to like it. Thanks for the inspiration, off to find where I have this hidden… :))

Glad to be of service!

The more I drink this one the more I taste. Sitting her enjoying this cup I really feel like i should be enjoying sushi with it. In my head I totally am. The seaweed taste is quite strong and the roasted flavor of the toasted rice mixes well. I start to get the sensation of eating sushi rolls. There is no fishy taste, but I think I keep imagining it. When I’ve finished the cup I definitely have the aftertaste of a nice fresh sushi roll in my mouth. It’s really very strange.

thanks for sharing this one with me dexter this one isn’t too shabby but like most genmaicha’s…it tastes like genmaicha to me. neither better, nor worse than any that i’ve had. So a cup i enjoyed drinking but nothing ZOMG MUST have, since i don’t have a lot of room for genmaicha in my cupboard…ok so i room for two. nina’s and verdant’s black one haha

This one is really interesting. It starts out roasty, and I thought that would be all there is to it, but then it moves into a sort of seaweed flavor. That part of it could be overwhelming, but it manages to be smooth. The aftertaste is completely unexpected, but what I taste is cinnamon or nutmeg. It’s a nice, balanced cup that has a lot of flavors in it I wasn’t expecting.

Oh yay! I’m getting closer and closer to being caught up. I mean … I’m almost like … just one month behind now.

This was in January’s amoda box. I was a wee bit disappointed by January’s box, only because December was AWESOME … (February’s is pretty awesome too, for that matter), but in January’s box … they repeated a tea. Not this tea, this is one I hadn’t tried before so I was happy about that … but they did repeat a tea and I don’t want to buy ‘repeat’ samplers. You know? I’m a taster. I’m a sampler. And when I buy a sampler from a company, I want it to be teas that I haven’t tried before.

Anyway, enough of that and on to this tea.

I am very glad that this tea was in January’s box. A delicious Genmai! I love that the roasty-toasty-ness of the toasted rice is accentuated with the roasted Hojicha tea. It makes for a really delicious, deep caramel-y yumm-o sort of taste.

Genmaichas and hojichas are two of my favorite types of teas! I’m definitely putting this on my wishlist to follow up on later.