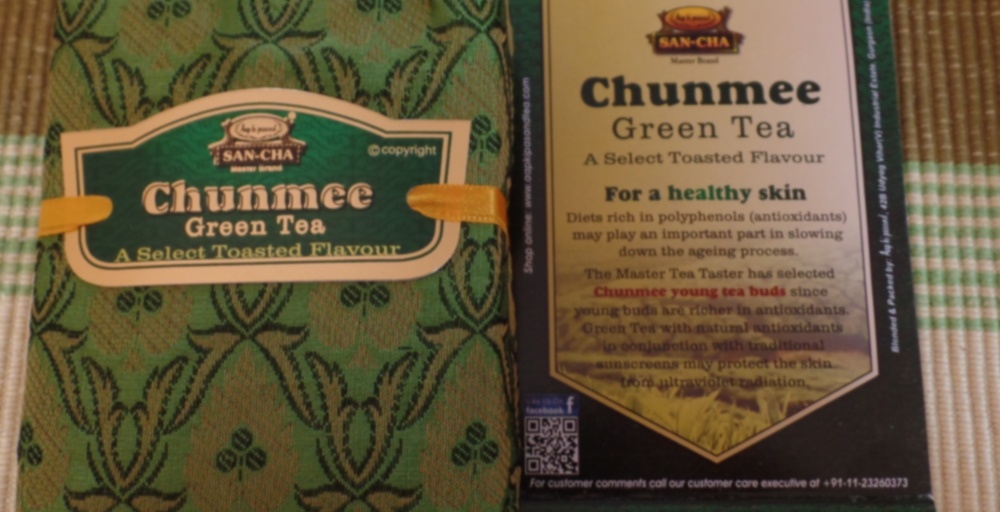 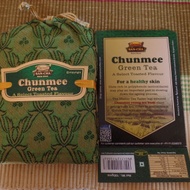 For a healthy skin

This is the second tea I try of the 7 teas my husband brought home from Bangalore.
As I´m not such a green tea fan (I think this might change with these 7 green teas), I wasn´t familiar with the “Chunmee” type. From Wikipedia I read : “It has a dusty appearance and is generally more acidic and less sweet than other green teas. It was originally produced only in the Chinese Jiangxi province, but is nowadays also grown elsewhere. … This ever popular tea has a bright flavor, light tangy sweetness, and a toasty warm clean finish, making it an excellent green tea during the day or night, with a nice well-rounded flavor and aftertaste.” This is thus clearly a Chunmee tea grown in India, and I cannot see the dusty appearance which is mentioned. No, the tea leaves seem bigger than in other green teas I´ve tried. As far as the tasting is concerned, I had the tea steeping for about 2 minutes and found its taste indeed well-rounded without any bitter or too grassy aftertaste, even when you leave the mug unattended for a while and the tea has cooled down when you take your last sips. The grassy aftertaste has always been my worst part of drinking green teas so far and I´m very glad to know there are also green teas which don´t show this.
The package doesn´t give a lot of practical information, but it does says : “For a healthy skin. Diets rich in polyphenols may play an important part in slowing down the ageing process. The Master Tea Taster has selected Chunmee young tea buds since young buds are richer in antioxidants in conjunction with traditional sunscreens may protect the skin from ultraviolet radiation.” I´m quite sceptical about these health claims, but as the tea tastes nice, there´s no reason to drink it only for the possibly healthier skin you might get ;-)