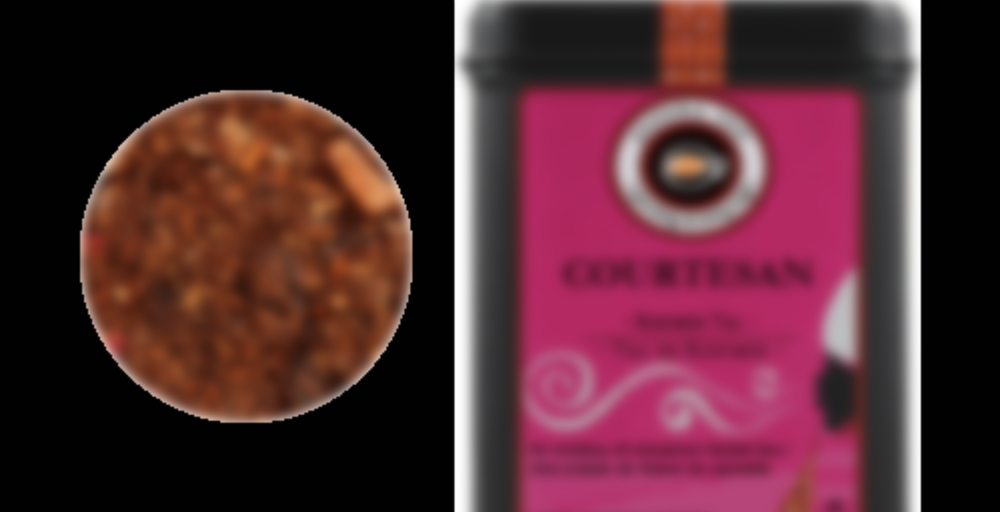 by SAHARA TEA
--
You

Submit to the herbal ecstasy of cinnamon plum tea. The exotic cinnamon mating rooibos and fruits truly make this tea an enjoyable experience.

Thank you yyz for sending this sample my way. I was just reading my tasting note about 100 Mysteries – that note was written 2 months ago and I was talking about cupboard explosion at 188 – it’s actually pretty funny to look back and read that.
This is a lot like 100 Mysteries in that it has a lot of things going on, it’s really strange, and yet somehow I like it. It just sort of grows on you and before you know it, the cup is gone and you are looking for more.
I have no idea what this should taste like. It’s just strange, fruity – dried fruity, a little nutty/woody from the rooibos, a little sweet from the cinnamon. Yep strange, strange in a good way. Happy to have had the experience.

Me either, but I’ve gotten two different samples from two different people – and I liked both of them. yyz’s tasting note says she bought this at Winners…

They’re in the GTA somewhere given their area code. I’ve only seen them at winners but MissB said that they are sold in some stores out west. http://www.saharatea.ca

Dexter, This really does have a lot going on! I really enjoy it’s warm, spicy sweet mix too.

I picked This up on sale at Winner’s today after Dexter’s review of 100 Mysteries last night. I figured it was worth a chance.

It makes a pretty nice tea for the holiday’s. It smells of cinnamon and raisins when dry and once brewed it is a pretty red colour and smells like a Christmas pudding.

It smells strongly of cinnamon, raisins and dried fruit. The taste is pleasant and is less sweet and spicy than it smells. The rooibos is smooth and
disappears in a vanilla like note. The cinnamon and fruit combine with a pastry like notes that remind me of a spicy french toast made with brioche. The rooibos is well hidden, with cinnamon being the dominant flavour and with the fruit underneath. A nice, cinnamon fruit tea for the holidays.

Sounds like a nice combination of notes. After reading all of these reviews, I’m actually glad I didn’t make a trip down to a Winner’s to check out their sale. Sounds dangerous.

Probably a good idea, the one near me still has Fauchon tempting me to buy other flavours. This was a good deal though as it was marked down even further so I got it for $4 so I don’t feel particularly guilty about it.

I’m enjoying the Sahara Tea finds all over the place; they’ve got some unusual pairings that make me think… wait, what am I drinking? Pretty tasty too, once I get over the brain melt. I must have missed this at my Winners though. All I saw was Fauchon.

If you were at Metrotown, I’m pretty sure I didn’t see anything by Sahara today.

I’ve seen them occasionally at Homesence and Winners. They had this one and the Tantric Tulsi. I just picked up this one this time. It’s my first time trying their teas and it was quite nice! I found it in a clearance section. So you might want to check out there if your browsing. I see what you mean about thought provoking blends sometimes though, they do use an interesting mix of ingredients especially in their herbals, I almost wish I bought the Tulsi!

We must keep on running into each other OMGsrsly. It’s like we’re at the same place at the same time, each time! Only place I’ve found Sahara locally is the Low Carb Grocery down on Marine Drive, and they usually carry 6-8 different blends.

Oh, that’s so funny. :) I never go down to Marine Drive because I bus, and the buses down there from my neighbourhood are rather terrible.