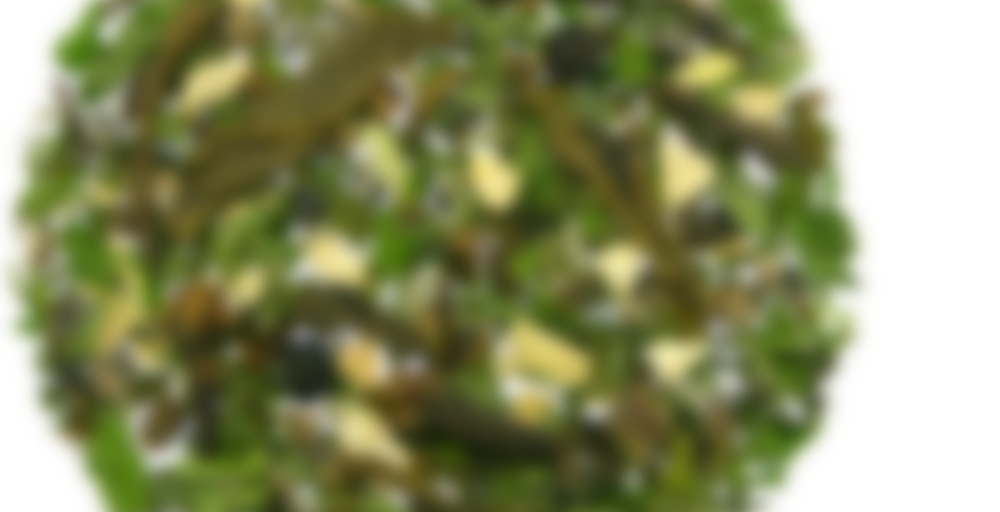 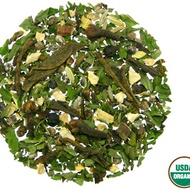 Maghreb Mint, Organic Fair Trade Green Tea Maghreb Mint is one of our first mint blends and it remains one of our most popular. It is exotic with a full-bodied sweetness, bold mint flavor and zesty notes of cardamom, ginger and spices. Maghreb Mint can be infused like tea or boiled North African style with sugar, water and/or prepared with milk like Indian Masala Chai. Made strong and sweetened, this blend soothes the sinuses and throat.

I keep meaning to try this and then forgetting about it’s existence, so I had put it at the very front of my tea cupboard so I would remember it. Naturally, this mostly meant that it fell out every time I opened the cupboard, but today I finally noticed it before anything else.

The list of STUFF in this is a little insane. For a moment I couldn’t find the bit where it actually said “green tea leaves” and was all like “holy crap it’s just mint and spices that usually go in chai! and anise!” But yeah, then I saw it, so…crisis averted!

I was distracted while making this and used water that was too hot, which is kind of a bummer, but I’ll get it right next time! I’m not sure if it’s because of that, but the mint is TOTALLY dominating this tea. To the point where I’m like, is there REALLY other stuff in there? By really concentrating, I can sort of notice a spiciness and a vague sort of sweetness (could be the anise!) around the aftertaste but that is IT.

As the tea cools, I am starting to get more stuff. I’m not entirely sure that I am capable of telling ginger zing apart from mint zing and once you add pepper to the mix you can REALLY forget about it, but there is definitely zing going on, and I’m starting to get other spices as well. The cardamon definitely, and more sweetness. And, oh yes, there is definitely a peppery aftertaste here.

Well, in attempting to analyze the flavors in this cup, I have basically gone through the entire thing without figuring out whether I actually like it or not. (I mean, beyond just being a mint tea and therefore unlikely to be terrible) I know I am DEFINITELY gonna have to try this at the right temperature considering how much it changed as it cooled though. I shall tentatively give it a smiley, because it’s not like I DIDN’T like it.

I have always wanted to try this but now I will cross this one off of my list….Samovar’s Moorish Mint is similar to this one but sounds like the Samovar blend (which I have) is a lot better and the mint does not dominate the other spices….

Not your average mint tea! This one has a nice, sweet zip to it! I definitely taste licorice and ginger in it. A good blend to wake you up.

I’ve been wanting to try this one!

TastyBrew sent a bit of this one over to try. I really appreciate it! I let the water cool a while, as there is supposedly green tea hidden in all of these spices! The first taste was a bit surprising. I don’t think I’ve had chai spices with mint before. The spices and the mint are both equally balanced. It’s very intriguing! The mint is very sweet. The texture is almost creamy somehow, very smooth. The second steep I noticed licorice, so that may have helped the sweet and silky. I guess it had to be at a bit higher temp for the licorice. I didn’t notice much in the way of green tea – it seems like mostly mint and spices. It is different, so I love it!

Happy Halloween everyone! I’ll be sipping some Necessiteas pumpkin cheesecake later (that TastyBrew also sent over). I drank some not too long ago but I’m already wishing I was drinking more.

Hmmm… I’m getting toasted rice and mint… kind of like a mint rice cake. A very interesting combination that I’m glad my husband is enjoying :)

Traveling Tea Box C #20
I totally forgot I had sampled this already from a swap from moraiwe months back. Same as I remember stronger aroma then the taste. It was nice running into this one again. A minty tea with great spices. Nice and relaxing.

Hi!I used to live in Morgan Hill and went to De Anza and San Jose State. Small world! I know there are tea places in San Jose/Cupertino but don’t know about Monterey. How about Pacific Grove?

Ya there’s a plave in monterey and salinas.

There’s ginger in this? And I didn’t even notice?? far out.

Ginger does have its time and place, but when it’s out of place it’s about the worse flavor ever to me.

I am going to leave this tea unrated because I think that it is a good tea for what it’s supposed to be, but it’s not my thing.

I will say, though, that it is the best tea from the teabox so far. I would drink it again if someone offered, but I’d never brew it for myself. The mint, anise, and cinnamon stand out the most. It has a definite spicy bite to it that tickles and burns ever so slightly on the way down and this is why I don’t like it. Same reason I don’t like Winter Fire from Butiki, but the mint in this one makes it more tolerable.

I definitely forgot I stuck this in the fridge yesterday to steep. Oh well. Remembered now!

I think I just love iced peppermint tea, and this, with it’s spices and twang of ginger is to die for. I just need spring to find its way here so I can sit on the patio with this, a little umbrella, and a book. Yep.

hey, waitaminute, i think i am just noticing that steepster doesn’t bring your note to the top of the page if you update it the way it used to. !!!

aww man now all the swap peeps i shared with are gonna miss my notes. i’m gonna have to be much more diligent about updating and notating as i go. in real time.

on that note THANK YOU moraiwe for this soothing gingery minty wondercup!

Oh my goodness I’m in love. As I lean in to take a sip, it smells strongly of tangy ginger. But on first gulp, all the other flavors just slightly pop out. A little peppery, some cardamomishness, then it finishes with a lingering sweet mint on the roof of my mouth. Such a nice spice rack journey from ginger, to chai, to mint. I will have to buy more of this immediately.

I must admit that I love mint teas. This one is up to par to the mint teas I had at the Shuk in Jerusalem. The flavor is bold and rich, not only minty, but almost mint-chai, if something could be called that way. Right now, this one is my favorite mint tea.