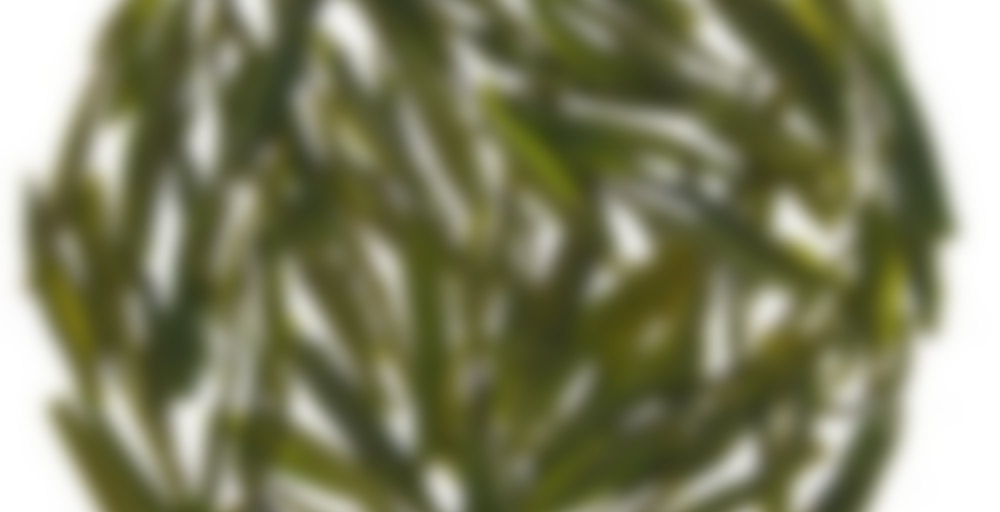 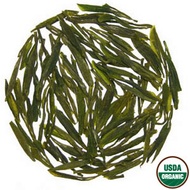 Dragon Well (Long Jing) is the most famous Chinese green tea, named after the Dragon’s Well landmark in the West lake area of the Zhejiang, where the tea originated. Dragon Well is a pan-fired green tea that is flat fried by hand in large woks one small batch at a time according to an artisan processing technique that yields a tea with leaves shaped like the blade of a sword. Each spring, during the prime Dragon Well harvest, we select a unique quality that has a balance of fresh green and smooth toasted flavors. Rishi’s Dragon Well is mellow and smooth with a fresh bittersweet finish and roasted chestnut aroma.

I’m a little behind in trying my Steepster Select teas for this month. This is the first! The theme this month was the “Year of the Dragon” to coincide with the Chinese New Year.

This is a very good Dragon Well, and it represents the first Dragon Well that I tried that I actually liked. Here is my full-length review from a couple of years ago: http://www.teareviewblog.com/?p=3571

Inspired by TeaEqualsBliss, I decided it was time to randomly choose some more teas from my box from LiberTeas! So this is the first of three teas… which I’m drinking while sitting through a series of wicked thunderstorms. (While I was on the bus home, there was a simultaneous crack of thunder/flash of lightning so loud that I thought perhaps we had been hit. It wasn’t us, but must have been extremely close. Scary. As I write this, downpour #3 is occurring. #1 had pea-sized hail; hoping that was all we’ll see of that…)

The only dragonwell I really remember having is Verdant’s, and I’m sure I’ve been spoiled by it, so I have to say that by contrast, the leaves of this tea look a little dull and broken. Luckily, as soon as they were in the water, I was getting a delicious fresh green, rock sugary scent that did make me think of the teas from Verdant, so all hope is not lost!

The flavour appears to be much the same as well, although perhaps not quite as strong. I’m pleased about this similarity in flavour, because that means that I Like Dragonwell. And now I want to run upstairs and grab any dragonwell samples I can find and see if they taste similar! I did just get one from Teavivre….

Anyways, to specifically describe the flavour, it is a little bit vegetal, with some rock sugar sweetness poking through. The sort of vegetal here (and in Verdant’s dragonwells) is almost a sort of crisp-cooked veggie, where some of the raw flavour has been cooked away, but it’s still crunchy. Snow peas or asparagus come to mind here, but it’s probably more the former as there isn’t a sulfury flavour or aroma. There’s only the barest hint of astringency here, and I’m only noticing it as I’m finishing the cup, so perhaps it’s because some little leafy pieces snuck through my brewing basket(?)

Mmmm, either way this is a good cup. I prefer Verdant’s version probably because it’s a little greener and sweeter, but this one is likely a good bit cheaper. Doesn’t matter for a while anyhow, because I have quite a bit from various sources to drink up before I even contemplate another purchase!

ETA: Second infusion (I have no idea of the parameters, whoops) was only consumed once cold, so it’s unfair to judge it (it wasn’t great). The leaves seemed pretty aromaless and spent afterward, so that’s as far as I went. I suspect the second infusion, drank in a more timely manner, would have been just fine, so I’d take this tea to two again next time.

Uncharacteristically in the mood for a mellow tea today. This one was sweet, vegetal and roasty. Everything a dragonwell should be.

I bet that looked so pretty in your big, clear, Breville!:)

Dragon well is one of my favorite mellow teas!

The liquor of this tea is a perfect green. It’s one of the best smelling green teas I’ve had in a while. The taste is so smooth and fresh and light and satisfying. At the end of the tea pot you get the pan fried taste. It’s my favorite green tea. Rishi does Dragon Well very well. One of their Dragon Well green teas won first place and another one second place in the World Tea Championship in Las Vegas in 2009. I don’t suspect that this is one of them but it still is an amazing green tea! I love it!

Got this at a small cafe while waiting for the gas company to turn off my gas service. It’s not the best Dragon Well tea I’ve had but it’s not bad. There is a nice sweet grass taste to it with a nice light mouth feel. This woke me up nicely and complemented my reading rather well.

Drank this yesterday. I got some of the salty notes but it just tasted very faint. This would be one of my first dragon well teas. Is the flavor supposed to be very delicate? I am going to hold off on rating until I try this again…

Morning tea has to be different than tea throughout the day, don’t you think? It has to be a spot on. Freshly brushed teeth, empty stomach… It just sets the tone. I’ve seen the Rishi brand around a lot so I picked some up to give it a try. I have to say as a morning tea, this was a letdown. It’s not bad, it’s just mainstream. It’s good wholesome tea, but nothing special.

I completely agree. Matcha is my morning cup…er… bowla!:)

my first loose green tea, and i was disappointed (i think the ladies know what i’m talking about ;)). bland and doesn’t steep for many sessions.

Has a great nose. It’s light and a tad sweet.

So so sooo good!

This is a green tea that didn’t have that punch-you-in-the-face grassy taste… it tasted more like buttered toast. It still had a nice, crisp, fresh taste though. It was oh so smooth; no bitterness or astringency.