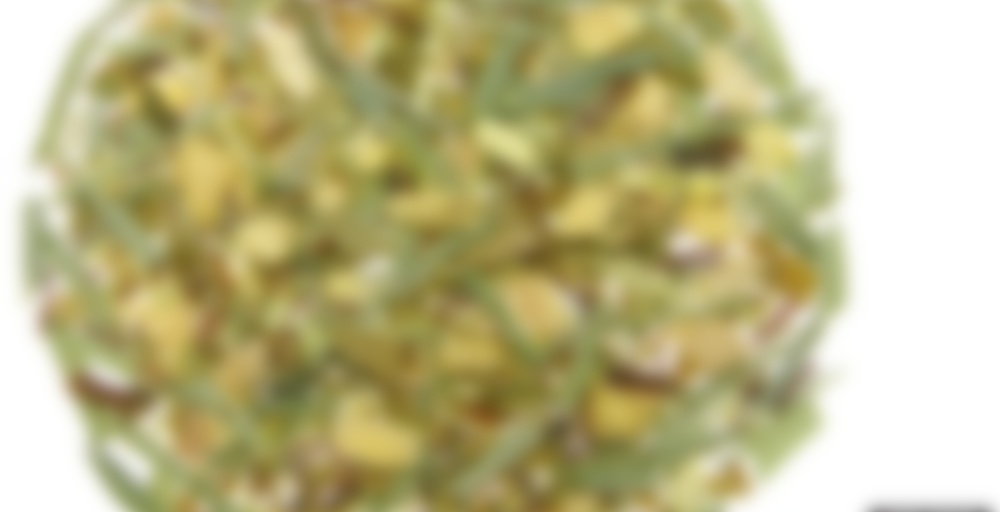 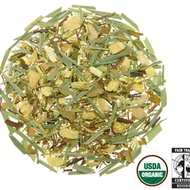 The dry and pleasantly flavored West Indian Lime variety gives our Organic Ginger Lime Rooibos a unique and zesty citrus flavor with notes of ginger and rare spices. The brilliant turmeric yellow and orange infusion glows in the cup and has wonderfully refreshing notes of tropical fruits and spices. The unique flavor of this rare lime variety is thirst quenching and known to enhance circulation and immunity. Get the juices flowing with this stimulating yet caffeine-free blend of antioxidant-rich and longevity-enhancing botanicals.

This Rooibos was a pleasant surprise…I generally do not drink Rooibos, but I had a sample, so I brewed it up and it was good. This tea is fruity and flavourful with a great lime taste and ginger. Will I buy it…no…but, I would drink it again if it was offered.

Ginger Lime Rooibos is delicious! Its sweet but still tart enough to not be juice like, I enjoy it on hot days and it’s delicious iced.

Lovely light tea; the ginger dominates the aroma in both the loose leaf and brewed form, but the lime can definitely be smelled and tasted. The ginger is sharp, but the lime adds a really nice balance that builds up the more you drink it. Would consider adding a teaspoon of honey to my cup but it’s not necessary.

Strong lemon/lime and spicy ginger. Can’t discern any rooibos. This would be be great as a replacement for pickled ginger in between bites of sushi. Very zesty!

This flavor combination has me intrigued.

Hmm, lime and ginger with no rooibos taste? Between your suggestion of replacing sushi gari and that this would be amazingly refreshing iced, I have the idea of a summer sushi lunch stuck in my head. Yum!

yummy, refreshing, gingery. I love ginger. tart from the lime.

Thank you to rosebudmelissa for this sample (and really the whole box of samples she sent me. I told her I enjoyed ginger and she really delivered!).

I have been getting a little more into herbal teas lately. I was diagnosed with IBS (along with my ulcerative colitis) this summer and caffeine is kicking me double time. It used to be when my UC was in remission, I could have caffeine with relatively few side effects. Now, with IBS, even when my UC is in remission, caffeine still can affect my tummy. SO, even though I prefer my dark, roasty teas, lately I will alternate in a ginger type herbal tea so as to limit my caffeine consumption. It’s really unfortunate but what are ya gonna do?

This tea is very pleasant. The ginger is there throughout the sip but not in an overpowering way (though, that is subjective since I am a ginger freak. What seems mild to me is probably strong to some others). The lime also gives it a pleasant citrus tang in the middle of the sip. There is a nice throat coating that kind of reminds me of licorice (I guess I should have read all the ingredients first to know if licorice is actually in here) but doesn’t have a noticeable licorice taste.

Overall, this is a tea I could drink often, especially when I need to give my stomach a break.

This starts out nice, but has a wierd aftertaste that includes my nemesis, licorice root. Might be better if I steeped it for a shorter amount of time.

Before I drank “real” tea, my hot beverages of choice were brewed from a few varieties of herbal unsweetened teabags from Yogi tea. Lemon Ginger was among my top three favorites. Translate that flavor combination to a loose leaf blend with a much higher price tag (theoretically correlating to freshness and quality), and it seems that my expectations grew with every minute of steep time.

And that was my lesson: watch those expectations. Whether positive (as in this example) or negative (such as dreading a family gathering), expectations get in the way of simply allowing something to be what it is.

Because really, this tea was fine. It was me that tried to shape it instead of appreciating it for what it is. No off flavors. Nothing overpowering. Lightly flavored: I first brewed 1 heaping tsp with 8oz of water, and then after seeing that Rishi recommended a full tbsp, brewed as directly. Seems like that would have made a big difference, but I didn’t notice much.

The ginger is apparent (though I wouldn’t consider it spicy by any means). There’s some lime; it’s neither tart nor fragrant. Its quietness surprises me, since West Indian Lime seems to be used predominantly as a fragrance, and since the ingredient list also contains lemongrass and lemon myrtle. But perhaps Rishi was going for a quiet, balanced blend. Another ingredient, licorice root, is also subtle in this cup — seemingly adding only the slightest sweetness and its flavor nearly undetectable even to this fan of tisanes containing licorice. I would not have known that the blend includes green rooibos, perhaps because I am new to rooibos. At the end I added a couple spoonfuls of simple syrup, and somewhat predictably I found that to increase my enjoyment.

Curious what my tastebuds would think of it now, the aforementioned Yogi Lemon Ginger became my next cup. Far more flavorful and entirely tasty — still quite a pleasant cup, despite a “best before” date of October 2014. It’s bright, spicy, and naturally sweet, since this blend also includes licorice root (and evidently a larger amount and/or more potent source). The peppermint leaf and black pepper, both near the bottom of the ingredient list, are barely there — I doubt I would have been able to place them without having read the label. There are plenty of teas that captivate me now, but I’ll hang on to these old teabags, especially for those times when I’m sniffling or away from home.

Fruity, sweet & delicious! Definitely a spicy ginger kick, this sweet brew is practically a dessert unto itself!